There are many reasons why the Roaring Twenties are an unforgettable era: The Flappers, the New Age Jazz, the prohibition etc, and the cool dance moves.

Originating among African-Americans in the rural South, the Black Bottom eventually was appropriated by white society and became a national craze in the 1920s.

The dance originated in New Orleans in the first decade of the 20th century. Jelly Roll Morton, jazz player and composer, wrote the tune “Black Bottom Stomp” with its name referring to Detroit’s Black Bottom area.

“The Original Black Bottom Dance” was printed in 1919. It came from an earlier dance called “Jacksonville Rounders’ Dance” printed in 1907. The word “Rounder” was a synonym for “pimp.” Both “dance-songs” were written by black pianist, composer and dancer Perry Bradford and were based on a dance done in Jacksonville, Florida “way back.” One professional dancer stated, “That dance is as old as the hills.”

Sheet music from the mid-20s identifies the composers as Gus Horsley and Bradford and claims the dance was introduced by the African American dancer and choreographer Billy Pierce. The sheet music’s cover photograph features dancer Stella Doyle, who performed primarily in cabarets.

The dance was most famously performed by Ziegfeld Follies star Ann Pennington, who danced the Black Bottom in aBroadway revue put on by Zeigfeld’s rival George White in 1926.

Waltz is one of the five dances in the Standard (or Modern) category of the International Style ballroom dances. It was previously referred to as Slow Waltz or English Waltz.

Waltz is usually the first dance in the Dancesport competition rounds. It is danced exclusively in the closed position, unlike its American Style counterpart.

Salsa is a popular form of social dance that originated in New York with strong influences from Latin America, particularly Colombia, Cuba andPuerto Rico. The movements of salsa have its origins in Cuban Son, Cha-cha-cha, Mambo and other dance forms, and the dance, along with the salsa music, originated in the mid-1970s in New York

The Charleston was  named after Charleston, South Carolina. The rhythm was popularized in mainstream dance music in the United States by a 1923 tune called “The Charleston” by composer/pianist James P. Johnson which originated in theBroadway show Runnin’ Wild and became one of the most popular hits of the decade.  The peak year for the Charleston as a dance by the public was mid-1926 to 1927.  Charleston mostly was being danced by Flappers at the Jazz Clubs.

5.The Foxtrot – you’ll note the smoothness of this dance.

This is a smooth, progressive dance characterized by long, continuous flowing movements across the dance floor. It is danced to big band (usually vocal) music. Usually danced to big band music. It is similar to the waltz, except in a 4/4 time signature. The dance was premiered in 1914, quickly catching the eye of the husband and wife duo Vernon and Irene Castle, who lent the dance its signature grace and style. The exact origin of the name of the dance is unclear, although one theory is that it took its name from its popularizer, the vaudeville actor Harry Fox. 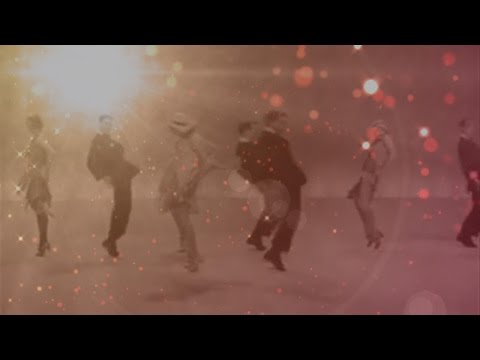