People fought for it, gave their lives for it, and succeeded: The American Dream.  Some people today still believe they are fighting for the American Dream; not stopping until they succeed.

The area is now known as the 100th Meridian, for the delineation that divides U.S. land east of the arid plains from that to the west.  This is where countless families picked up and set out for during the 19th Century, in search of better land after the Homestead Act passed.

This was a major part of U.S. history and is home to many people’s descendants.  The people who partook in the movement built new lives from scratch in order to achieve their American Dream.

The 100th Meridian runs through North Dakota, South Dakota, Nebraska, Colorado, Texas, and New Mexico.  Some of the shells of the homes and towns where people settled are still standing today. Some of the buildings still standing were grocery stores, sod houses, buildings made of brick and mortar, and schoolhouses.  Despite how much time has passed since anyone has used the buildings or lived there, they seem to be undamaged by nature.

The photographer who documented the entire 100th Meridian also retrieved the history of each photo he took.  Some of the most important items included in his collection are below.

The picture is of a home that has been called The Yellow Porch.  It still stands in Sheridan County, Nebraska.  It was built in 1890 by John Butler and was actually used in the illegal sale of alcohol during the Prohibition. 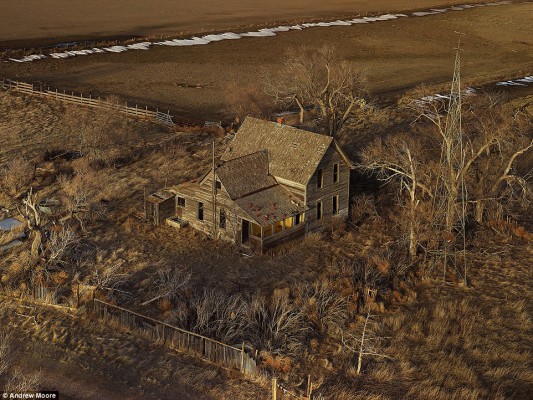 The site of The Yellow Porch, Sheridan County, Nebraska, was first built on in 1890 by homesteader John Butler and was used to sell alcohol during Prohibition. It is now a relic of the pioneering homesteaders who set up their lives on the 100th Meridian. Image credit @Andrew Moore

A barn is still standing on the land originally patented during the Homestead Act.  Although it is a little rough and is starting to cave in, it is truly a sight to see.  It was built over 100 years ago. 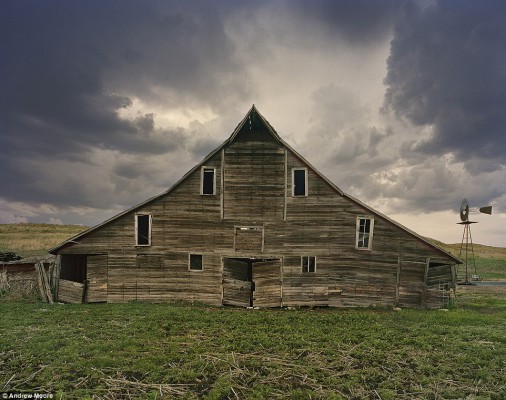 A location in Rock County, Nebraska is another piece of land that was acquired during the Homestead Act. Many people go to a cattle ring to buy and sell their cattle. The community is so tight that the men and women will stay from start to finish to show their neighbors how respectful they are. A sod house still lies in ruins in Sioux Country, Nebraska.  It is the original that was built during the “100th Meridian”.  When the photographer went to the sod house, it appeared to be vacant except for a now-dead coyote.  Right next to the sod house is a store that opened in 1930 and is still open and successful today.

This house is still standing from as far back as 1911, when it belonged to T.P. Murray.  How do people know whose house it was? The man’s name is still on a sign above his doorway.  The concrete home was built in Rushville, Nebraska. In Sheridan County, Nebraska, a rancher from Peru still herds sheep with a wagon drawn by his two dogs.  Again, it was the original land used in the 100th Meridian. 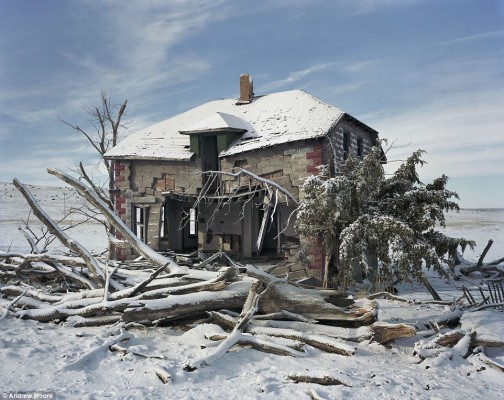 Susie Fehr Grossenbacher’s homestead in Sheridan County was known for its raucous parties and dances, but now looks more than a little worse for wear. Image credit @Andrew Moore

Despite the rapid wildfires that took place in Dawes County, Nebraska, one can imagine how many people once lived in the dense, wooded area in the 19th Century.

In Dirt Meridian, Andrew Moore takes to the air to document the High Plains of North Dakota, South Dakota and Nebraska in a series of stunning, large-format photographs. The “meridian” of the title refers to the 100th meridian, the longitude that neatly bisects the US and has long been considered the dividing line between the East and West. Much of the meridian traverses America’s so-called flyover country, those sparsely populated landscapes between the urban centers on either coast. Other parts of the meridian cross contentious zones such as the heavily fracked Bakken formation in North Dakota. 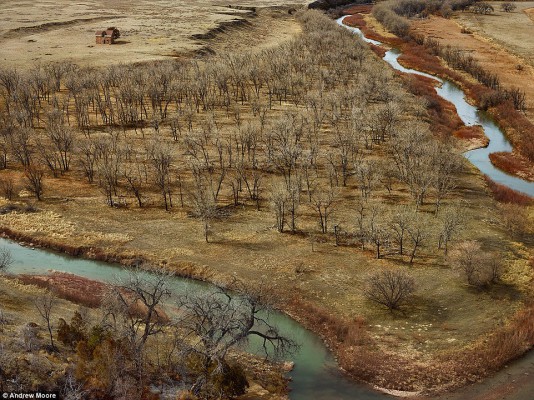 In the United States the meridian 100° west of Greenwich forms the eastern border of the Texas panhandle with Oklahoma (which traces its origin to the Adams-Onís Treaty in 1819 which settled the border between New Spain and the United States between the Red Riverand Arkansas River). Dodge City, Kansas lies exactly at the intersection of the Arkansas River and the 100th meridian.

In the central Great Plains, the meridian roughly marks the western boundary of the normal reach of moist air from the Gulf of Mexico. Historically the meridian has often been taken as a rough boundary between the eastern and western United States. White settlement, spreading westward after the American Civil War, settled the area around this meridian during the 1870s.

The scale of the plains: check A schoolhouse (bottom right) which was last used in 1966 by local ranching families is left abandoned in Cherry County, Nebraska. Image credit @Andrew Moore

Dirt Meridian interweaves two stories: the myths and history of the vast, severe American High Plains alongside portraits of the people who live there today. Along the way, Moore worked with ranchers, farmers, crop dusters, game wardens, writers and historians to capture the mythology and reality of the High Plains. Many photographs in this book were taken using a specially modified camera in a low-flying plane; the resulting pictures, with their literal bird’s-eye view, offer a unique perspective on this quintessential, seemingly boundless American landscape.

« Stonehenge may have been erected in Wales 500 years before being moved to southern England
Eerie and extremely poignant portraits of patients in the “mental asylum” in Victorian England, 1869 »