The 1940 Tacoma Narrows Bridge, the first Tacoma Narrows Bridge, was a suspension bridge in the U.S. state of Washington that spanned the Tacoma Narrows strait of Puget Sound between Tacoma and the Kitsap Peninsula. It opened to traffic on July 1, 1940, and dramatically collapsed into Puget Sound on November 7 of the same year. At the time of its construction (and its destruction), the bridge was the third longest suspension bridge in the world in terms of main span length, behind the Golden Gate Bridge and the George Washington Bridge.

The desire for the construction of a bridge between Tacoma and the Kitsap Peninsula dates back to 1889 with a Northern Pacific Railway proposal for a trestle, but concerted efforts began in the mid-1920s. The Tacoma Chamber of Commerce began campaigning and funding studies in 1923. Several noted bridge engineers, including Joseph B. Strauss, who went on to be chief engineer of the Golden Gate Bridge, and David B. Steinman, who went on to design the Mackinac Bridge, were consulted. Steinman made several Chamber-funded visits, culminating in a preliminary proposal presented in 1929, but by 1931, the Chamber decided to cancel the agreement on the grounds that Steinman was not sufficiently active in working to obtain financing. Another problem with financing the first bridge was buying out the ferry contract from a private firm running service on the Narrows at the time.

Construction on the bridge began in September 1938. From the time the deck was built, it began to move vertically in windy conditions, which led to construction workers giving the bridge the nickname Galloping Gertie. The motion was observed even when the bridge opened to the public. Several measures aimed at stopping the motion were ineffective, and the bridge’s main span finally collapsed under 40-mile-per-hour (64 km/h) wind conditions the morning of November 7, 1940. 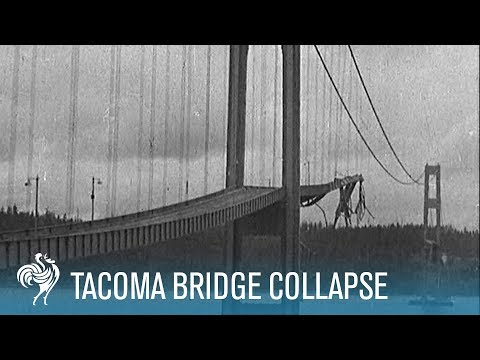 Following the collapse, the United States’ involvement in World War II delayed plans to replace the bridge. The portions of the bridge still standing after the collapse, including the towers and cables, were dismantled and sold as scrap metal. Nearly 10 years after the bridge collapsed, a new Tacoma Narrows Bridge opened in the same location, using the original bridge’s tower pedestals and cable anchorages. The portion of the bridge that fell into the water now serves as an artificial reef.

The bridge’s collapse had a lasting effect on science and engineering. In many physics textbooks, the event is presented as an example of elementary forced resonance, with the wind providing an external periodic frequency that matched the bridge’s natural structural frequency, though the actual cause of failure was aeroelastic flutter.Its failure also boosted research in the field of bridge aerodynamics-aeroelastics, the study of which has influenced the designs of all the world’s great long-span bridges built since 1940.

Leonard Coatsworth, a Tacoma News Tribune editor, was the last person to drive on the bridge:

No human life was lost in the collapse of the bridge. Tubby, a black male cocker spaniel, was the only fatality of the Tacoma Narrows Bridge disaster; he was lost along with Coatsworth’s car. Professor Farquharson and a news photographer  attempted to rescue Tubby during a lull, but the dog was too terrified to leave the car and bit one of the rescuers. Tubby died when the bridge fell, and neither his body nor the car were ever recovered. Coatsworth had been driving Tubby back to his daughter, who owned the dog. Coatsworth received US$450.00 (US$7,600 with inflation  for his car and US$364.40 (US$6,200 with inflation  in reimbursement for the contents of his car, including Tubby.

« New technology being used to find mystery behind the pyramids
During WWI The Indian Army was one of the two largest volunteer armies in the world! … »