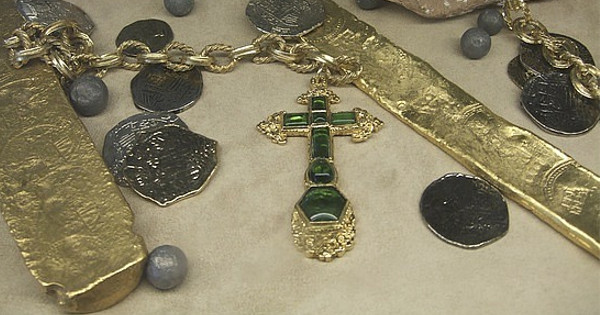 Who doesn’t love stories of ancient buried treasure? Two park rangers in Costa Rica were patrolling a national park after a recent storm when they uncovered five wooden chests, among other treasures.  This find is one of the most extensive in modern times. The treasure consisted of gold and silver coins, ingots, jewelry, candlesticks and religious items.  Historians believe that the entire collection is worth about 200 million dollars.

The national park is located on Cocos Island which is near the Pacific Ocean off the shore of Costa Rica.  The area has long been known for its history of possible buried treasure; mostly legends until recently.  Since the 1970s there has been a law in place forbidding treasure hunting.

The specialists found that there are 89,000 coins and artifacts.  There were also 36 crosses, three chalices, and two life-sized gold statues of Mary holding the baby Jesus.

Although some believe that the treasure was from pirates, historians believe it could be some of the missing treasure of Lima.  An army under the command of Jose de San Martin was heading for Lima in 1820.  Viceroy Jose de la Serna entrusted the treasure to the British trader Captain William Thompson in order to keep it safe while the Spaniards secured the country. The original plan didn’t go as well as anticipated; Thompson’s crew ended up killing Viceroy’s men and sailed to the island where the treasure was buried.

Because of this legend many attempts were made to recover the hidden treasure and, for the most part, all failed.  One of the men who tried to recover the treasure was a Prussian named August Gissler. He actually lived on the island from 1889 to 1908, trying to find the treasure. He only managed to uncover several gold coins. (World News Daily Report)

Considering the treasure was found in a national park, all of the treasure is the property of the Costa Rican government.  It will eventually go on display at one of the national museums in San Jose.  Luckily for the rangers, they will get a reward for recovering it. According to the legend, with the army of José de San Martín approaching Lima in 1820, Viceroy José de la Serna is supposed to have entrusted the treasure of the city to the British trader, Captain William Thompson, for safekeeping until the Spaniards could secure the country. Instead of waiting in the harbor as they were instructed,Thompson and his crew killed the Viceroy’s men and sailed to Cocos island, where they buried the treasure.

Hundreds of attempts to find treasure on the island have failed. Prussian adventurer August Gissler lived on the island for most of the period from 1889 until 1908, hunting the treasures with the small success of finding six gold coins.

Since it was discovered in a National park, the totality of the treasure is now the property of the Costa Rican government, and it should be exposed at the Museo Nacional de Costa Rica, in San José. The rangers who discovered the treasure have been promised a reward for their role in the finding, but the amount of the reward remains undisclosed.

« Acoustic locator – Detecting enemy aircraft before the invention of Radar …
WWII Shipwreck near London 1,400 tons of TNT on Board (Including 286 Blockbuster Bombs) Which “could be detonated by a collision” »