A tailless, two-seat, single-engine, pusher configuration roadable aircraft was built in the US in the late 1930’s, the Waterman Arrowbile, and was one of the first of its kind. Only five were produced, one slightly different from the other, especially in the body work.  However, Waldo Waterman’s invention generated little customer interest. The prototype in 1932, named “Whatsit” for his unconventional design, open the way to the “Arrowbile” in 1935 designed and built for a contest announced by the US department of commerce. It was a low swept-wing monoplane with fins near its wing tips. The Whatsit also featured a wing-mounted tricycle undercarriage and a trim foreplane and it was powered by a 100 hp (75 kW) Kinner K-5 5-cylinder radial pusher engine. In May 1935, Waterman completed a submission to the government funded Vidal Safety Airplane competition. This was the Arrowplane, sometimes known as the W-4. This adopted basically a similar layout to the Whatsit but had a strut braced high wing on a blunt-nosed, narrow fuselage pod with a tricycle undercarriage mounted under it. Its wings had wooden spars and metal ribs and were fabric covered, with triangular endplate fins carrying upright rudders. Its fuselage was steel framed and aluminium covered. It was powered by a 95 hp (71 kW) inverted inline 4-cylinder Menasco B-4 Pirate pusher engine mounted high in the rear of the fuselage. The Arrowplane was not intended for production or to be roadable, but its success in the Vidal competition encouraged Waterman to form the Waterman Arrowplane Co. in 1935 for the production of a roadable version. The resulting Arrowbile referred to by Waterman as the W-5, was similar both structurally and aerodynamically to the Arrowplane, though the fins differed in shape, with rounded leading edges and swept-back rudder hinges. For road use, the wings and propeller could be quickly detached. On the ground, the engine drove the main wheels through a differential gear, as normal, and the car was steered by its nosewheel. The wheels were enclosed in fairings, initially as a road safety measure. Instead of removing the propeller for the road, it could be de-clutched to prevent it windmilling the engine at speed.

The wheel in the two-seat cabin controlled the Arrowbile both on the road and in the air and the cabin interior was designed to motor car standards, with easy access and a baggage space under the seats. The Arrowbile first flew on the 21st of February 1937, making it a close contemporary of the Gwinn Aircar, and, after that, the second prototype with a number of minor modifications followed. Studebaker, an American wagon, and automobile manufacturer, were interested in the Arrowbile because of the use of their engine and ordered five. The third Arrowbile was the first of this order. the first three Arrowbiles flew from the factory at Santa Monica to the National Air Races venue at Cleveland, a great circle distance of about 2,060 mi (3,315 km). The first force landed en route, but the other two reached the races and gave demonstration flights. The fourth Aerobile was completed as a conventional, non-roadable aircraft; Waterman initially retained the Studebaker engine but in 1941 replaced it with an air-cooled 120 hp (89 kW) Franklin. In 1943, he modified the wings with slotted flaps and later still replaced the braced wing with a cantilever one, using the wing from the unbuilt fifth aircraft. The last, sixth aircraft was not completed and flown until May 1957. It was a three-seat, roadable version powered by a water-cooled 120 hp (89 kW) Tucker-Franklin. This was cooled by radiators on each side of the engine, fed air by fuselage side scoops. In the absence of the forward radiator, the nose was remodelled, becoming shorter and blunter. The fins were also altered so that the upper and lower leading edges met at an acute angle. At some point, this particular Arrowbile was renamed the Aerobile, though it was not a name that Waterman used. 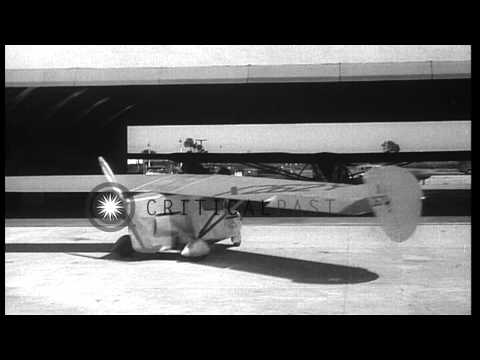