The date was 1497 and the emperor, Ahuitzotl, stood in the Sacred Precinct of the great temple Templo Mayor, built in the center of the Mayan capital, Tenochtitlan.

He had just completed the sixth set of major renovations to the temple; it now had four sloped terraces, giving it a silhouette similar to the pyramids in Egypt.  On top of the terraces, instead of a sharp point, there was a huge platform measuring approximately 100 by 80 feet. Built into the platform were two shrines, one dedicated to the god of water, Tlaloc, and the second to the god of war and of the sun, Huitzilopochtli.

Each shrine stood a couple of hundred feet high and was guarded by braziers containing everlasting flames, and there were statues of guardians there to protect the shrine.  There were two stairways, one for each shrine, which rose from an intimidating serpent head at the base of the temple and terminated in front of the shrines.

The entire building was covered with stucco and beautifully painted.  Facing the main temple was a circular temple dedicated to Quetzalcoatl, the serpent god who had feathers instead of scales.

The Emperor was exceptionally proud of this shrine to important Aztec deities, and he gave the instruction for the dedication of the temple to begin.  The priests began leading sacrificial victims up the steep stairways and at the top, each victim was laid over an altar and his chest flayed open so that the priest could rip his still beating heart out of his chest to raise it in offering to the gods.

The body was then kicked down the stairs.  Soon the stairs were awash in blood and the bodies of the victims.  Still, the line of prisoners of war stretched along the Sacred Precinct and up the stairs; by the end of the dedication ceremony more than 4,000 people had lost their lives in ritual sacrifice. Ahuitzotl was happy and felt sure that the gods were pleased and that his world of neatly planned cities, running water, refined sanitation that included daily bathing, and magnificent temples would be safe for generations to come.  Sadly, this was not to be the case. In 1519, under the rule of Ahuitzotl’s nephew, Moctezume II, the Spanish conquistadors led by Cortez arrived.

The demise of the Aztec lands was charted in the stars. The Spanish had fought their way from the coast and along the way collected a vast army of the Aztec’s enemies, who chose to fight on the side of the Spanish.  The Spanish were astounded by the size of the Aztec capital city, which was built on a marshy area.  Buildings were erected on top of wooden piles driven into the soft ground; canals and water abounded.

The view must have reminded the Spaniards of Venice as the size and magnificence of the city must surely have rivalled that of the great European city.   Not only was the city a magnificent sight, but there in the very heart of Tenochtitlan lay the Sacred Precinct enclosing its seventy eight sacred buildings and dominated by the magnificent Templo Mayor.

The Spanish were welcomed by Moctezuma, and the Aztecs paid handsomely to stop the Spanish from laying waste to the city.   The Aztecs, in the summer of 1521, rose up against the Spanish and drove them out of the city.  The Spanish were left once again viewing the city from the marshes, but this time they had left sixty-two of their compatriots behind and, as Bernal Díaz wrote in his journal, “The dismal drum of Huichilobos sounded again, accompanied by conches, horns, and trumpet-like instruments.

It was a terrifying sound, and when we looked at the tall cue from which it came, we saw our comrades who had been captured in Cortéz’s defeat being dragged up the steps to be sacrificed. 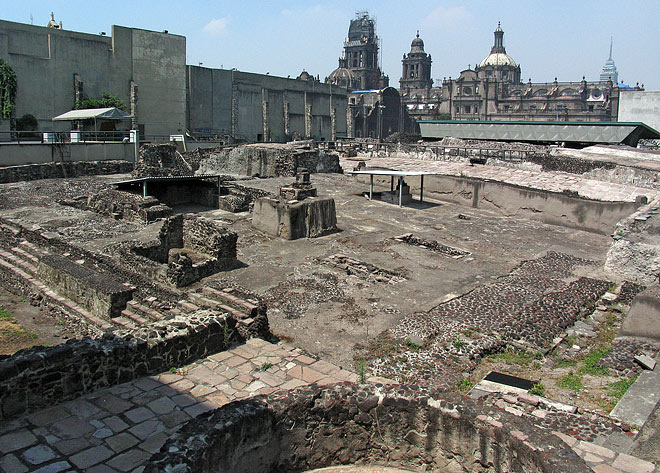 When they had hauled them up to a small platform in front of the shrine where they kept their accursed idols, we saw them put plumes on the heads of many of them; and then they made them dance with a sort of fan in front of Huichilobos.

Then after they had danced, the priests laid them down on their backs on some narrow stones of sacrifice and, cutting open their chests, drew out their palpitating hearts which they offered to the idols before them.”

During this uprising Moctezuma was killed.  Shortly after, the city fell to the Spanish and the Templo Mayor was razed to the ground. The stones were then used to build the Spanish cathedral, Metropolitan Cathedral of the Assumption of Mary, on the site.

Little did the Spanish realize that there were six earlier versions of the temple buried underground.  The surviving Aztecs were decimated, some by being put to the sword but most through the introduction of diseases such as smallpox, against which the Aztecs had no immunity.

Very little work has been done in modern times to try and excavate the old temples.  Some cursory work was done in the late 19th century, and the archaeological digs that took place in the mid-20th century were viewed as irritating by the residents in the area around the old temple.

Only in the last twenty-five to thirty years has there been any systematic research attempted, and that started with the unearthing of an eight-ton stone disc that had been magnificently sculpted with friezes depicting the scattered limbs of the Aztec moon goddess Coyolxauhqui. 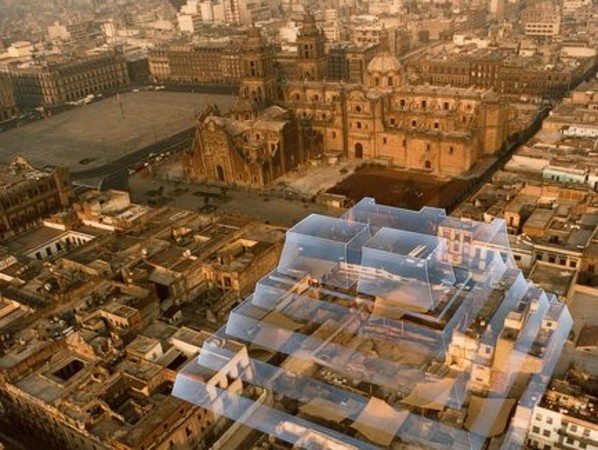 Following this discovery the Mexican president signed a decree giving the wonderfully named archaeologist, Eduardo Matos Moctezuma, permission to excavate around the temple.

He demolished several old houses and found a treasure trove of Aztec artefacts which now reside in the Templo Mayor Museum.  While the research work undertaken in the temple has given archaeologists and palaeontologists an amazing insight into the life and times of the Aztec people, one glaring omission still exists.

No one has ever uncovered the tomb of any of the Aztec rulers.  It is well documented that no less than seven rulers lived in the ancient city of Tenochtitlan, but no ceremonial tombs for any ruler has been found.

In 2013 scholars located a hidden tunnel, and on following the tunnel they unearthed a passage leading to a ceremonial platform called a Cuauhxicalco.  Information gleaned from ancient reports indicates that a Cuauhxicalco was used to burn the corpses of Aztec rulers.

Archaeologists also found two sealed chambers which will, it is hoped, be revealed as the burial chambers of two Aztec rulers.   These chambers will be opened and studied in the coming months, though scholars caution that they have no proof that these chambers hold the cremated remains of the kings.

The Aztec people still live in Mexico and their faces can be seen in the streets of the capital city.  The revelations of the skills and high degree of civilization enjoyed by their ancestors are a testimonial to these ancient people.

Yes, we may view with disdain the practice of human sacrifice, but the Aztecs  were not alone in this practice – many European states have similar practices lodged in their history.  As the research on this temple progresses, we are sure to unearth many more astounding facts about a people who led the southern hemisphere in terms of civilization and education for hundreds of years.

« The Defiance is Remarkably Preserved With Intact Deck Hardware & Cabins, Masts Still Standing …
1,500 years ago Heracleion was said to be a rich and thriving city before it was buried by the sea »