The Imperial Trans-Antarctic Expedition  also known as the Endurance Expedition, is considered the last major expedition of the Heroic Age of Antarctic Exploration. Conceived by Sir Ernest Shackleton, the expedition was an attempt to make the first land crossing of the Antarctic continent. After the conquest of the South Pole by Roald Amundsen in 1911, this crossing from sea to sea remained, in Shackleton’s words, the “one great main object of Antarctic journeyings”.The expedition failed to accomplish this objective, but became recognised instead as an epic feat of endurance.

Sir Ernest Henry Shackleton  was a polar explorer who led three British expeditions to the Antarctic, and one of the principal figures of the period known as theHeroic Age of Antarctic Exploration.Born in County Kildare, Ireland, Shackleton and his Anglo-Irish family moved to Sydenham in suburban south London when he was ten. His first experience of the polar regions was as third officer on Captain Robert Falcon Scott’s Discovery Expedition 1901–04, from which he was sent home early on health grounds, after he and his companions Scott and Wilson set a new southern record by marching to latitude 82°S. 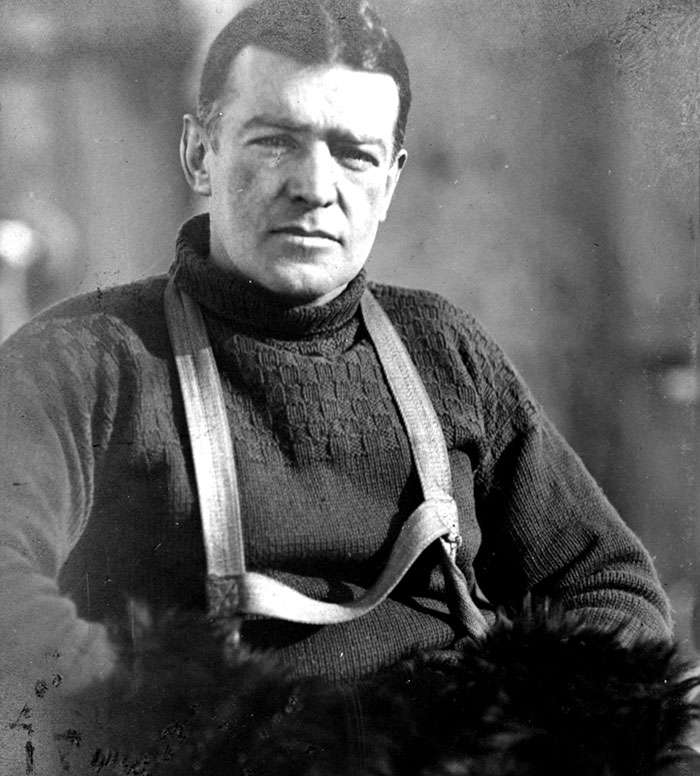 In this new expedition Shackleton proposed to sail to the Weddell Sea and to land a shore party near Vahsel Bay, in preparation for a transcontinental march through the South Pole to the Ross Sea. A supporting group, the Ross Sea party, would meanwhile travel to the opposite side of the continent, establish camp in McMurdo Sound, and from there lay a series of supply depots across the Ross Ice Shelf to the foot of the Beardmore Glacier. These depots would be essential for the transcontinental party’s survival, as the party would not be able to carry enough provisions for the entire crossing. The expedition required two ships: Endurance under Shackleton for the Weddell Sea party, and Aurora, under Captain Aeneas Mackintosh, for the Ross Sea party. 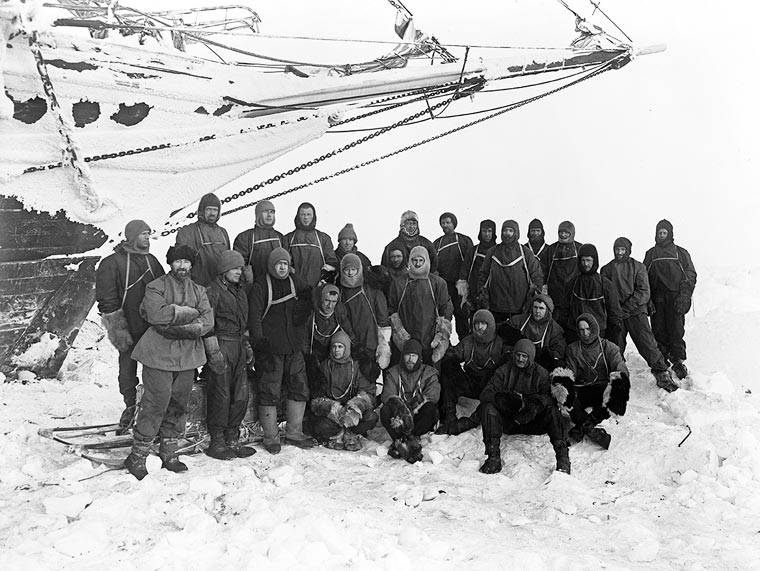 Alongside Shackleton  was the australian photographer and adventurer Frank Hurley who was the official photographer on  Imperial Trans-Antarctic Expedition.

Royal Geographic Society to honour the achivemnts of Sir Ernest Shackleton and the team of the Endurance Expedition of 1914-1917 is holding an exibition entitled  The Enduring Eye. The exbition is opened from November, 2015 and will run until 28 February 2016. The photos that you are about to see in below, are just a small part of the exibition that documents the aspects of the team ’s epic travail for survival. 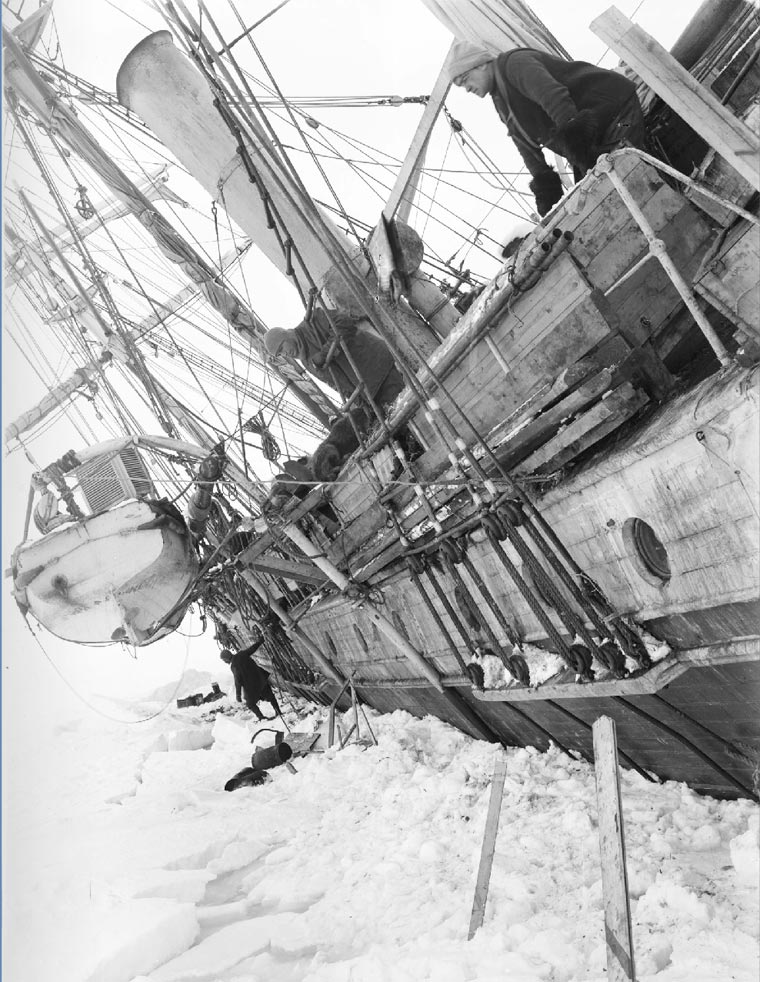 Endurance became beset in the ice of the Weddell Sea before reaching Vahsel Bay, and despite efforts to free it, drifted northward, held in the pack ice, throughout the Antarctic winter of 1915. Eventually the ship was crushed and sank, stranding its 28-man complement on the ice. After months spent in makeshift camps as the ice continued its northwards drift, the party took to the lifeboats to reach the inhospitable, uninhabited Elephant Island. Shackleton and five others then made an 800-mile (1,287 km) open-boat journey in the James Caird to reach South Georgia. From there, Shackleton was eventually able to mount a rescue of the men waiting on Elephant Island and bring them home without loss of life. On the other side of the continent, the Ross Sea party overcame great hardships to fulfil its mission. Aurora was blown from her moorings during a gale and was unable to return, leaving the shore party marooned without proper supplies or equipment. Nevertheless, the depots were laid, but three lives were lost in the process. 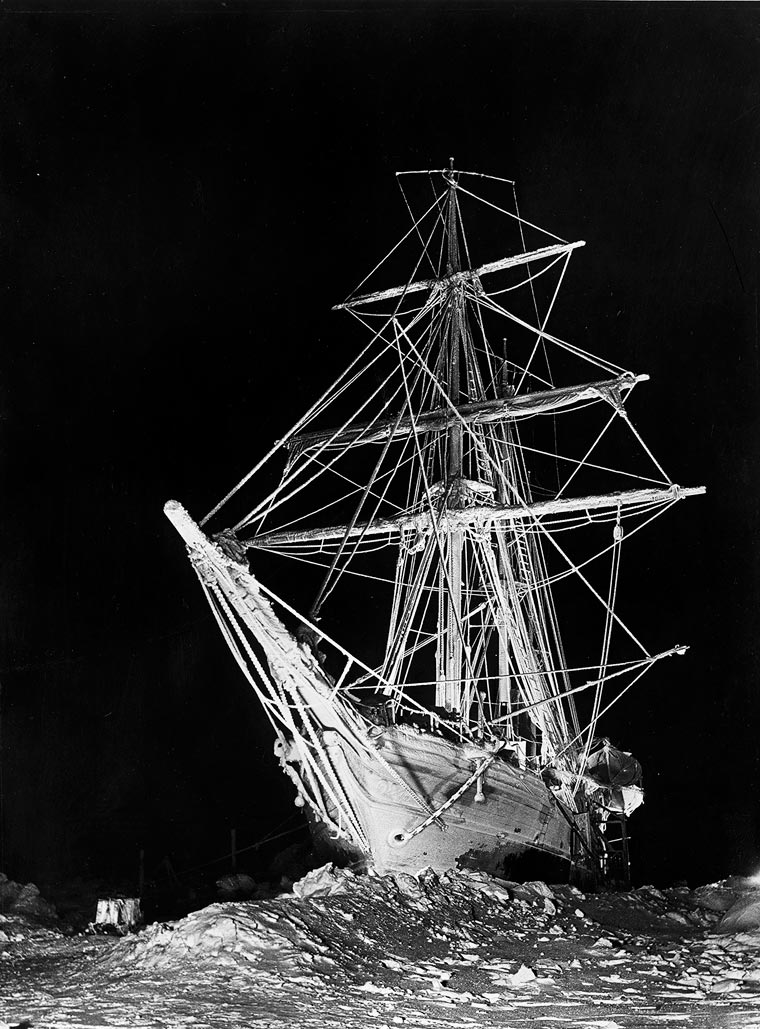 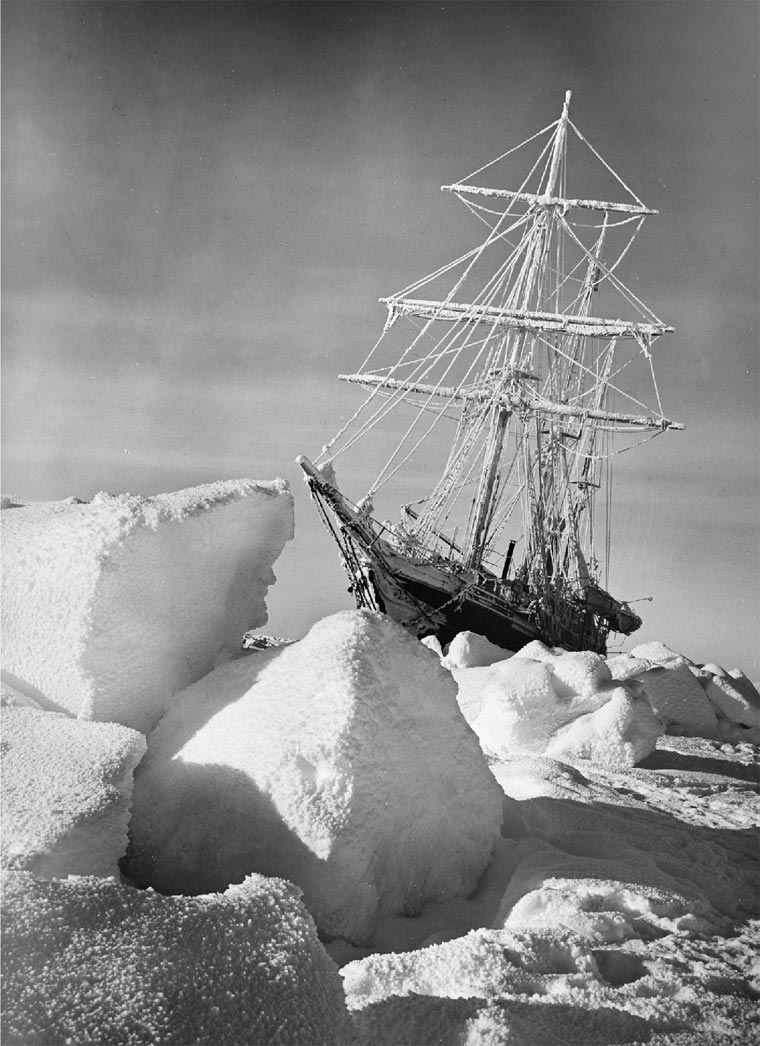 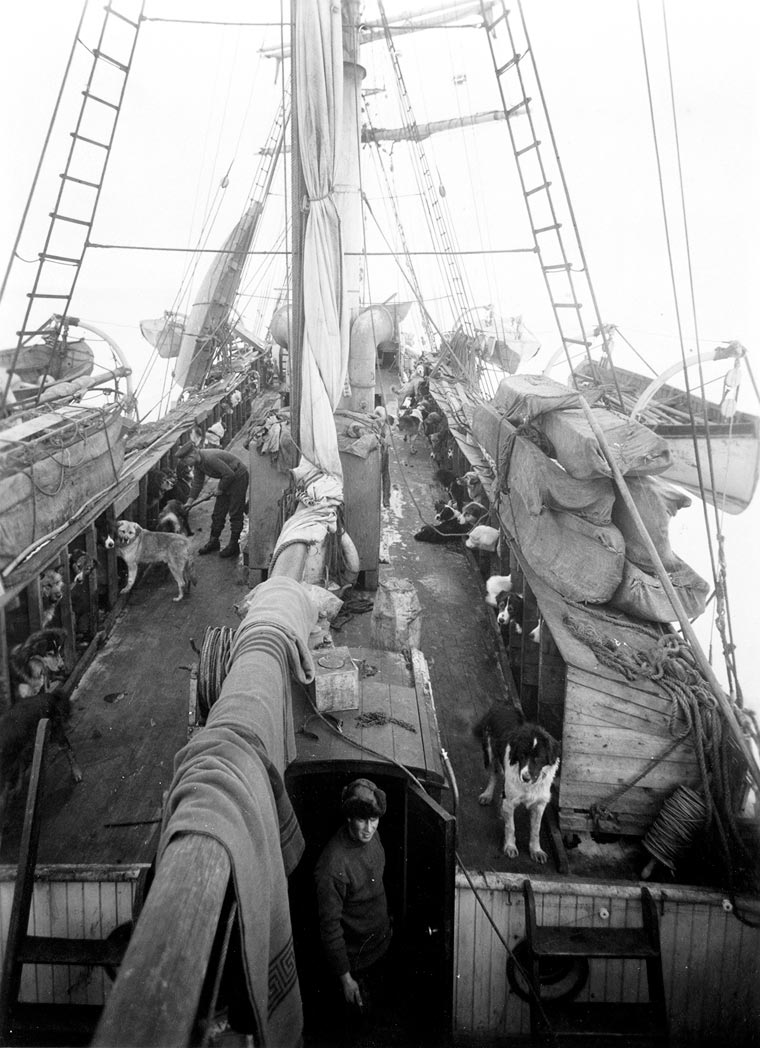 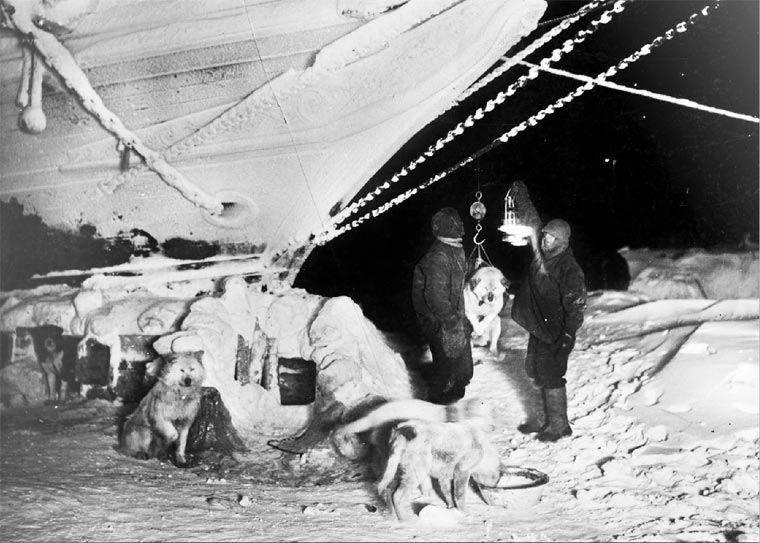 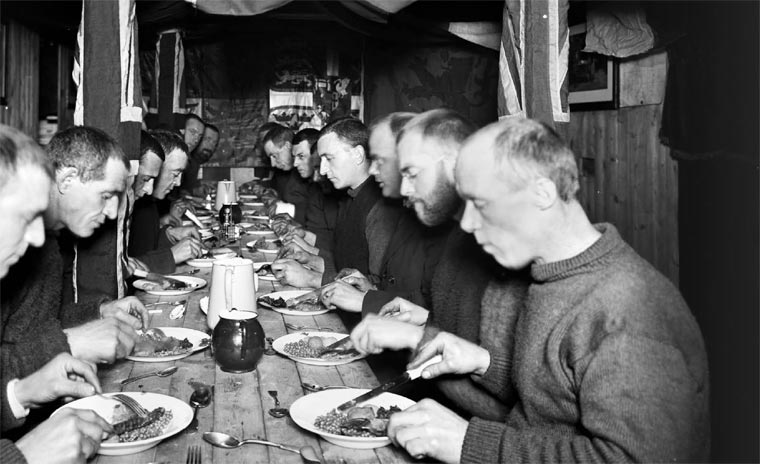 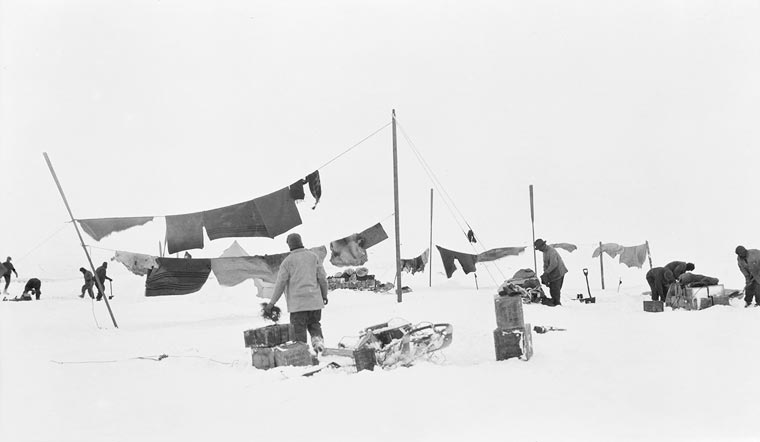 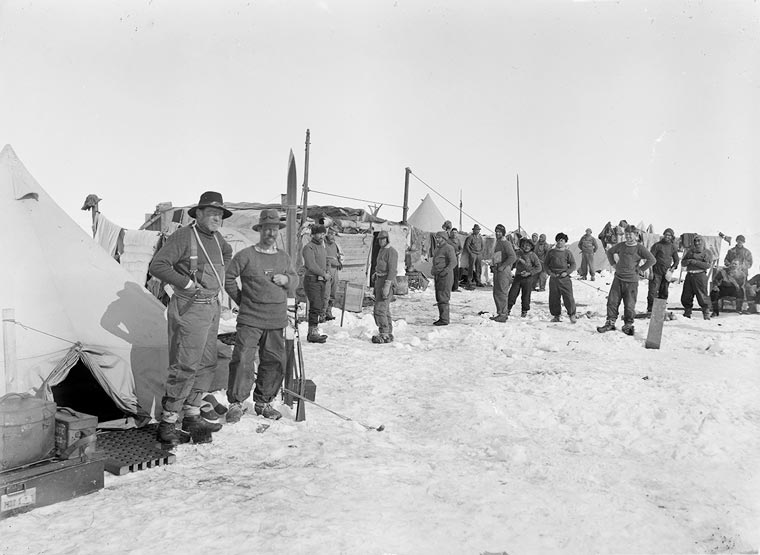 « Malaysia is searching for mystery owner who abandoned three Boeing 747 at the Kuala Lumpur International Airport (KLIA) …
The U.S. had “Backpack Nukes” that would be carried to battlefields during the cold war. … »