Thomas Edison once had plans to make the statue talk: 10 things you probably didn’t know about the Statue of Liberty

As one of the biggest tourist destinations in the world, with approximately 4 million people visiting each year,  Statue of Liberty is one of the most iconic symbols and one of the most recognizable monuments in the world. The statue is seen around the world as a symbol of American values, such as freedom and democracy. Here are ten things that you probably didn’t know about Lady Liberty.

1. The statue’s torch was exhibited in Philadelphia.. and she almost ended up there 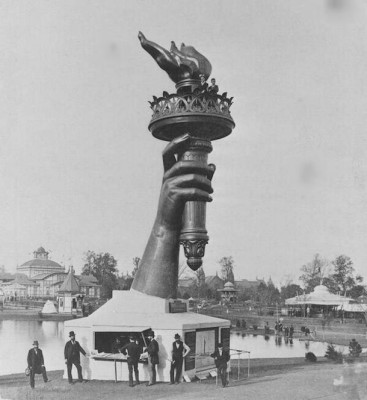 The torch was exhibited at the 1876 world’s fair in Fairmount Park, Philadelphia and the visitors could buy tickets to climb a ladder in the statue’s arm up to the torch. With the funds raised from that exhibit, Bartholdi finally had enough money to build the statue’s head. He was so satisfied with Philadelphia’s reception to the statue that for a time he considered giving it to them instead of New York.

2. The statue was originally supposed to be a lighthouse 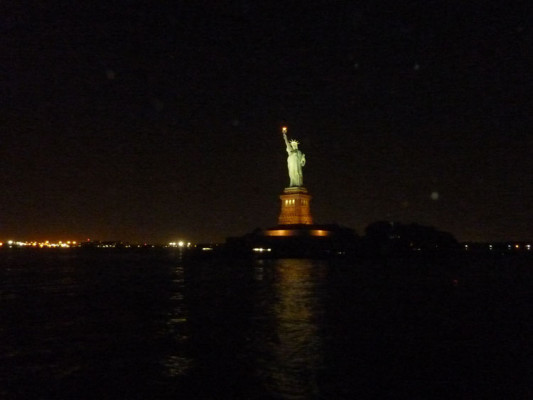 Everyone is familiar with the Statue of Liberty as a symbol of the promise of America, but few are probably aware that, for a few years early in its existence, it was also officially a lighthouse operated under the authority of the Lighthouse Board. The lighted torch in Lady Liberty’s right hand had, and still has, great symbolic significance, but at its beginning, it was also used as a navigational aid for ships entering New York Harbor. However, the engineers were never able to successfully light it enough to serve that purpose. The light cast from the Statue was very poor and deemed too dim to be effective. Over time, it became clear that Liberty Island was too far inland to be a good position for a lighthouse in the first place.

3. Thomas Edison once had plans to make the statue talk 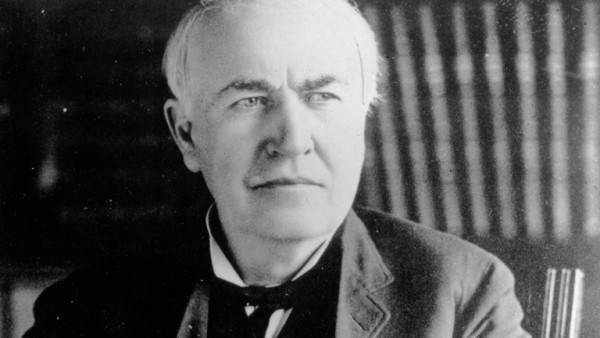 Thomas Edison proposed a colossal phonograph inside Liberty to make her “talk.” When Edison introduced the phonograph to the public in 1878, he told the newspapers that he had plans to install a primitive stereo system that would allow the statue to play speeches that could be heard up to the northern part of Manhattan and across the bay.

4. The Torch Was Switched 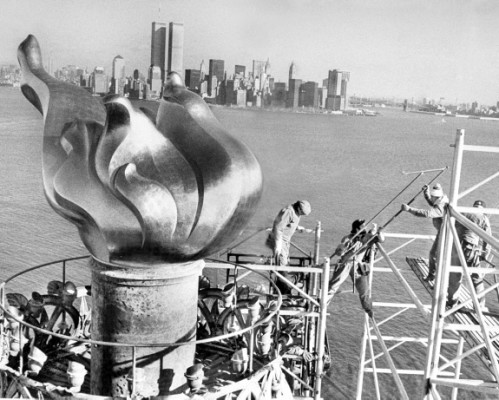 The original torch of the Statue of Liberty was changed between 1982 and 1986 when the statue underwent renovations. The original torch had been damaged by corrosion, caused by water and snow seeping in through windows installed during earlier restoration works in 1916. Parts of the copper on the statue’s flame were cut off, and new glass windows were installed. The new torch was made to look exactly like the old torch. It was constructed by French craftsmen who used an embossing method called repousse. It involves beating the underside of the copper with a hammer until it forms the desired shape. The repousse method is the same method sculptor Frederic Auguste Bartholdi used to construct the entire Statue of Liberty, including its torch. While other parts of the new torch were covered with copper, the flame was covered with gold leaf. The old torch can be found at the Statue of Liberty’s museum.

5. The Statue was originally designed for the Suez Canal in Egypt 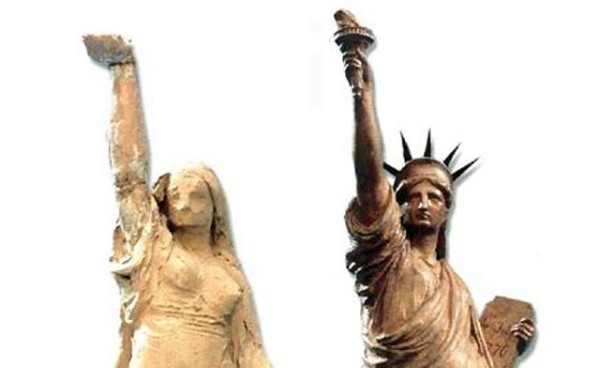 Bartholdi, the French sculptor who designed the statue, did not craft the basic design of Liberty specifically for America. As a young man, he fell in love with the Middle East. In 1867, at Paris world’s fair, Bartholdi met with the Khedive, the leader of Egypt, and proposed creating a work as wondrous as the pyramids. Two year later he returned to Egypt with the blueprint of giant statue of a woman that would double as a lighthouse at the entrance of the Suez Canal. The Egypt deal fell through, so Bartholdi arrived in the United States with his Statue of Liberty proposition in 1871 but it wasn’t until 1886 that the completed statue was officially unveiled in its current New York location.

6. Suffragettes protested the unveiling of the statue 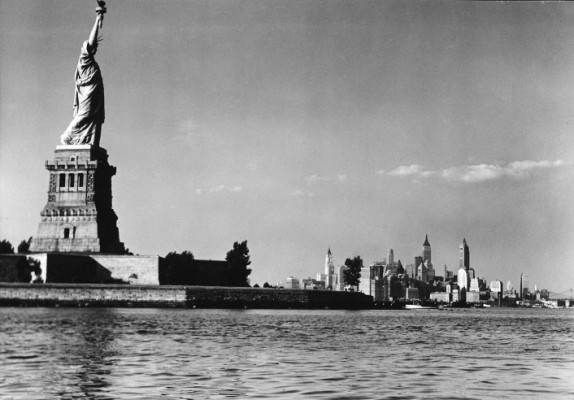 When it was unveiled in October 1886, women’s rights groups lamented that an enormous female figure would stand in New York harbor representing liberty, when most American women had no liberty to vote. Only two women attended the actual unveiling on what is now known as Liberty Island: Bartholdi’s wife, and the 13-year-old daughter of Ferdinand de Lesseps, the French engineer who had designed the Suez Canal. The wives of the American Committee members were forced to watch the proceedings from a navy vessel off the island. Suffragettes chartered a boat to circle the island during the unveiling. They blasted protest speeches, but those could not be heard over the din of steam whistles and cannon blasts in the harbor. 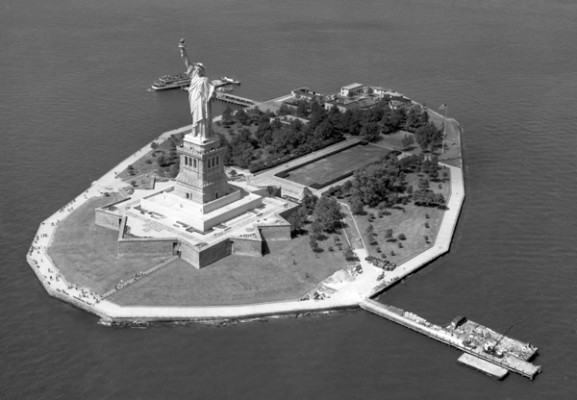 The star-shaped Fort Wood, which now serves as part of the statue’s pedestal, was home to military families from 1818 until the mid-1930s. These military families often included young children who remembered a Fourth of July where G.I.s bounced bottle rockets off of Lady Liberty’s posterior. A man named James Hill, recalled that he and his younger sister would drop baseballs from Liberty’s crown to see how high they would bounce. Other Liberty Island kids said they climbed to the torch tower and made it rock back and forth. 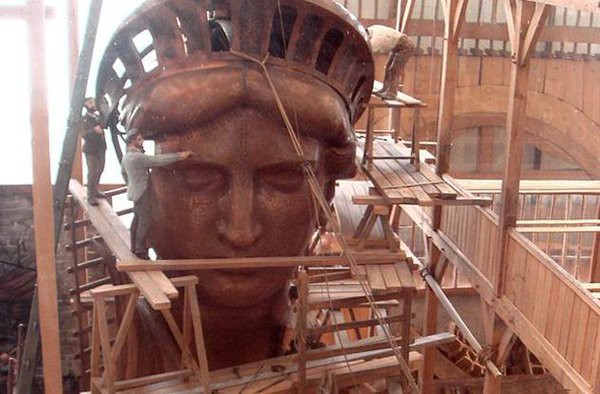 Constructed in Paris in the 1880′s, the statue was made with an exterior of untreated copper, which is the same as putting two pennies together, slowly turns green over time through oxidation. Oxidation of the statue’s copper caused a green patina, which completely covered it by 1906. Made of copper 3/32 inches thick, Lady Liberty originally had a far more shiny appearance.

9. Bartholdi planned the statue to be covered in gold 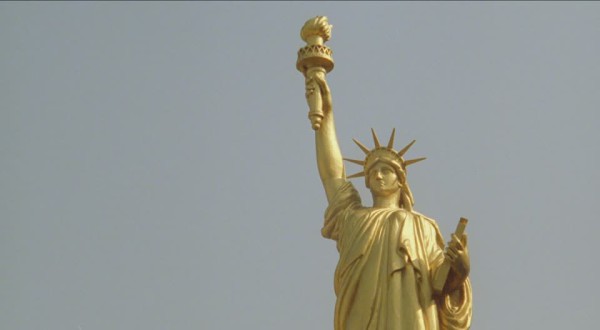 Bartholdi proposed that Americans raise the money to gild the statue, in order to make her visible after dark. However, given how hard and arduous a task it had been to gather even enough money to place the statue in New York harbor, no one followed through on paying the enormous cost of covering the massive statue in gold.

10. The statue was originally called: “Liberty Enlightening the World.” 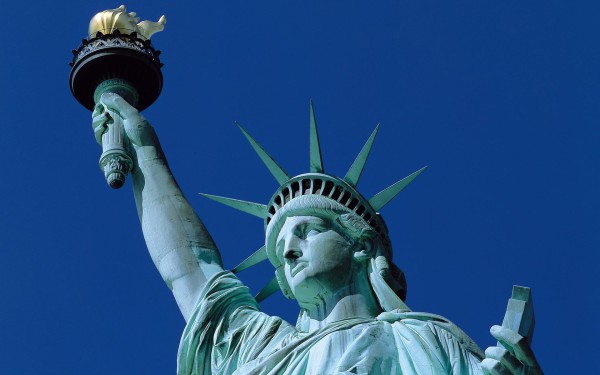 “The Statue of Liberty,” is, in fact, a nickname. In 1875, Bartholdi and his associates formed the Franco-American Union as the fundraising arm for the project, dubbed “Liberty Enlightening the World.”

« That Japanese super-tank of WWII, it would have had a crew of 11 & weighed 100 tons
Photos of female asylum patients by a Victorian psychiatrist who used photography to analyze mental disorders »