During WWII, these “Paradummies“ descended like real parachutists with a self-igniting explosive charge on their backs

Military deception refers to attempts to mislead enemy forces during warfare. This is usually achieved by creating or amplifying an artificial fog of war via psychological operations, information warfare, visual deception and other methods. As a form of strategic use of information (disinformation), it overlaps with psychological warfare. To the degree that any enemy that falls for the deception will lose confidence when it is revealed, he may hesitate when confronted with the truth. The Paradummy is a device first used in World War II that, used with other artificial paratrooper units, is meant to cause an invasion by air to exaggerate appearance, to appear larger than it actually is. Paradummies can also be used to lure enemy troops into staged ambushes. They were called “Rupert dolls” by British Troops and “Oscar” by American. When some of these dolls hit the ground, they explode and the pieces fly in every direction. Paratrooper dummy Rupert used during the D-day. From the Merville Bunker museum in France. source

One of the most unusual deception operations for D-Day involved hundreds of these dummy paratroopers, known as “Ruperts.” Early on D-Day morning they would be dropped with several real paratroopers east of the invasion zone, in Normandy and the Pas-de-Calais. The dummies were dressed in paratrooper uniforms, complete with boots and helmets. To create the illusion of a large airborne drop, the dummies were equipped with recordings of gunfire and exploding mortar rounds. These dummies led the Germans to believe that an additional airborne assault had occurred. The real troops would supply additional special effects, including flares, chemicals to simulate the smell of exploded shells, and amplified battle sounds. This operation, code-named “Titanic,” was designed to distract and confuse German forces while the main airborne forces landed further to the west. Douglas Culver explains to the students how a Rupert ParaDummy was used in Normandy. Source: Douglas Culver/Flickr

While enemies are distracted, real paratroopers will safely land at a strategic location or the Allies could secretly drop weapons. These parachutes were very popular among the population because in the wartime period textiles were scarce: the material was used to make clothing. The dummies were less popular and often ended up in a ditch. Not a totally unnecessary measure, because often the charges only partly ignited and might still go off. For that reason, Rupert dolls with their explosives were hardly preserved in their entirety. Components from the collections of the South Holland Resistance Museum and the Frisian Resistance Museum have made it possible to exhibit a Rupert doll in its entirety. 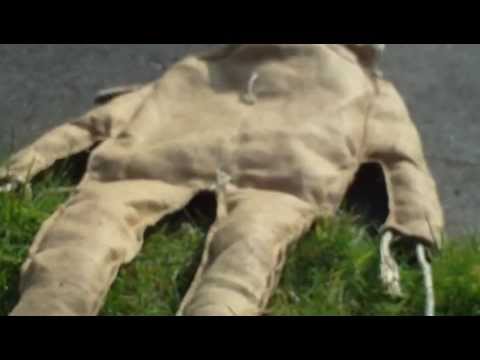 « 600 years-old & still ticking. The world’s oldest astronomical clock is in Prague
Had to eat dead passengers to survive: A survivor from 1972 plane crash releases new book about his ordeal »