When you’re in a cemetery, keep an eye out for coins on gravestones, deep meaning behind them

When people experience having their loved ones pass away, at some point there is an occasion to visit the cemetery to either pray or bring fresh flowers to the gravestone.  Sometimes people may notice something quite interesting on other gravestones while walking through a cemetery.

One particular cemetery worker found a random quarter on top of a headstone.  Instead of simply removing the money, he decided to do a little research as to how or why it came to be on top of the gravestone.

The cemetery worker, Dave Malenfant, works at National Cemetery in Holly, Michigan and he decided to share his research on social media. One of the major duties Malenfant has at the cemetery is the Cleaning of the Stones for fallen soldiers.  While doing that, he found a quarter on top of one of the soldiers’ headstones and did a little more research into it.  Malenfant then discovered a nickel placed on a different stone and realized there must be some kind of significance to these coins.

He had learned on social media that a coin that is left on the gravestone of a fallen soldier lets the family know that some kind, random stranger had come to that specific gravesite to pay their respects to the young man or woman who gave their life for their country. 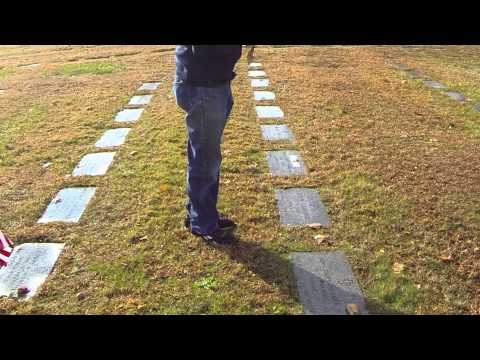 These small objects give so much significance and mean so much to the family.  Next time you’re in a cemetery, check to see if someone has paid respects to a fallen soldier.  You ought to pay yours, too.

These coins aren’t the only army tradition for the deceased.  United States Army funerals are some of the most elaborate and emotional funeral services held.  Here are some of the top traditions for those who have served our country:

This would depend on the location and the terms of the funeral, but there are often different traditions about transferring the body to the place of interment. The casket is always covered with the flag with the stars over the left shoulder. This is according to a patriotic tradition that started during the Napoleonic wars.

The fallen soldier will then be given full military honors.  For the funeral of a president, the casket is often carried by a horse-drawn caisson. The horses that are on the left will have riders as well as be the only ones with saddles.  This came from the days when the horses on the right were used for carrying ammunition.  The caisson is then followed by a horse with no rider, which symbolizes that the fallen will never ride again.

This is one of the better-known military traditions, however, many people do not know the story behind it.  This tradition was to honor the dead by showing their weapons were no longer in use. For the Navy, they were allowed to discharge seven rounds in commemoration, but the on-land men were able to shoot three times, totaling twenty-one.

The 21-gun salute was actually an honor guard team firing three volleys from rifles.  This tradition comes from traditional battle ceasefires so each side could clear their dead.  Three volleys shot means the dead were cleared.

This is also a well-known funeral tradition.  It was originally a bugle call composed by General Daniel Butterfield of the Union Army during the Civil War.  It was initially composed to signal “lights out.”  It eventually became the traditional way to honor those who had fallen and was played at every funeral.

At the end of every service, the flag is removed from the casket and folded in a particular way.  Each fold represents something different, leaving only the stars showing at the end.  Once the flag is folded properly, a few shells might be inserted in the back fold before it is presented to the next of kin in order to express their gratitude for the sacrifice that person made.