Mysterious Jimi Hendrix photo is explained by a dedicated fan 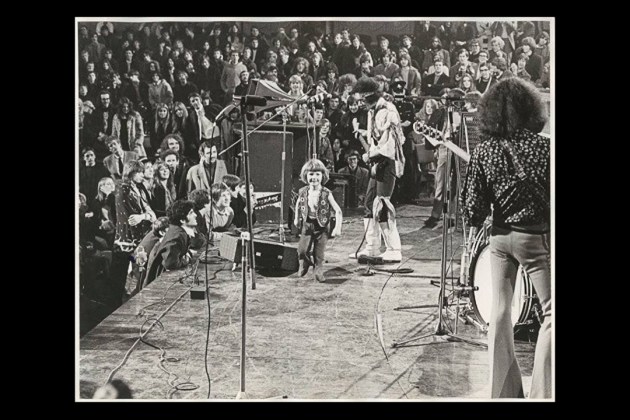 There is one particular photo that is going around the internet and is bringing up some questions. It is a photo of Jimi Hendrix and his band performing at a concert, with a little boy running across the stage.

It all started with a French music promoter and a Jimi Hendrix fanatic named Yazid Manou. Over the years, Manou had helped organize some of the biggest tributes and events dedicated to the legendary guitar player. For more than 20 years, Manou has worked with artists such as Taj Mahal, Steve Winwood, and Led Zeppelin. However, no one will ever compare to Hendrix, in his opinion.

Considering just how obsessed the man is with the famous singer, he has dedicated much of his time being somewhat of a detective. He has researched some rare performances and photos. In fact, he was the first one to reveal a telegram that Hendrix sent to Paul McCartney in October 1969.

In 1998, he gave B.B. King a copy of a song that King and Hendrix played together nearly 30 years earlier. Manou even presented Eric Clapton with photos he had never seen before – Clapton and Hendrix also recorded together.

One of Manou’s favorite Hendrix performances is the bootlegged Royal Albert Hall show from London. It was filmed on February 24, 1969. The show has never been released commercially, but it has always been a popular bootlegged video.

One of the most famous moments in the film happens near the end of the concert, right before Hendrix sings “Purple Haze.” A young boy only three or four years old emerges from the crowd and goes over to Hendrix. Hendrix bends down as the child whispers a message to him. The boy, seeing that he has finished his job, then walks off the stage.

Manou saw a photo from that moment which was posted on a private Jimi Hendrix Facebook group. He was intrigued and wanted to find out who that boy was, and was willing to face yet another challenge in the attempt. Manou ended up posting the photo across several Hendrix discussion boards and, several days later, he got his answer. 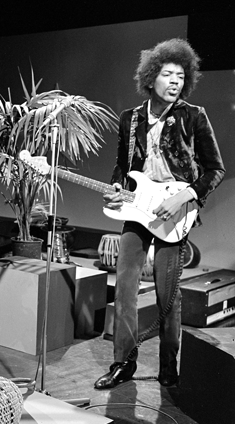 It wasn’t just some ordinary kid. The young boy was Charlie Weber, who was immortalized, along with his family, in the Robert Greenfield book called A Day in the Life: One Family, the Beautiful People, and the End of the Sixties. Weber’s parents, Tommy and Sue Weber, were one of the most fashionable couples of the 1960’s. Tommy was a race car driver who eventually went into the music business. Charlie and his brother Jake led a different life than other children their age. When their parents split up in the late 1960’s, the boys stayed with their father.

Once Manou figured out who the child was, he reached out to Weber. Weber is now in his 50’s and had never seen the photo before. Weber is living in Turkey and was amazed to see the photo; he said that he was not expecting that in his email from Manou. He added that it was amazing to see a part of his past. He remembered being backstage before the concert happened, but did not remember being on stage. He said his father introduced him to Hendrix.

Even at such a young age, Weber had a love for Hendrix. He said that Hendrix was his hero, which is why he was so excited to see him perform. He recalled that at that time, it wasn’t uncommon to see a child come onto the stage. He even remembered that he went on stage at the Isle of Wight with Julian and Brian Jones. Sadly, he didn’t remember what he said to Hendrix that day. However, Hendrix did not shy away from the kid; he was very kind to the young boy and gave him his full attention, even during his show.

Hendrix isn’t the only person Weber met while he was a kid. He said that George Harrison stayed at their house often. Then there were the Rolling Stones – sadly, the Weber’s young boys were used to smuggle drugs to Keith Richards during a few shows. Richards claimed the cocaine was going to be a wedding present for Mick Jagger when he married Bianca Perez-Mora Macias in 1971.

Weber was invited to the wedding and he said he remembered it quite fondly – it was one of the biggest weddings in rock and roll history. Weber and his brother served as pageboys. Sadly, Weber’s mother committed suicide shortly after that wedding, while the boys were still on the Rolling Stones tour.

Charlie began doing drugs in his early years but eventually settled down as a musician and filmmaker. His brother Jake is a film and TV actor, and his brother Tommy died in 2006. Weber described his time with the Rolling Stones as bittersweet. While in ways it was the time of his life, it was also one of the saddest since his mother had died.

Manou tracked down the man who took the photo that day. His name is Eric Hayes. Hayes is a Canadian who had made his way across Europe in the 1960’s, finding himself in the middle of a cultural movement. All the photos he had taken on his trip were lost when he returned to Canada in 1970. He recalled being at the Royal Albert Hall a week before the Hendrix concert. He had taken some photos of the backstage and talked to the band members.