The strange looking WWII fighter interceptor that you may not know of: XP-56 Black Bullet 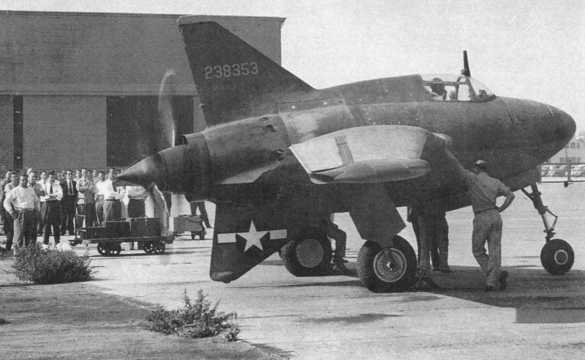 Ultimately, it was unsuccessful and did not enter series production. source

The XP-56 was essentially a hybrid flying wing to which was added a stubby fuselage to house the pilot and engine.

The Northrop XP-56 Black Bullet was a unique prototype fighter interceptor built by the Northrop Corporation. It was one of the most radical of the experimental aircraft built during World War II. Ultimately, it was unsuccessful and did not enter series production.

The initial idea for the XP-56 was quite radical for 1939. It was to have no horizontal tail, only a small vertical tail, used an experimental engine, and be produced using a novel metal. The aircraft was to be a wing with a small central fuselage added to house the engine and pilot. The hope was that this configuration would have less aerodynamic drag than a conventional airplane.

The idea for this single-seat aircraft originated in 1939 as the Northrop N2B model. It was designed around the Pratt & Whitney liquid-cooled X-1800 engine in a pusher configuration driving contra-rotating propellers. The U.S. Army ordered Northrop to begin design work on 22 June 1940, and after reviewing the design ordered a prototypeaircraft on 26 September 1940. Shortly after design work had begun, Pratt & Whitney, however, stopped development of the X-1800. The Pratt & Whitney R-2800 engine was substituted, although it was considered not entirely suitable. Although the new engine was more powerful (2,000 hp vs 1,800 hp) it had a larger diameter and required a larger fuselage to house it. This change delayed the program by five months.

The initial idea for the XP-56 was quite radical for 1939. It was to have no horizontal tail, only a small vertical tail, used an experimental engine, and be produced using a novel metal. The aircraft was to be a wing with a small central fuselage added to house the engine and pilot. source

It was expected that the new engine would require a 2,000 lb weight increase and cost 14 mph in top speed. Since this tailless design was novel and considered high risk, it was decided to construct a small, lightweight plane of similar configuration for testing called the Model N-1M. In parallel with the design of the XP-56, successful flight trials of the configuration were conducted utilizing this airframe, confirming the basic layout. Two small Lycoming engines powered this aircraft. These trials confirmed the stability of the radical design and, upon review, the Army decided to construct a second prototype, which was ordered on 13 February 1942. 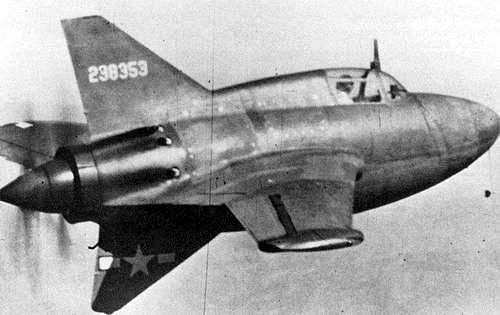 Taxi tests of the XP-56 began on 6 April 1943 and showed a serious yaw problem. At first, it was thought to be caused by uneven wheel brakes, and considerable effort was placed into fixing this problem. source

Northrop constructed the XP-56 using magnesium alloy for the airframe and skin, because aluminium was forecast to be in short supply due to wartime demands. At the time there was little experience with magnesium aircraft construction. Because magnesium cannot be easily welded using conventional techniques, Northrop hired Vladimir Pavlecka to develop the heliarc welding technique for magnesium alloy. (Later it was discovered that in the 1920s General Electric had already developed similar techniques. 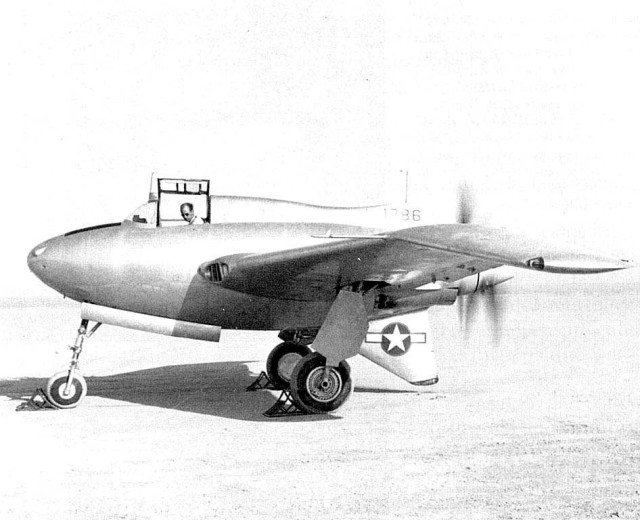 First engine runs in the aircraft were conducted in late March 1943, but excessive propeller shaft flex caused the engine to fail. Pratt & Whitney did not send another engine until August, causing a five-month delay.

Taxi tests of the XP-56 began on 6 April 1943 and showed a serious yaw problem. At first, it was thought to be caused by uneven wheel brakes, and considerable effort was placed into fixing this problem. Manual hydraulic brakes were installed and the aircraft flew on 30 September 1943 at Muroc Air Base in southern California. Eventually, the yaw problem was traced to a lack of aerodynamic stability, and to fix this the upper vertical stabilizer was enlarged from a mere stub, to one virtually matching the ventral unit in shape and area.

After a number of flights, the first XP-56 was destroyed 8 October 1943 when the tire on the left gear blew out during a high-speed (~130 mph) taxi across Muroc Dry Lake. The pilot, John Myers, survived with minor injuries which he credited to his innovative wearing of a polo player’s helmet. Myers was the test pilot for many of Northrop’s radical designs during the war. 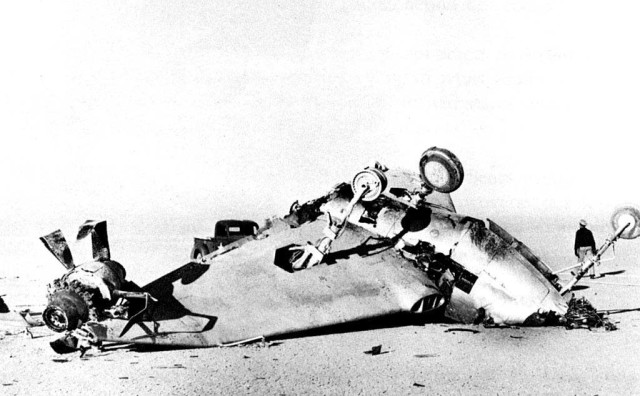 A number of changes were made to the second prototype, including re-ballasting to move the center-of-gravity forward, increasing the size of the upper vertical tail, and reworking the rudder control linkages. This second prototype was not completed until January 1944. The aircraft flew on 23 March 1944. The pilot had difficulty lifting the nose wheel below 160 mph .

Myers actually flew XP-56 Ship No. 1 twice on the type’s inaugural day of flight testing. The first flight was really just a hop in the air. Using caution as a guide, Myers flew only 5 feet off the deck in a 30 second flight that covered a distance on the order of 1 mile. The aircraft registered a top speed 130 mph. While the XP-56 exhibited a nose-down pitch tendency as well as lateral-directional sensitivities, Myers was able to complete the flight. source

He also reported extreme yaw sensitivity. This flight lasted less than eight minutes, but subsequent flights were longer, and the nose heaviness disappeared when the landing gear was retracted. Only relatively low speeds were attained, however. While urging NACA to investigate the inability to attain designed speeds, further flight tests were made. On the 10th flight, the pilot noted extreme tail heaviness, lack of power, and excessive fuel consumption. Flight testing was then ceased as too hazardous, and the project was abandoned after a year of inactivity. By 1946, the U.S. Army Air Forces was developing jet-powered fighters, and had no need for a new piston-powered fighter aircraft.

« The Find of a Lifetime – colorized images of the emptying of King Tuts tomb
Hitchcock’s leading lady, pride of Hollywood & Princess of Monaco- photos of the irreplaceable Grace Kelly »