One of the pieces that are displayed here is a magnificent example of a mix  between fashion and bicycle design from the late 19th century.

The Ladies Columbia Bicycle that is displayed in the newly opened wing of the Smithsonian was made in 1896 by the Pope Manufacturing Company at their Hartford, Connecticut factory. Back in those years, this was the biggest bicycle factory in the world.

This bicycle is not only special because of its looks, but also because of its innovative design. This model was called a “safety bicycle” and it had noticeable differences from its predecessor, the penny-farthing bicycle.

The pedals were placed closer to the ground which offered greater balance and easier braking, and the chain-drive enabled the manufacturer to use smaller wheels on it. In 1896, the old hard rubber wheels were replaced with inflatable pneumatic tires. The new bicycle was faster and more pleasant to drive than the old “boneshakers” with hard rubber wheels. 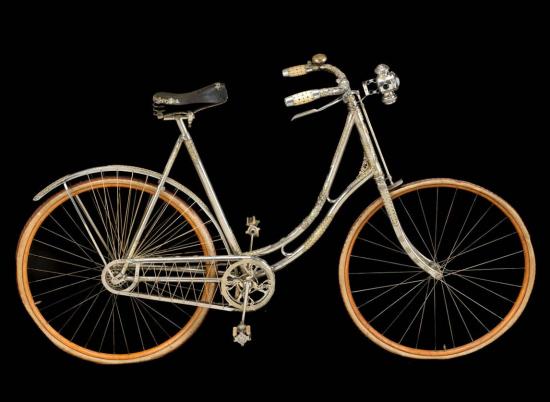 This particular bicycle actually became a celebrity after it came out of the factory at Hartford. This is what happened: Tiffany & Co obtained the bike and covered it completely with silver, gold, diamond and emeralds.

After it was finished, the customized bicycle was shown to the public in late 1895 as Tiffany’s highlight for the Christmas shopping season. The glamorous bicycle was never intended to be sold, it was, in fact, used as a marketing tool that would draw potential buyers to Tiffany local shops where they could find affordable models for purchasing.

The gem-covered bicycle had a price tag of 500$ before it was customized and you can imagine its price after all of the precious things were added. This gem among bicycles was not affordable to just anybody.

Tiffany did a great and detailed job on the bicycle. The nickel-plated steel frame was decorated with beautiful floral, sterling silver filigree designs covered with a thin layer of gold.

The handlebars have expensive ivory grips, banded with silver and covered with gold carvings. The lamp on the bike is made, again, of sterling silver with a fine rock crystal lens. The initials of the owner (MNW) were monogrammed on the front tube with gold letters covered with 12 diamonds and 8 small emeralds. A treasure chest on wheels! 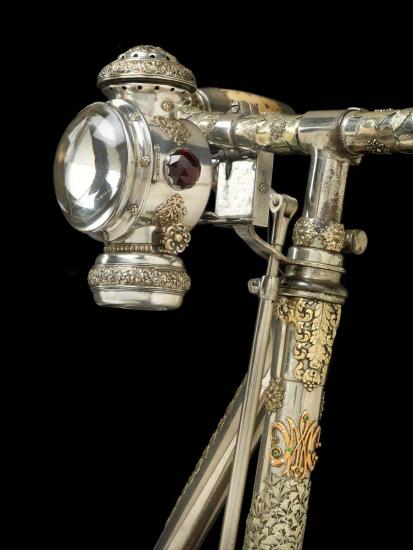 The front pipe of the bicycle. The bicycle lamp and Mary Wiley’s monogram covered with small diamonds and emeralds. /Source

Here is a little bit of background about the bicycle. It belonged to a certain Mary Noble Wiley of Montgomery, Alabama, wife of  Ariosto Appling Wiley, a Spanish-American War veteran, and a United States Representative from the state of Alabama.

Besides this, not much is known about the crafting and acquisition of the bicycle. in 1915, Mrs. Mary gave the bicycle to her son, Noble Wiley, to keep it for his daughter Hulit until she is old enough to ride it. The bicycle was packed away for 15 years until it saw the light of day again, years later. 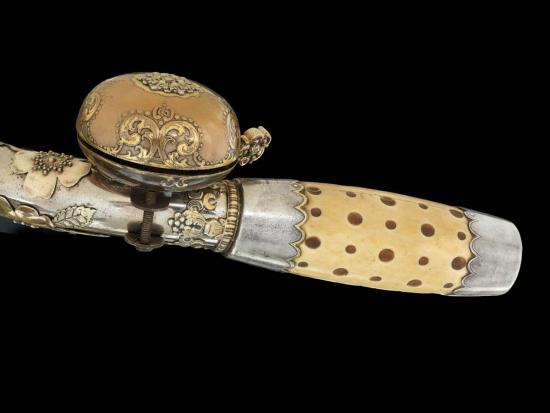 The ivory handle and bell of the bicycle. / Source

The bicycle seat before and after restoration. / Source

The bicycle was donated to the Smithsonian Institution in 1950. Last year, before it was displayed, the bicycle had undergone a thorough cleaning and restoration process by conservator Diana Galante. After many years of polishing, the silver on the bicycle began to tarnish and part of the tarnishing process was due to the sulfurous fumes from the decomposing natural rubber tires.

Every detail of the bike was meticulously cleaned and repaired and now it can be seen in its full glory, enclosed in a special box, at the Smithsonian’s National Museum of American History. It is currently on view in the “Patrick F. Taylor Foundation Object Project” section of the museum.

« The telescope from the Universal World Exposition in Paris, 1900 was the largest refracting telescope ever constructed.
Did a Queen once rule Egypt? A new find suggests Queen Hatshepsut may have »