Erm, yeah, the Ackermansion – a horror museum hidden away in a private home

Forrest J Ackerman amassed an extremely large and complete collection of science fiction, fantasy and horror film memorabilia, which, until 2002, he maintained in a remarkable 18-room home and museum known as the “Son of Ackermansion.” (The original Ackermansion where he lived from the early 1950’s until the mid-1970’s was at 915 S. Sherbourne Drive in Los Angeles; the site is now an apartment building.) This second house, in the Los Feliz district of Los Angeles, contained some 300,000 books and pieces of movie and science-fiction memorabilia. From 1951 to 2002, Ackerman entertained some 50,000 fans at open houses – including, on one such evening, a group of 186 fans and professionals, including astronaut Buzz Aldrin. Ackerman was a board member of the Seattle Science Fiction Museum and Hall of Fame, where many items of his collection are now displayed. Every square inch of his home is filled with Hollywood horror and sci-fi artifacts that he’s been collecting for 74 years. The collection included many models, miniatures, and other actual items used in old movies. The man generally credited with coining the phrase “sci-fi,” opened the home every Sunday to tours, showing off his downsized but still significant collection of sci-fi memorabilia for free. His willingness to share his collection made his Ackermansion “a mecca for local science fiction fans and a pilgrimage spot for visitors from around the globe.” During his career as a literary agent, Ackerman represented many famous names from the science fiction world, such as Ray Bradbury, Isaac Asimov, A.E. Van Vogt, Curt Siodmak and L. Ron Hubbard. He was, for over seven decades, one of science fiction’s staunchest spokesmen and promoters Through his magazine, Famous Monsters of Filmland (1958–1983), Ackerman introduced the history of the science fiction, fantasy, and horror film genres to a generation of young readers. At a time when most movie-related publications glorified the stars in front of the camera, “Uncle Forry”, as he was referred to by many of his fans, promoted the behind-the-scenes artists involved in the magic of movies. In this way, Ackerman provided inspiration to many who would later become successful artists, including Peter Jackson, Steven Spielberg, Tim Burton, Stephen King, George Lucas and countless other writers, directors, artists, and craftsmen. In 2002, when he encountered medical and legal problems, Ackerman began selling his treasures. He kept the choicest including Bela Lugosi’s Dracula cape and ring until he died in 2008 at age 92. Those two pieces sold for close to $90,000. He is interred at Forest Lawn Memorial Park (Glendale) with his wife. His plaque simply reads, “Sci-Fi Was My High.” 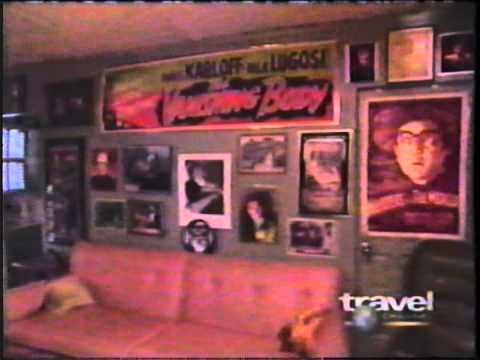 « US Navy tug that mysteriously went missing along with its 56 crew a 100 years-ago has been found
The telescope from the Universal World Exposition in Paris, 1900 was the largest refracting telescope ever constructed. »