On December 8th, 1941, the United States Congress declared war (Public Law 77-328, 55 STAT 795) on the Empire of Japan in response to that country’s surprise attack on Pearl Harbor the prior day. It was formulated an hour after the Infamy Speech of US President Franklin D. Roosevelt. Following the declaration, Japan’s allies, Germany, and Italy, declared war on the United States, bringing the United States fully into World War II. 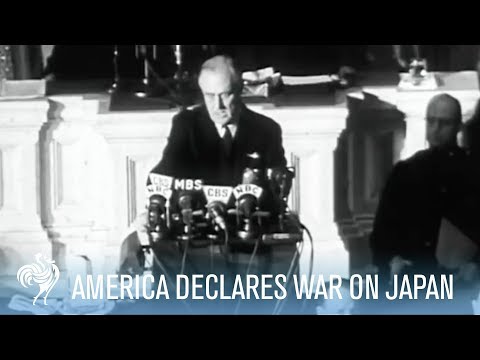 The attack on Pearl Harbor took place before a declaration of war by Japan, but that was not the intent of the Japanese leadership. It was originally stipulated that the attack should not commence until thirty minutes after Japan had informed the United States that it was withdrawing from further peace negotiations. It was the intent of the Japanese to uphold the conventions of war while still achieving surprise, but the attack began before the notice could be delivered. Tokyo transmitted the 5,000-word notification (known as the “14-Part Message”) in two blocks to the Japanese Embassy in Washington. However, transcription took too long for the ambassador to deliver it in time. Even so, the notification was worded so that it actually neither declared war nor severed diplomatic relations.

President Roosevelt formally requested the declaration in his Infamy Speech, addressed to a joint session of Congress and the nation at 12:30 p.m. on December 8. The declaration was quickly brought to a vote; it passed the Senate, and then passed the House at 1:10 p.m. The vote was 82 – 0 in the Senate and 388 – 1 in the House. (Jeannette Rankin, a pacifist and the first woman elected to Congress, cast the only vote against the declaration; hisses could be heard in the gallery as Rankin cast the vote; several colleagues asked her to change it to make the resolution unanimous—or at very least, to abstain—but she refused. “As a woman, I can’t go to war,” she said, “and I refuse to send anyone else.” After the vote, an angry mob followed her as she left the Capitol building, and she was forced to take refuge in a telephone booth until United States Capitol Police could rescue her. Two days later a similar war declaration against Germany and Italy came to vote; Rankin abstained. Nine other women voted in favor of the declaration of war.)