The Elektromote, the world’s first trolleybus, took to the streets of Berlin in 1882

The Electromote was the world’s first vehicle run like a trolleybus, which was first presented to the public on April 29, 1882, by its inventor Dr. Ernst Werner von Siemens in Halensee, a suburb of Berlin, Germany. It was a time when seeing anything big move without help from a horse was amazing and unprecedented. 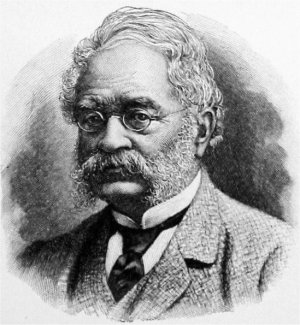 The world’s first trolleybus operated from April 29 to June 13, 1882, on a 540 m (591 yard) trail-track starting at Halensee railway station, and thence to “Straße No. 5”, today’s Joachim-Friedrich-Straße, and “Straße No. 13”, today’s Johann-Georg-Straße, crossing the upper Kurfürstendamm at former Kurfürstenplatz. 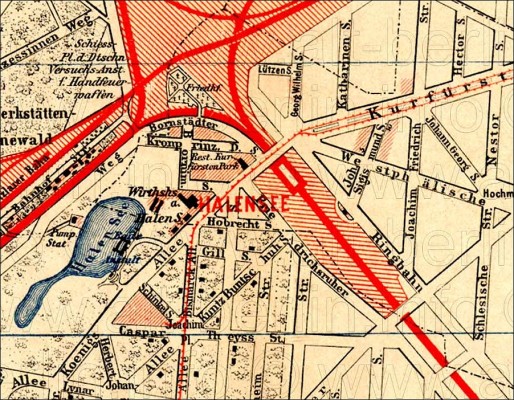 The idea of using electricity to power transit was attempted earlier with the Gross-Lichterfelde Tramway, which provided power to the car, not from overhead wires, but through the rails. This proved to be shocking for anyone who stepped on the track. The early electric tramlines were electrified by direct current using a third rail. However, this system proved unworkable – using of third rail led to the electric short circuits during rains, direct voltage killed many animals (dogs and cats) and was dangerous for pedestrians. The supply with direct current via the two parallel rails has the same drawbacks. In addition, it needs to isolate wheel pairs with using of this system to avoid short circuit through the axis.

On August 25, 1883, experimental/demonstration 350-meters line was put into operation in the Prater park, Vienna, Austria. This was powered by 150 V but was also removed later. In October 1883, the first permanent tram service with overhead lines was started on Mödling and Hinterbrühl Tram in Austria. These trams had bipolar overhead lines, consisting of two U-pipes, in which the pantographs hung and ran like shuttles.

In 1881, the first tram with overhead lines was presented by Werner von Siemens on the International Electric Exposition in Paris. This experimental/demonstration line for an exposition was built between Place de la Concorde and Palais del’Industrie, but the installation was removed after that event. One year later, from April to June 1882, Siemens had tested a similar system on his Electromote in Berlin. 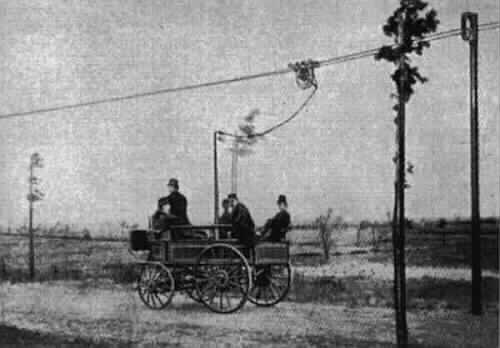 The Elektromote, the world’s first trolleybus, in Berlin, Germany, 1882

The Electromote was a converted four-wheel landau carriage, equipped with two 2.2 kW electric motors transmitting the power using a chain drive to the rear wheels. The voltage used was 550 V DC. The electric power transmission to the coach was by a flexible cable pulling a small eight-wheeled “contact car” (Kontaktwagen) that ran along the overhead power lines. In English language use, the Kontaktwagen was later named the “trolley”, giving the trolley car and trolley bus their names.

This experimental vehicle already fulfilled all the technical criteria of a typical trolleybus. After the demonstration runs closed on June 13, the test track was dismantled on June 20, 1882. Siemens wanted to build a network of electric elevated lines in Berlin. But the skeptical town council did not allow him to do this until 1902, when the first elevated line opened. 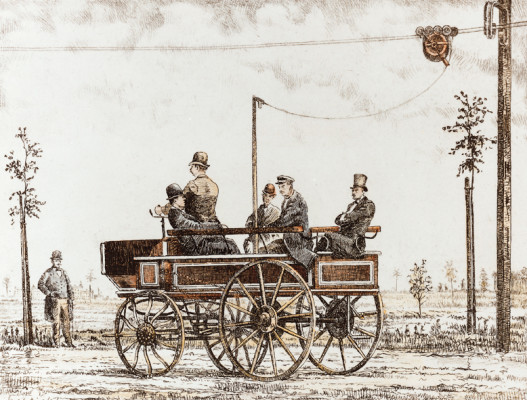 Today’s ancestor of the Elektromote is the trolleybus, a contraption you’ll see all over Europe and in some North American cities like San Francisco, Seattle and Vancouver. They roll like a normal bus but get their power like an electric rail car. Rubber-tired buses that run on power from overhead wires have some distinct advantages when it comes to climbing hills. They’re also clean and quiet.