Hero pilot of Vietnam: desperate father throwing his wife & children 18 feet onto a US ship – then jumped from the ditched helicopter

The pilot, tailed U.S. choppers to make it to the USS Kirk, where he threw his family to safety because his Chinook was too large to land on the deck

New footage has been recently released to the public showing how a young Vietnamese family survived a helicopter crash. It is an incredible story how the Vietnamese pilot went through hell and back to save his wife and children, and eventually himself.

During the Fall of Saigon, this man realized that his helicopter was about to crash, so he threw his children and wife onto a fleeing U.S. warship. After ensuring that his family was safe, he jumped from the helicopter and onto the ship, right before the aircraft sunk into the waters. It was risky thing for the man to do, however he was not worried about what kind of ship it was; he only cared about keeping him and his family alive.

The man and his family were not the only ones who had piled in during the United States’ evacuation in April 1975. There were several other pilots who did the same thing, saving themselves from the crash of their helicopters. 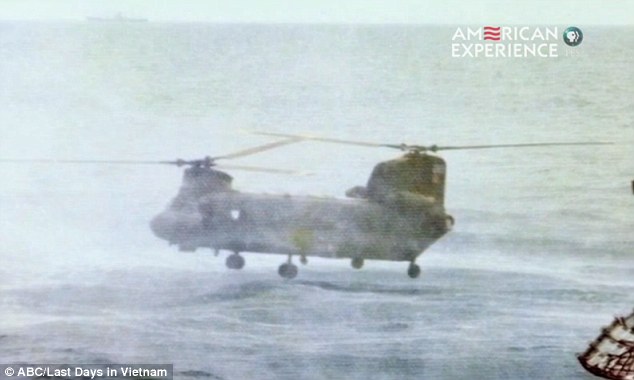 After saving his family, the pilot set the helicopter down onto the sea

The Americans allowed Vietnamese families onto the retreating ships, saving dozens. The U.S. servicemen flew hundreds of Americans and Vietnamese between the embassy in Saigon to the ships waiting on the coast of Vietnam. But some of the South Vietnamese ended up taking matters into their own hands.

While the South Vietnamese managed to land their helicopters on the ship successfully, one man proved to be unlucky. He was flying a larger Chinook that couldn’t land on the ship because of its size. However, this did not stop him from getting on that ship. He hovered about 18 feet above the ship and threw his children out of the door. At the time, the children were two, five, and eight-months old. He relied on the U.S. servicemen to catch his children. After they were safely onboard, he threw his wife to safety next.

He hovered an estimated 18ft above the deck, and hurled his children – aged two, five and eight months – out of the plane into the arms of U.S. servicemen, followed by his wife

Since the process took a long time, he was running out of fuel fast. After his wife reached the deck safely, he pulled off his pilot suit and hovered as close to the water as he could and prepared to leap out of it before it crashed. He ended up tilting the right-hand side of the helicopter into the sea and leaping out of the left-hand side. The helicopter exploded when it hit the water and less than a minute later the pilot’s head emerged out of the water, close to where the helicopter had sunk. He was then taken on board the ship. 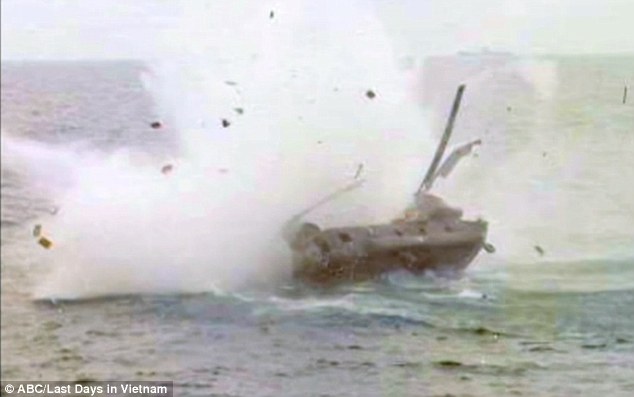 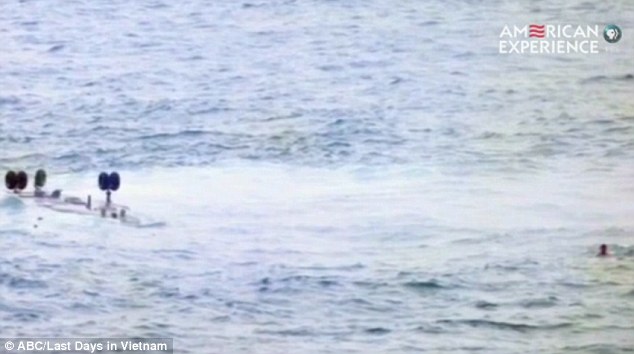 To the right of the picture -you can see the pilot swimming away from the wreck.

Operation Frequent Wind had began with fixed-wing aircraft until the U.S. runways were shelled and became unusable. After all was said and done, the U.S. servicemen helped 50,000 escape South Vietnam. The helicopter rescues were actually the largest evacuations in history. Most of the Vietnamese who escaped the Fall of Saigon were granted permission to move to the United States.

Follow the link to view the photos and video from the evacuations. They are truly amazing and show just how many people escaped with the help of South Vietnamese pilots and Americans.

« The 1,650-year-old Speyer wine is the oldest bottle of wine in the world?
The poignant story of the Radium Girls – how their deadly tragedy was used to change the world »