Since the fifth century A.D., different warring cultures have made body armor. This includes the Ancient Greeks, Persians, Chinese and Norse using everything from sheet metal to terracotta, bone and plant fibers. But, the first soft ballistic vest was produced by a tailor in Dublin, Ireland in the 1840s. The Cork Examiner reported on his line of business in December 1847:

The daily melancholy announcements of assassination that are now disgracing the country, and the murderers permitted to walk quietly away and defy the law, have induced me to get constructed a garment, shot and ball proof, so that every man can be protected, and enabled to return the fire of the assassin, and thus soon put a stop to the cowardly conduct which has deprived society of so many excellent and valuable lives, spreading terror and desolation through the country. I hope in a few days to have a specimen garment on view at my warerooms.

In 1901, the Polish inventor Jan Szczepanik created the first ballistic vest using silk. The vest saved the life of Alfonso XIII of Spain when he was shot by an attacker. 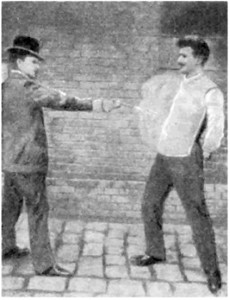 Test of a 1901 vest designed by Jan Szczepanik, in which a 7 mm revolver is fired at a person wearing the vest source

However, the vests must first be tested and back then there were men who went out wearing bullet-proof vests and took turns shooting each other, just to make sure they worked.

After President William McKinley was assassinated in 1901, the US military explored the use of soft body armor. The silk-derived garments were shown to be effective against low-velocity bullets, but not the new generation of handgun ammunition. The US military decided against silk armor because of this, combined with the high price of silk.

The United States developed several types of body armor, including the chrome nickel steel Brewster Body Shield, which consisted of a breastplate and a headpiece and could withstand Lewis Gun bullets at 2,700 ft/s (820 m/s), but was clumsy and heavy at 40 lb (18 kg). A scaled waistcoat of overlapping steel scales fixed to a leather lining was also designed; this armor weighed 11 lb (5.0 kg), fit close to the body, and was considered more comfortable.

By 1923, the Protective Garment Corporation of New York manufactured a light weight vest for police use and they held a live demonstration in DC. 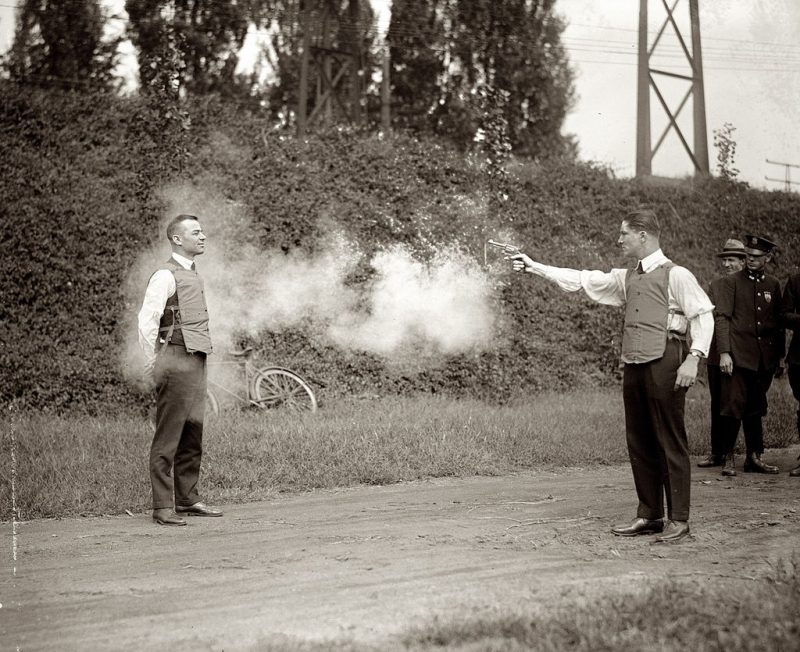 The gun players are WH Murphy and his assistant, of the Protective Garment Corporation of New York. The pictures were taken during a demonstration of the company’s “bulletproof vest” for DC-area police in 1923. The live demonstration took place at the Washington city police headquarters. They are inventors and salesmen trying to convince the police force that these bulletproof vests work and save lives.

The bulletproof vest became an interesting possibility for law enforcement agencies during the 1920s and 30s as the Great Depression saw armed crime levels spike and ‘gangsters’ rise to prominence many of whom were armed with shotguns, large calibre pistols, Thompson sub-machine guns and automatic rifles like the BAR.  Police forces faced with criminals armed with this formidable arsenal were caught on the back foot and looked to vests as a viable method of protecting officers and agents.

« Imago Mundi is the name of the Babylonian map which is the oldest in the world …
Recovered from doomed British explorer ship HMS Erebus, Bronze bell became trapped in Arctic ice 170 years ago … »