The Lee Plaza, also known as the Lee Plaza Hotel or Lee Plaza Apartments is a vacant 15-story high-rise apartment building located on West Grand Boulevard about a mile west of the Fisher Building and new Third & Grand development. It is a registered historic site by the state of Michigan and was added to the United States National Register of Historic Places on November 5, 1981. Designed by Charles Noble and constructed in 1929, it rises to 15 floors and is an excellent example of Art Deco architecture of the 1920s. The Lee Plaza is perched on the northwest corner over downtown Detroit, next to New Center. source The hotel has been vacant since 1993. Source: Mike Boening Photography/Flickr

In an attempt to retain functionality it was converted to an assisted living facility for senior citizens but was seized by the city of Detroit for unpaid property taxes. First built as an ornate high-rise hotel along West Grand Boulevard, Lee Plaza was an upscale apartment with hotel services. Decorated with sculpture and tile outside, the structure rivaled the Book-Cadillac and Statler Hotels for architectural notice in Detroit during the 1920s. After economic contraction, the apartment’s ownership changed several times, being used as a senior citizens’ complex before finally closing as a residence in the early 1990s. It opened in 1927 as a luxury residential hotel. Source: Josh Walker/Flickr In its heyday, the luxury building operated as a kind of hotel-apartment combo, offering luxurious amenities. Source: Mike Boening Photography/Flickr Through the years its owners have gone bankrupt and the building itself transitioned into low-income senior citizen housing before going vacant. Source: Mike Boening Photography/Flickr

A developer is aiming to restore Detroit’s vacant and ravaged Lee Plaza high-rise into 200 luxury apartments in a part of the city that hasn’t seen such investment in decades. On November 19, 2015, developer Craig Sasser, announced that he will purchase Lee Plaza for $258,000 from the Detroit Housing Commission, and announced redevelopment of Lee Plaza and the surrounding area, starting in January 2016, with completion in late 2017. The building renovation will cost around $34 million, with another $50 million earmarked for adjacent lots. In total, approximately $200 million is expected to be spent redeveloping the hotel and surrounding area. The interior was fitted with 220 one- to four-room apartments. Source: Rick Harris/Flickr It was almost unidentifiable as a hotel. Source: Rick Harris/Flickr It was added to the National Register of Historic Places on November 5, 1981. Source: Rick Harris/Flickr

The redevelopment will include 200 units of luxury, market-rate apartments, and the redevelopment of two adjacent lots, as well as several nearby new construction projects, including single-family houses, apartment buildings, low-income housing and some commercial properties. Market-rate is hovering right around $1.75 to $2 per square foot, currently. The building renovation will cost around $34 million, with another $50 million earmarked for the adjacent lots. In total, approximately $200 million is expected to be spent redeveloping Lee Plaza and the surrounding area. 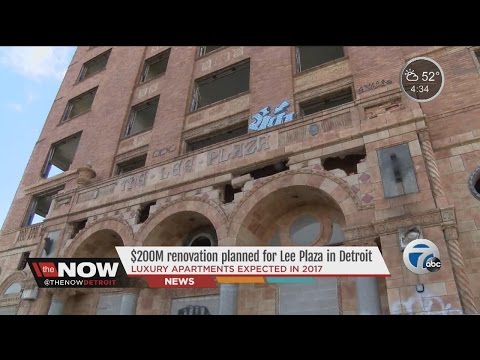 « Abandoned in the rainforest: Henry Ford’s Fordlandia was to be inhabited by 10,000 people to secure a source of cultivated rubber for his cars
Did you know that a Mosque stood inside the Greek Parthenon for 200 Years? – We sure didn’t! »