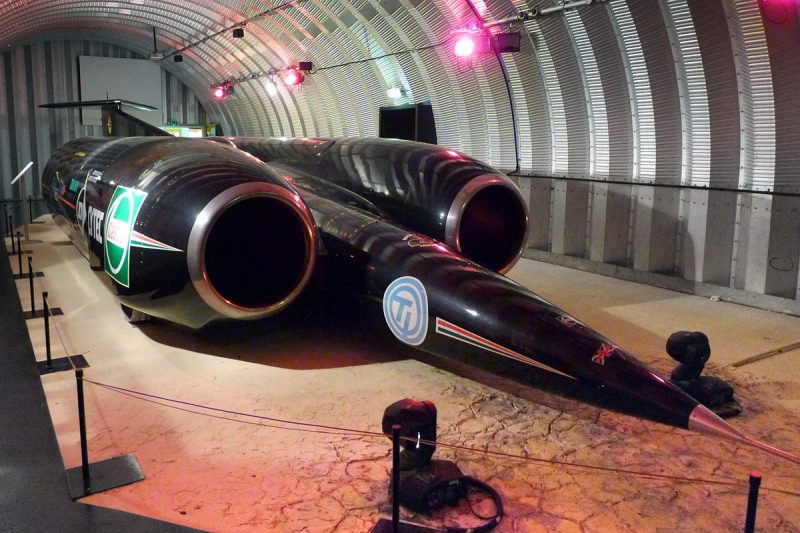 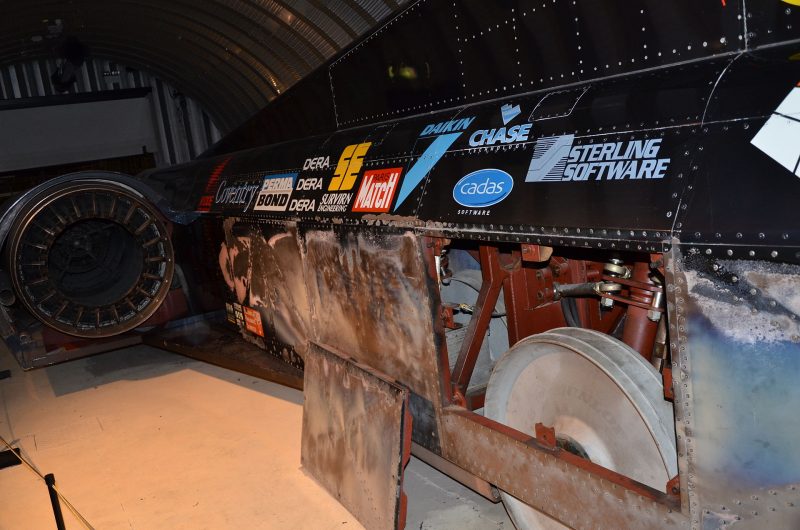 The rear wheel assembly of the ThrustSSC. source 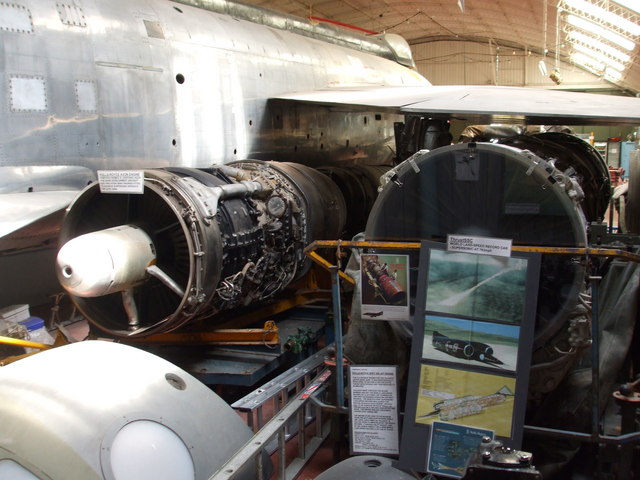 One of the engines in the Norfolk and Suffolk Aviation Museum. source 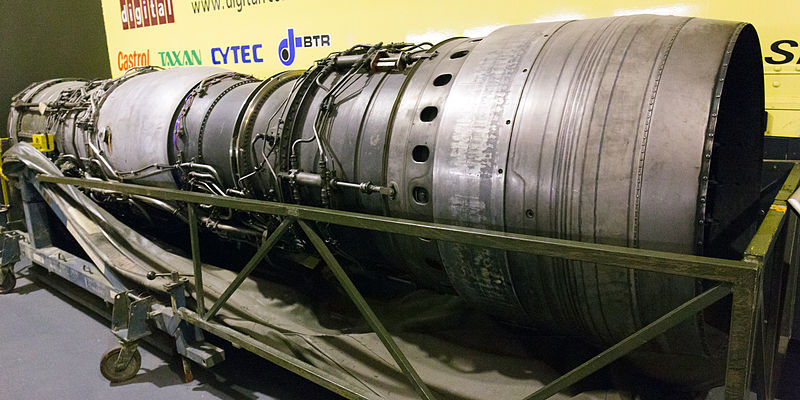 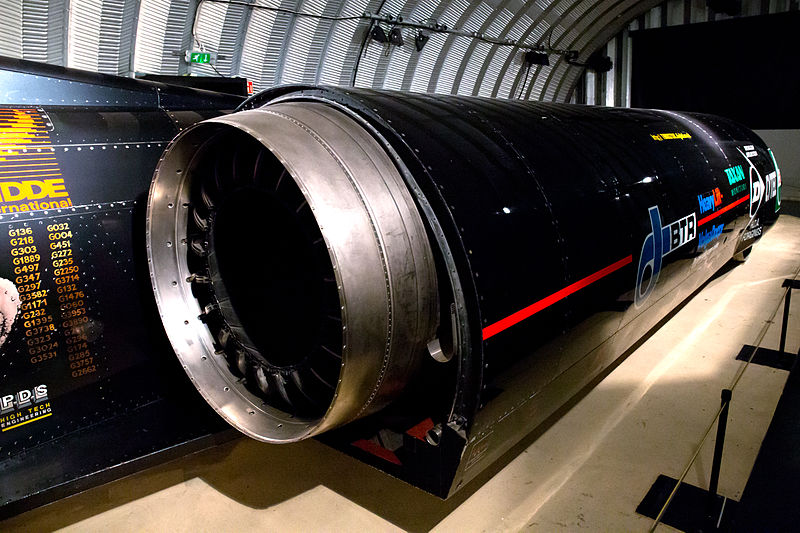 The record run in October 1997 was preceded by extensive test runs of the vehicle in autumn 1996 and spring 1997, in the Al-Jafr desert (located in Ma’an Governorate) in Jordan, a location unknown before for its capabilities as a test range for high-speed land vehicles, with numerous advantages compared to the salt deserts of the Western United States. 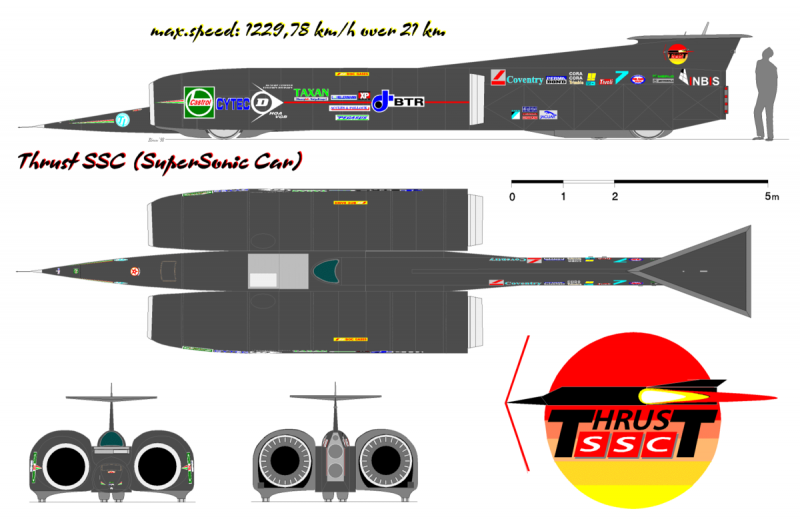 After the record was set, the World Motor Sport Council released the following message:

The World Motor Sport Council homologated the new world land speed records set by the team ThrustSSC of Richard Noble, driver Andy Green, on 15 October 1997 at Black Rock Desert, Nevada (USA). This is the first time in history that a land vehicle has exceeded the speed of sound. The new records are as follows:

In setting the record, the sound barrier was broken in both the north and south runs. 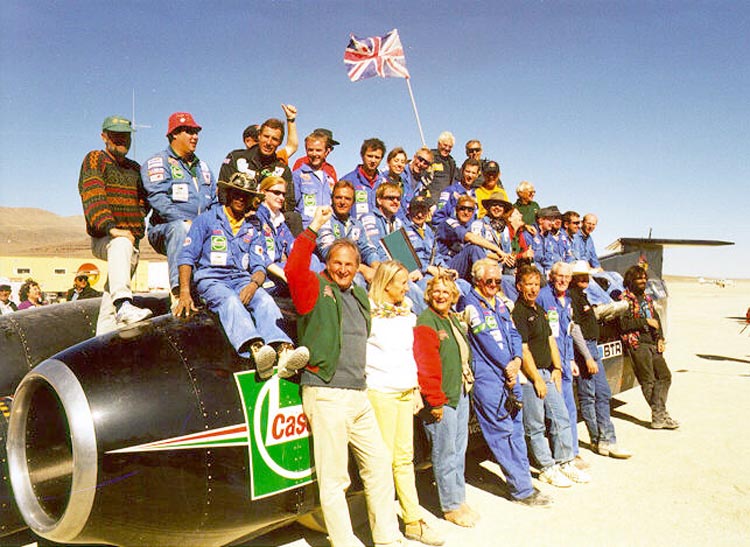 The team with ThrustSSC. source

In 1983, Richard Noble had broken the world land speed record with his earlier car Thrust2, which reached a speed of 1,018 km/h (633 mph). The date of Andy Green’s record came exactly a half century and one day after Chuck Yeager broke the sound barrier in Earth’s atmosphere, with the Bell X-1 research rocket plane on 14 October 1947. 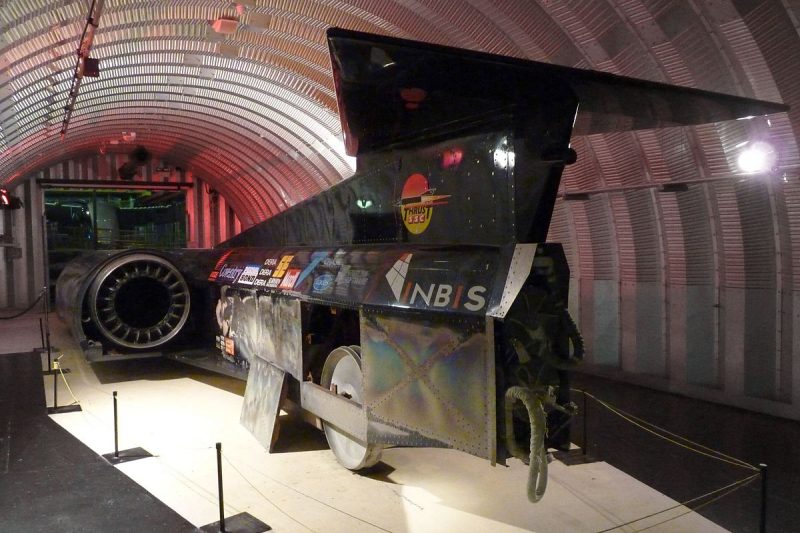 Rear view of ThrustSSC, with a panel removed to show one of the aluminium alloy wheels, at Coventry Transport Museum. source

Both ThrustSSC and Thrust2 are displayed at the Coventry Transport Museum in Coventry, England. Thrust SSC is housed in a barrel-roofed hall. Visitors can board the pit trailer from which ThrustSSC runs were controlled, and can ride a motion simulator depicting a computer-generated animation of the record-breaking run from the perspective of Green.

Several teams are competing to break the record, including Richard Noble’s Bloodhound SSC project and the North American Eagle project. 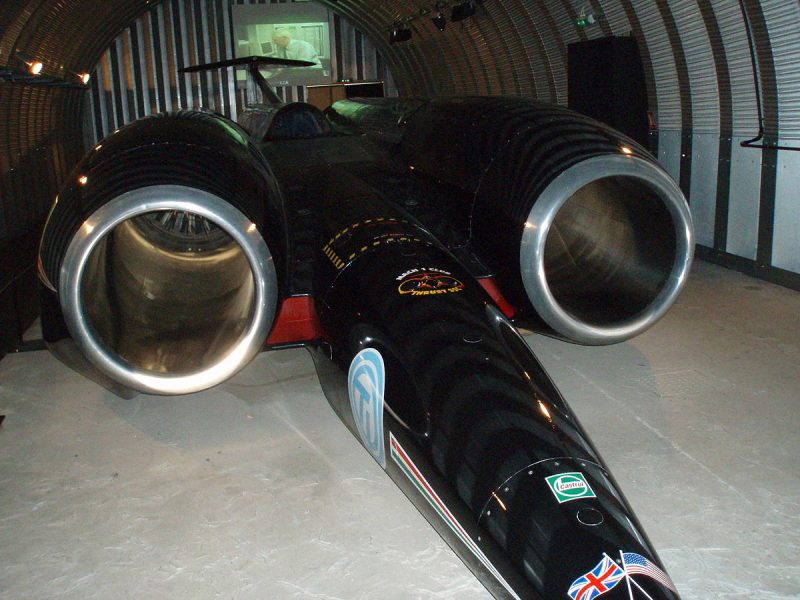 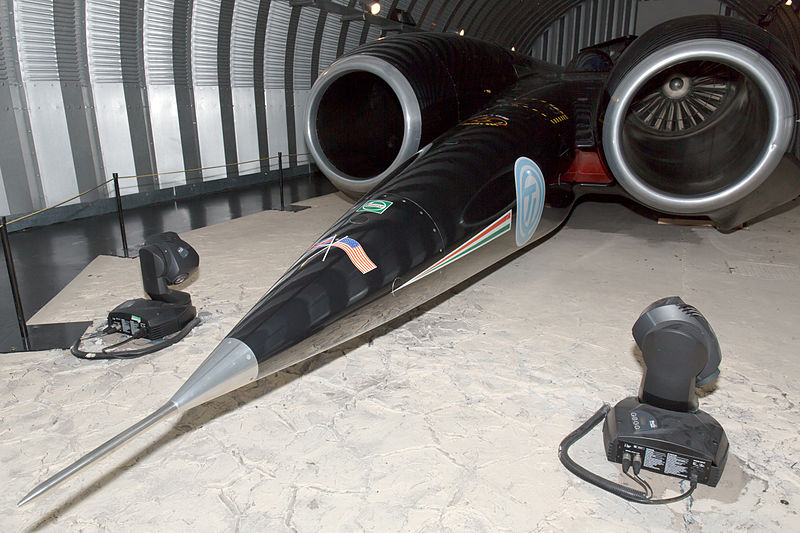 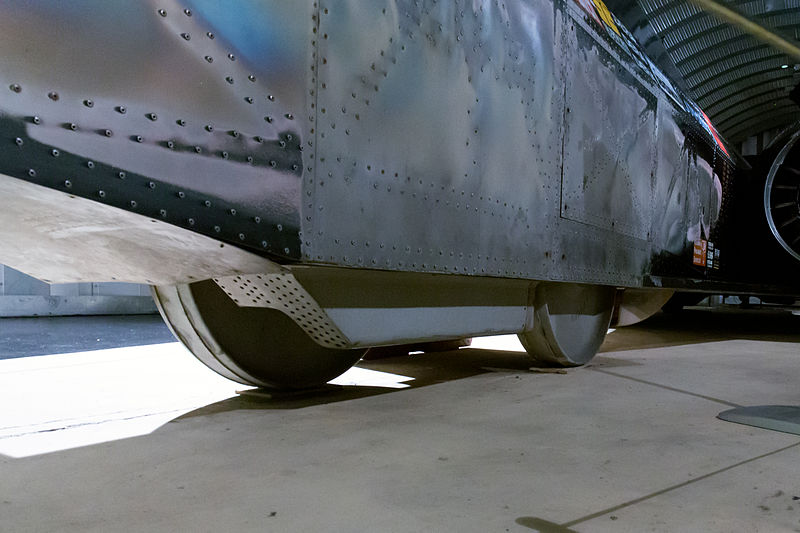 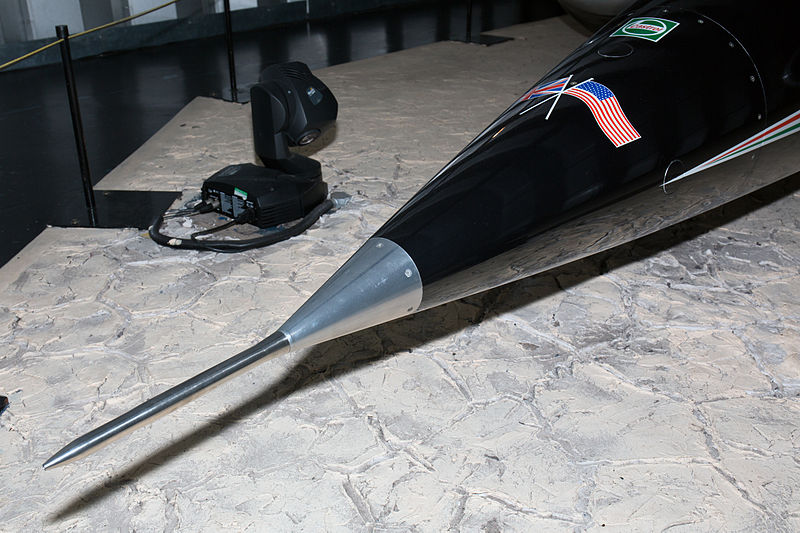 In June 2012, a television advertisement for the Orange San Diego mobile phone, containing an Intel processor, was broadcast on British television and featured a fast car in computer generated imagery. Richard Noble claimed that the car was a representation of Thrust SSC and that these companies had used his intellectual property without permission, putting the future of the Bloodhound SSC project in doubt. The Advertising Standards Authority rejected the Bloodhound team’s complaint, claiming that intellectual property disputes were not in its remit. 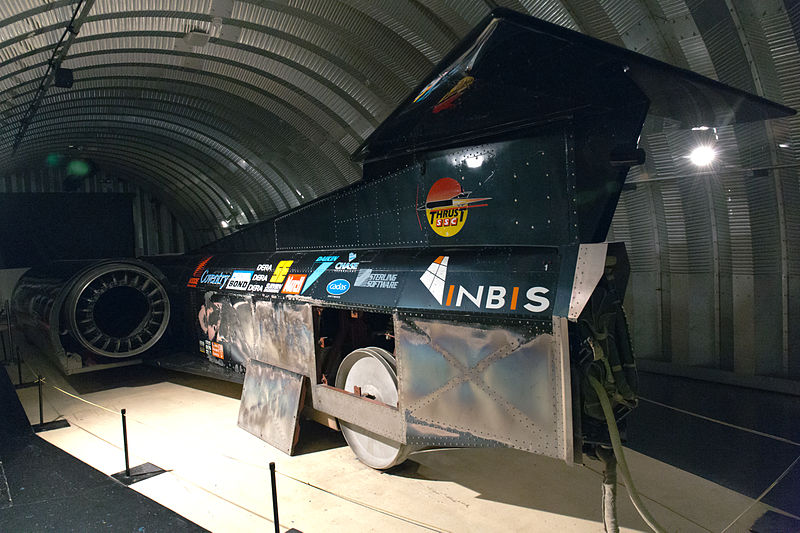 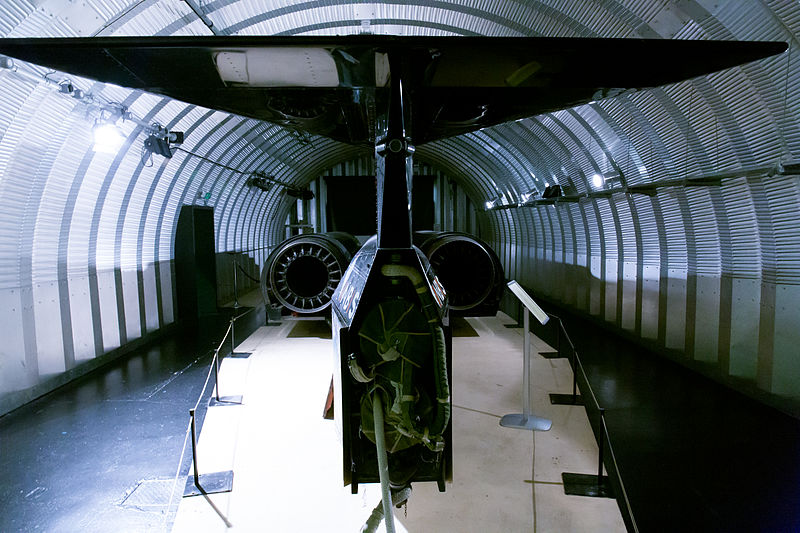 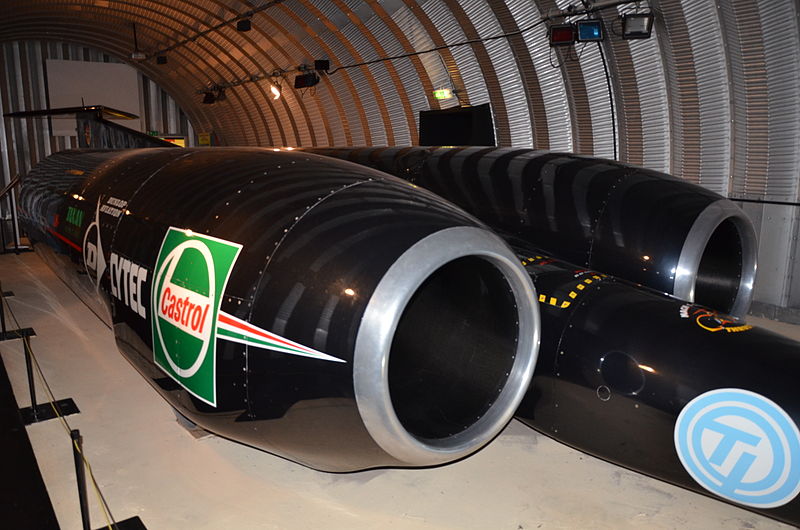 According to BBC News technology correspondent Rory Cellan-Jones, Intel and Orange responded that their production team had researched different styles of “superfast vehicles” and developed their own Orange-branded land speed car, and that the advertisement and phone were not connected to Noble or Bloodhound SSC. 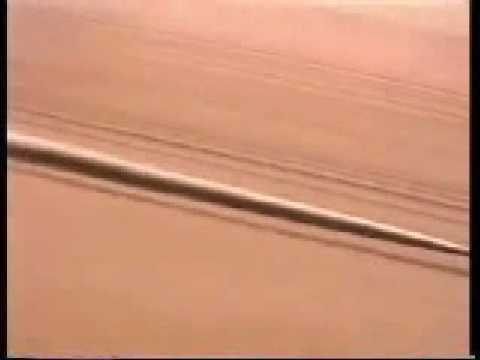