Stunning images of shipwrecks taken by one family over 130 years … …

It is an interesting thing to think about – four generations of one family, the Gibson family, were there to photograph several ships right at the moment of their destruction.  The eerie, fuzzy black and white photos of the ships moments away from death were all captured by the Gibson family and are now going up for auction, where it’s hoped the collection brings in thousands of dollars.

The first photo was taken over 150 years ago when John Gibson had bought his first camera.  Each and every photo that was taken with that same camera have been put into a collection and will be sold for what auctioneers hope to be between 100,000 and 150,000 pounds. 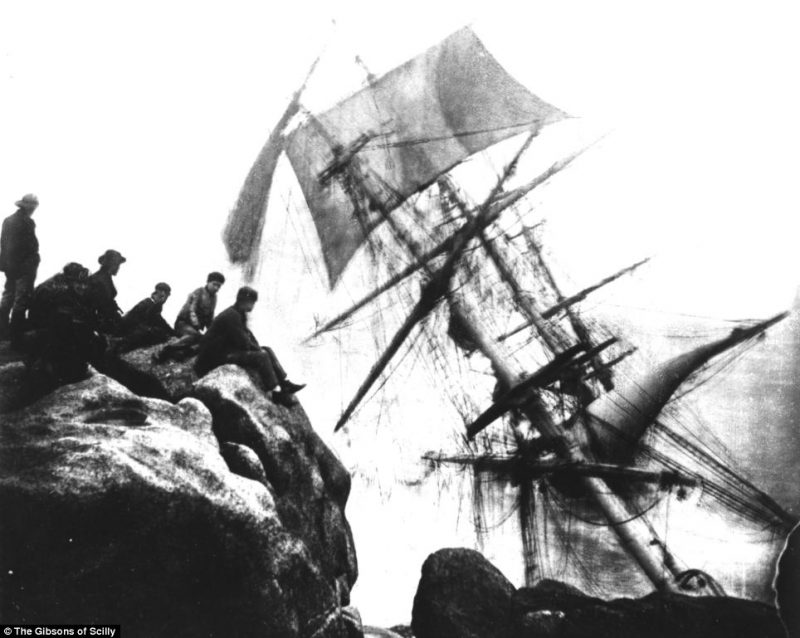 The Minnehaha was shipwrecked in 1874 as it travelled from Peru to Dublin, it was carrying guano to be used as fertiliser and struck Peninnis Head rocks when the captain lost his way. The ship sank so quickly that some men were drowned in their berths, ten died in total including the captain. 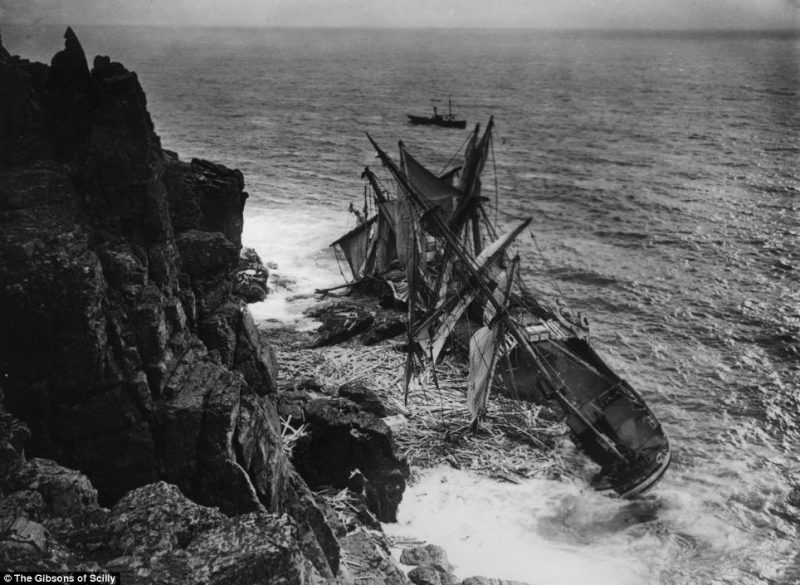 The Norwegian sailing ship the Hansy,was wrecked in November 1911 on the eastern side of the Lizard in Cornwall. Three men were rescued by lifeboat and all of the rest of the passengers managed to escape up onto the rocks.

A majority of those photos were of events that had tragic endings.  Many of the ships would be smashed up against the rocks on the coast of Cornwall.  Many lost cargo and the men who were on them.  It is amazing that the Gibson family members stood there and watched while men lost control of their ships and sometimes went down with the ship. All images rmg.co.uk

Spanning a period of 130 years, every generation of Gibsons provided a family member to be a photographer.  In their collection there were nearly 1,000 negatives that captured almost 200 shipwrecks.  This particular area around Cornwall and the Isles of Scilly were known to be treacherous and dangerous.  However, that did not stop those ships from attempting to sail near that area. 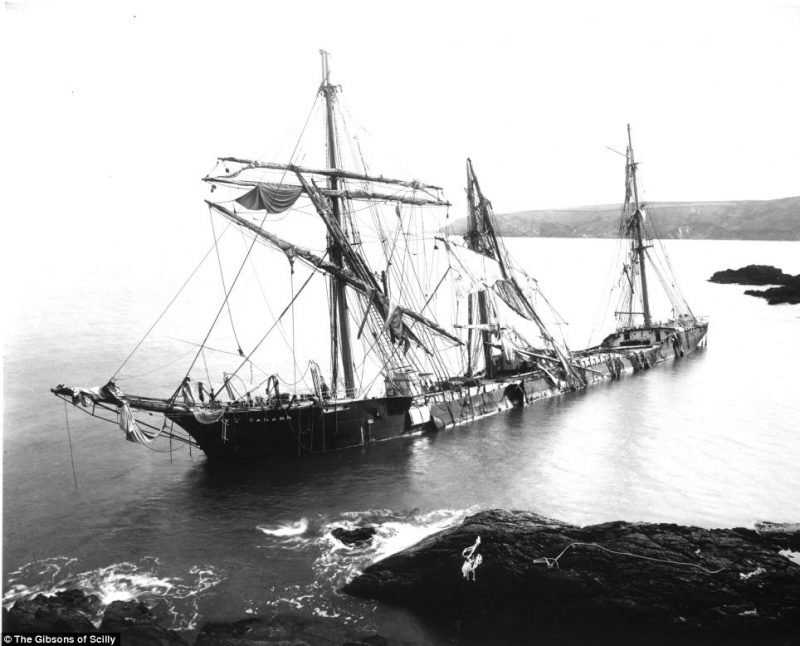 The Bay of Panama was wrecked under Nare Head, near St Keverne, Cornwall during a huge blizzard in March 1898. At the time it was wrecked it was carrying a cargo of Jute, used to make hessian cloth, from Calcutta in India, 18 of those on board died but 19 were rescued. 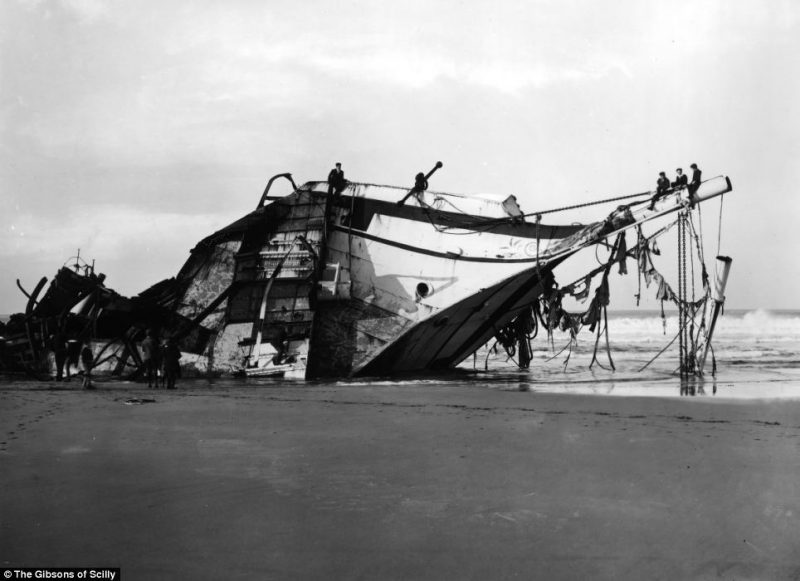 The French ship, the Seine was on her way to Falmouth with a cargo of nitrate when she ran into a gale off Scilly on Decermber 28, 1900. She ran ashore in Perran Bay, Perranporth, Cornwall, but thankfully all crew members were rescued with Captain Guimper reported as the last man to leave the ship before she was broken up in the next flood tide. 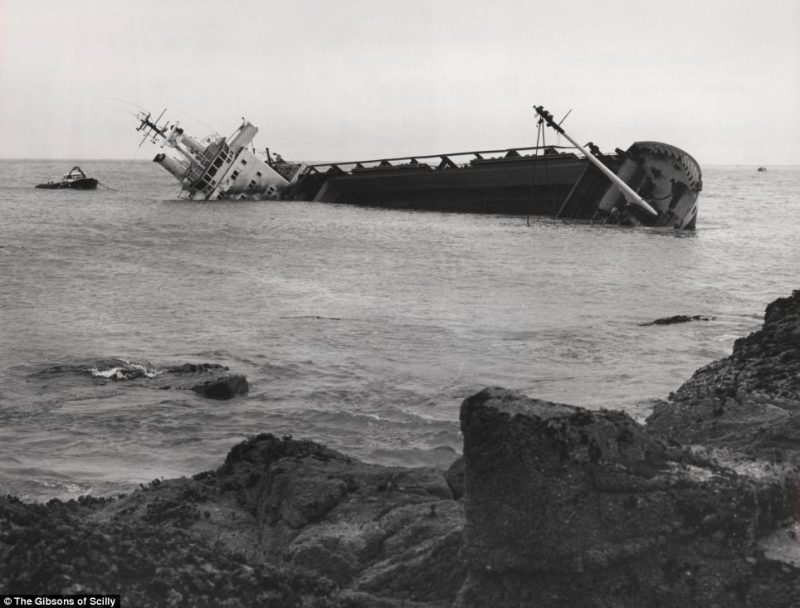 The German owned 300ft merchant vessel the Cita, sunk after it pierced its hull and ran aground in gale-force winds en route from Southampton to Belfast in March 1997. The mainly Polish crew of the stricken vessel were rescued a few hours after the incident by the RNLI and the wreck remained on the rock ledge for several days before slipping off into deeper water. 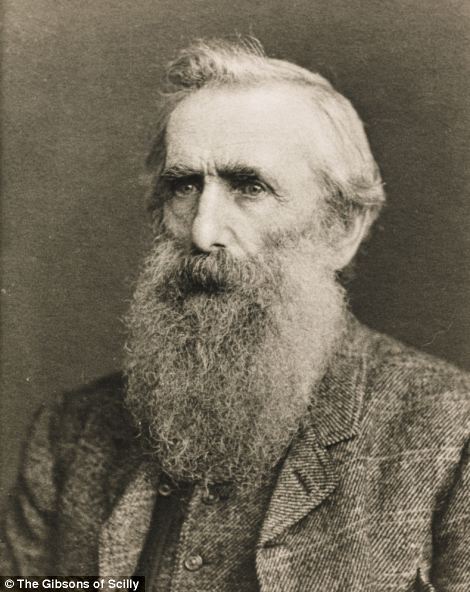 Founder and apprentice: John Gibson (above( started the business after buying his first camera and took on his son Herbert (below) as an apprentice in 1865 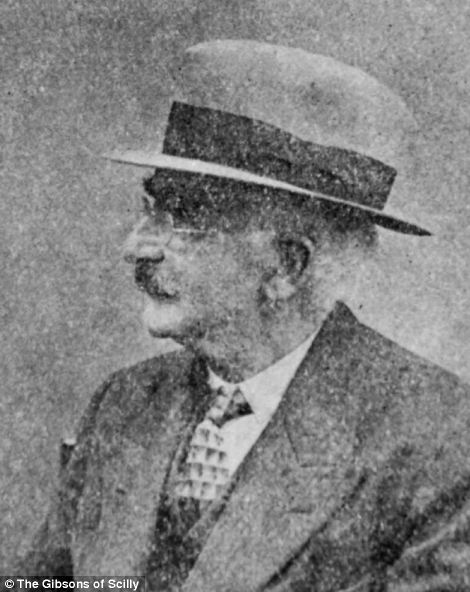 John Gibson and his family members could be considered early photojournalists, wanting to record scenes of the shipwrecks for history.  Each photo and each shipwreck had its own singular story; while many of the events were tragic, some had miraculous endings.  All were of interest to the British and others around the world. 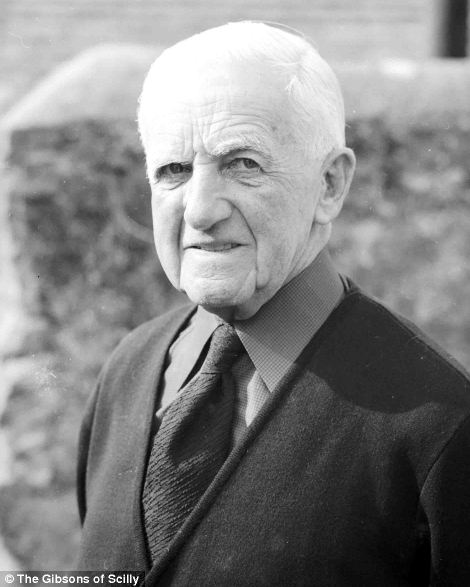 Generations: When Herbert Gibson died, the business changed hands to his son James (above) who had assisted him for ten years. Frank (below) left the Isle of Scilly after a family argument and went to learn about new technology which helped advance the business when he returned in 1957 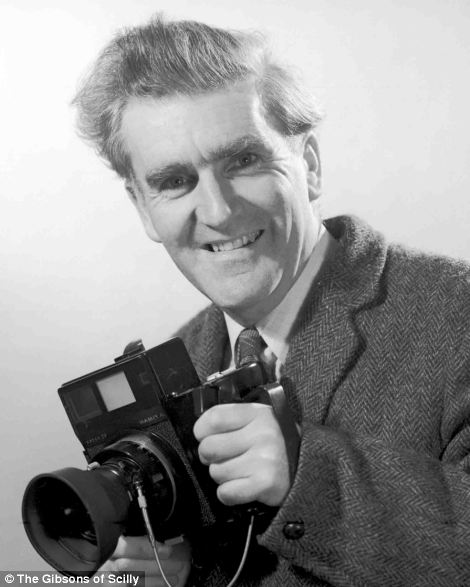 John Gibson was born in 1827 to a seaman.  Historians still do not know where John had gotten the money to purchase a camera, since cameras were still new then and only the wealthy could afford them.  By 1860, John had established himself as a professional photographer and had his own studio in Penzance.  He returned to the Scillies in 1865 and employed his two sons Alexander and Herbert as apprentices.  This would be the start of the family trade that would be passed down for four generations.  While John would capture the scenes Alexander and Herbert Gibson would write down each account they witnessed, forming a story for each picture.  In the auction, the stories will be included with the photo. 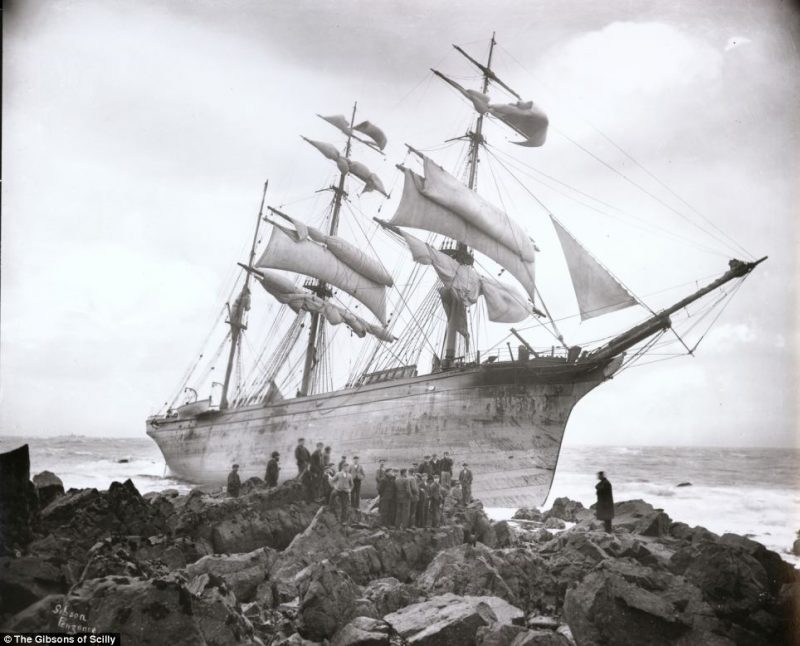 The Glenbervie, which was carrying a consignment of pianos and high quality spirits crashed into rocks Lowland Point near Coverack, Cornwall, in January 1902 after losing her way in bad weather. The British owned barque was laden with 600 barrels of whisky, 400 barrels of brandy and barrels of rum. All 16 crewmen were saved by lifeboat.

While working together, Herbert and Alexander were inseparable and formed a bond like no other.  Stories told say that Alexander nearly threw himself into Herbert’s grave in 1937 during the funeral. The Gibson family’s photographs were made famous in 1869 with the arrival of the first telegraph line to the Isles of Scilly. Before then, the Gibsons relied on letters and word of mouth to pass the information of the shipwrecks along.  With the telegraph coming to the Isles, they were able to get the news out much faster, and John had become the island’s local news correspondent – the first ever.  Alexander was then the official telegraphist, and together, the family became quite popular, since shipwrecks were major news. 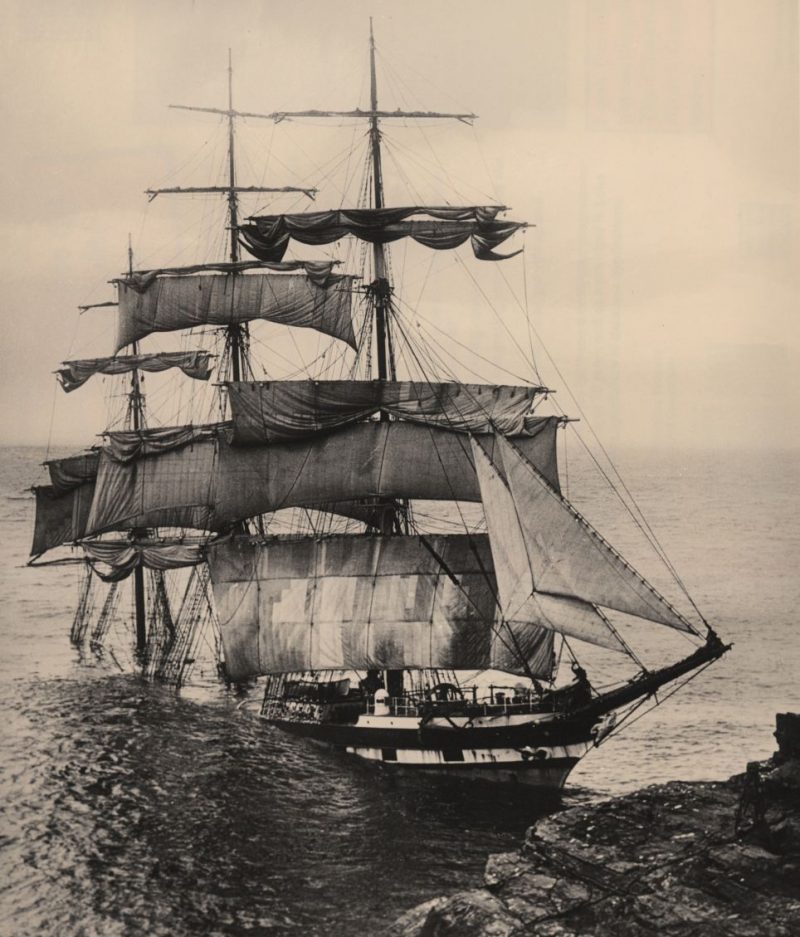 A British built iron sailing barque, The Cromdale, ran into Lizard Point, the most southerly point of British mainland, in thick fog. The three-masted ship was on a voyage from Taltal, Chile to Fowey, Cornwall with a cargo of nitrates. There were no casualties but within a week the ship had been broken up completely by the sea. 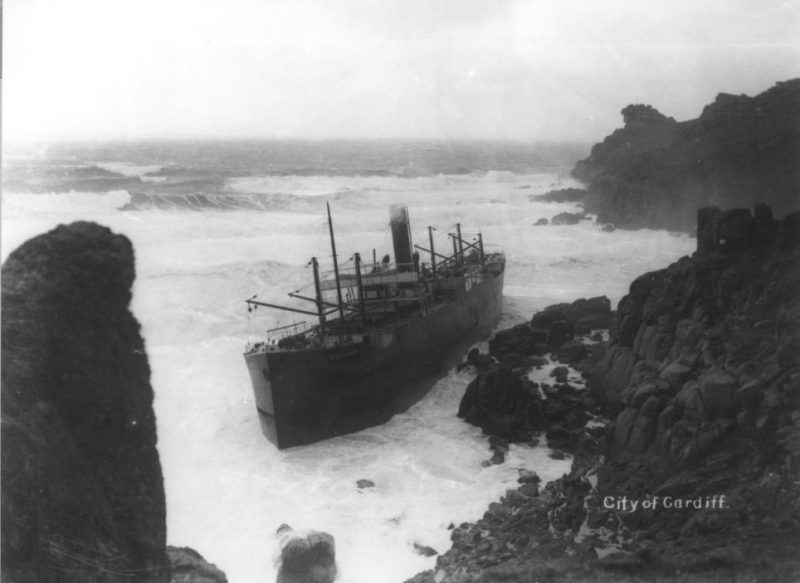 The steamer City of Cardiff pictured trapped on rocks with steam still coming out of the chimney, it was washed ashore by a strong gale in March 1912 at Nanjizel. The Captain, his wife and son, and the crew were all rescued but the vessel was left a total wreck.

In 1876 there was the wreck of a 3500-ton German steamer Schiller with over 300 people who died.  Alexander and John worked for days to get the story and photos ready.  John prepared the newspaper reports and Alexander would transmit them worldwide.  It is said that during this report, Alexander collapsed with exhaustion.  While the Gibsons’ job seemed easy to some, the family risked their lives to get the best coverage for the people who relied on them for news. They would often travel with hand carts to the shipwrecks, making their way over the dangerous coastline with a portable dark room, which included glass plates and heavy equipment. 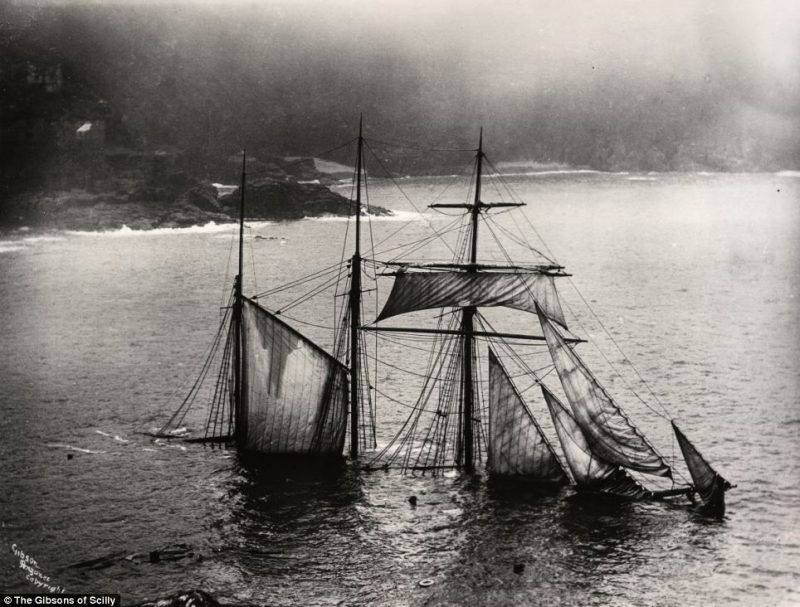 The Mildred was traveling from Newport to London when it got stuck in dense fog and hit rocks at Gurnards Head at midnight on the 6th April 1912. Captain Larcombe and his crew of two Irishmen, one Welshman and a Mexican rowed into St. Ives as their ship was destroyed by the waves. 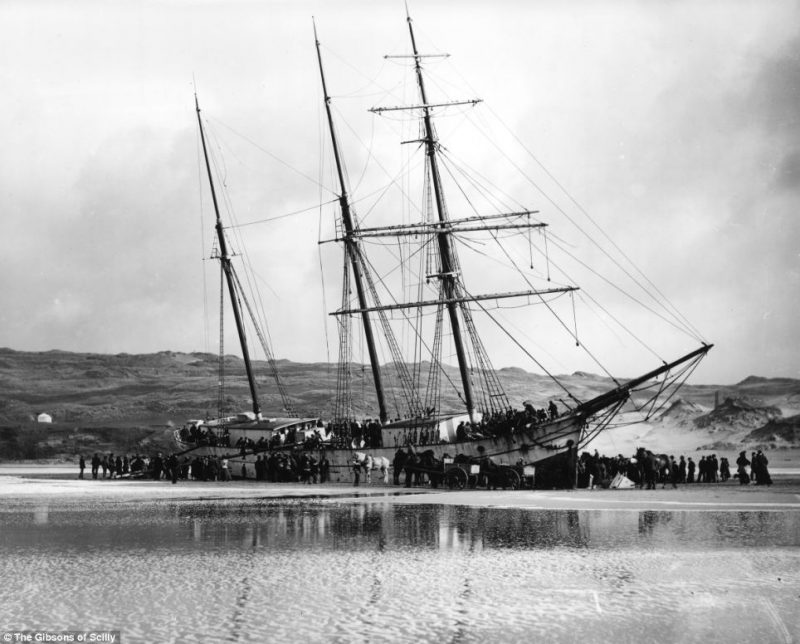 The Dutch cargo ship Voorspoed pictured surrounded by horses used to help take away the cargo after it was wrecked at Perran Bay, Cornwall in March 1901. All of those on board died in the incident as the ship travelled from to Newfoundland, Canada to Perranporth, Cornwall.

A shipwreck hunter, Rex Cowan, said that no one would have been able to depict photos better than the Gibson family.  Any person who views these photos cannot help but feel the excitement the Gibsons did.  Cowan is right, it is exciting and what is especially different is that the family photographed wrecks happening in the moment; many just as the ship went down.  A majority of the photos that are taken today are of the aftermath – ships lying in the ocean.  This is a whole new perspective and people can see the literal before-and-after photos.