Fashion in the years following World War II is characterized by the resurgence of haute couture after the austerity of the war years. Square shoulders and short skirts were replaced by the soft femininity of Christian Dior’s “New Look” silhouette, with its sweeping longer skirts, fitted waist, and rounded shoulders, which in turn gave way to an unfitted, structural look in the later 1950s.

Innovations in textile technology following the war resulted in new fabrics such as spandex, volleyball shorts and easy-care fabric finishes that fitted the suburban lifestyle of the 1950s with its emphasis on casual sportswear for both men and women. For the first time, teenagers became a force in fashion.

By 1947, the Paris fashion houses had reopened, and once again Paris resumed its position as the arbiter of high fashion. The “orderly, rhythmic evolution of fashion change” had been disrupted by the war, and a new direction was long overdue. The padded shoulder, tubular, boxy line, and short skirt (that had been around since before the war and was identified with uniforms) was gone. A succession of style trends led by Christian Dior and Cristóbal Balenciaga defined the changing silhouette of women’s clothes through the 1950s. Television  joined fashion magazines and movies in disseminating clothing styles.The new silhouette had narrow shoulders, a cinched waist, bust emphasis, and longer skirts, often with wider hems.

This beautiful historic video by British Pathe captures the fashion highlights and the trend style in what was and still is one of the most fashionable cities in the world, Paris. Take a look. 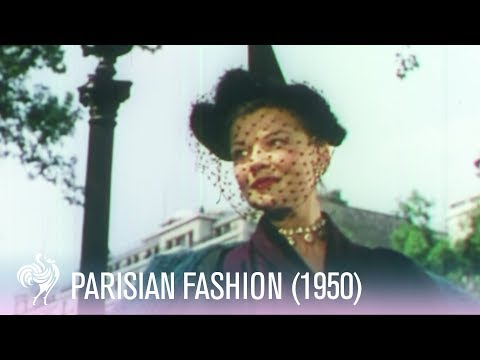 One result of the Post-World War II economic expansion was a flood of synthetic fabrics and easy-care processes. “Drip-dry” nylon, orlon and dacron, which could retain heat-set pleats after washing, became immensely popular.[Acrylic, polyester, triacetate and spandex were all introduced in the 1950s. During the 1940s nylon stockings were an incredibly popular product as they were a lightweight alternative to silk and wool stockings. For the duration of WW2 the Du Pont company produced nylon exclusively for the war effort. At the end of 1945 the demand for nylon stockings was so great that Nylon riots ensued at stores selling the products

From the mid-1950s, a new unfitted style of clothing appeared as an alternative to the tight waist and full skirt associated with the New Look. Vogue Magazine called the knitted chemise the “T-Shirt dress.” Paris designers began to transform this popular fashion into haute couture.  Spanish designer Balenciaga had shown unfitted suits in Paris as early as 1951 and unfitted dresses from 1954. In 1958, Yves Saint Laurent, Dior’s protégé and successor, debuted the “Trapeze Line,” adding novel dimension to the chemise dress. These dresses featured a shaped bodice with sloping shoulders and a high waist, but the signature shape resulted from a flaring bodice, creating a waistless line from bodice to knees. These styles only slowly gained acceptance by the wider public.Coco Chanel made a comeback in 1954 and an important look of the latter 1950s was the Chanel suit, with a braid-trimmed cardigan-style jacket and A-line skirt. By 1957, most suits featured lightly fitted jackets reaching just below the waist and shorter, narrower skirts. Balenciaga’s clothes featured few seams and plain necklines, and following his lead chemise dresses without waist seams, either straight and unfitted or in a princess style with a slight A-line, became popular. The sleeveless, princess-line dress was called a skimmer. A more fitted version was called a sheath dress.