This footage filmed by Thomas Edison in 1894, shows sioux doing the Buffalo Dance

Buffalo Dance is an 1894 American 16-second black-and-white silent film shot in Thomas Edison’s Black Maria studio. The film was made at the same time as Edison’s Sioux Ghost Dance. It is one of the earliest films made featuring Native Americans. In this film, produced by William K. L. Dickson with William Heise as cinematographer, three Sioux warriors named Hair Coat, Parts His Hair and Last Horse dance in a circle and two other Native Americans sit behind them and accompany them with drums. According to the Edison catalog, the actors were “genuine Sioux Indians, in full war paint and war costumes.” They were also apparently veterans of Buffalo Bill’s Wild West show. 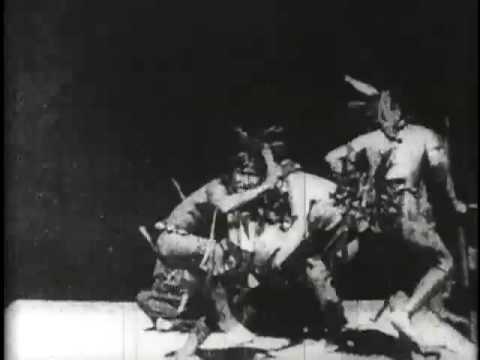 Native Americans were also a part of Cody’s show. The Native Americans who took part in the show were mostly Plains Indians like the Pawneeand Sioux. They participated in staged “Indian Races” and historic battles, and often appeared in attack scenes attacking whites in which their savagery and wildness was played up. They also performed talented dances, such as the Sioux Ghost Dance. In reality the performance of the ghost dance meant that trouble was brewing and about to break out, but it wasn’t portrayed as such in the show. The Native Americans always wore their best regalia and full war paint. Cody treated them with great respect and paid them adequately. The extent of his respect was demonstrated when he named the Native Americans as “the former foe, present friend, the American”.

Native Americans in the show also had their claim to fame, the best known being Chief Sitting Bull. Sitting Bull joined the show for a short time and was a star attraction alongside Annie Oakley. It was said that he only agreed to join the show because he was fascinated with Annie Oakley and Buffalo Bill assured him that if he joined, he could see her perform all the time. During his time at the show, Sitting Bull was introduced to President Grover Cleveland, which he thought proved his importance as chief.He was friends with Buffalo Bill and highly valued the horse that was given to him when he left the show. Other familiar Native Americans names who performed in the show wereChief Joseph, Geronimo, and Rains in Face (who reportedly killed George A. Custer).

« The arrival of the first human settlers in Americas
The forgotten and abandoned: amazing urbex photography of Autopsy of Adelaide »