Santa Claus is an uninhabited desert town, once home to the Christmas Tree Inn, a holiday-themed amusement park that now sits abandoned and decaying in Mohave County, Arizona. It was founded in 1937 by Nina Talbot, a real estate agent from Los Angeles. She made plans to use the Santa theme in a parched desert location to attract buyers for her surrounding, subdivided land. The town of Santa Claus was established in the mid-1930s by a real estate developer named Nina Talbot.

In connection with its beginnings, Santa Claus received several attractions and buildings, including the Kit Carson Guest House which was renamed the Santa Claus Inn. By 1942, the town had become a full-fledged tourist spot. Among Santa Claus’ fairytale-themed attractions during the town’s heyday were two tiny abodes, Cinderella’s Doll House (which is no longer standing) and the House of the Third Little Pig. Photos: Todd Huffman/Flickr Rear view of the Santa Claus Land Sales Office looking northeast. To the right is the Old 1225, a derailed, pink children’s train tagged with graffiti. U.S. Route 93, Ithaca Peak (left), and Turquoise Mountain (right) can be seen in the background.

After twelve years operating Santa Claus, Talbot’s land resale plans for Santa Claus never materialized, in part because the only inhabitants in the town were the ones working there. Talbot ended up selling the entire park in 1949. In the early 1950s, the Santa Claus Inn was renamed to The Christmas Tree Inn, but the popularity of the town declined over the years and in the 1970s the town fell into disrepair.

The place changed after 1949 when Talbot sold the town to new owners. By the 1970s, Santa Claus had begun to decline in popularity, and the buildings began to fall into disrepair.

The new owner, Tony Wilcox, put the town up for sale in 1983 but was unable to find a buyer at the asking price. The last remaining business closed in 1995 and by the beginning of the twenty-first century, the town was officially abandoned. The small, Christmas-themed collection of gift shops and child amusements went out of business in 1995.

The town was described as “an abandoned, road-rise pull off with a handful of old buildings – all closed” with “This is it! Santa’s Land” and “Santa’s Desert Retreat” being the only two signs left from the early days of the town. 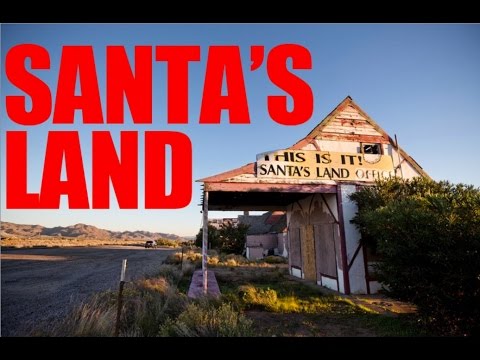