That’s right – these were being worn 1000 years before the birth of Christ. Archaeologists say that the two men whose remains were recently excavated from tombs in western China put their pants on one leg at a time, just like the rest of us do today.

With straight-fitting legs and a wide crotch, the ancient wool trousers resemble modern riding pants, says a team led by archaeologists Ulrike Beck and Mayke Wagner of the German Archaeological Institute in Berlin. The discoveries, uncovered in the Yanghai graveyard in China’s Tarim Basin, support previous work suggesting that nomadic herders in Central Asia invented pants to provide bodily protection and freedom of movement for horseback journeys and mounted warfare, the scientists report May 22 2014 in Quaternary International.

So not much changes – these highly decorated pants must have been someones pride and joy as a great deal of work has gone into them.  The two men were around 40 years old when they died, and they were buried along with a decorated leather bridle, a decorated horse tail, a wooden horse bit, a battle-axe, whip, bow sheath, and a leather bracer for arm protection.  Their trouser design comprised three pieces of wool cloth, one for each leg and one for the crotch, which were stitched together and fastened at the waist with strings.  They were finished with woven designs on the legs.

Beck and Wagner described the trousers as “a ground-breaking achievement in the history of cloth making.”

“This new paper definitely supports the idea that trousers were invented for horse riding by mobile pastoralists, and that trousers were brought to the Tarim Basin by horse-riding peoples,” remarks linguist and China authority Victor Mair of the University of Pennsylvania.  Previously, Europeans and Asians wore gowns, robes, tunics, togas or — as observed on the 5,300-year-old body of Ötzi the Iceman — a three-piece combination of loincloth and individual leggings.

A dry climate and hot summers helped preserve human corpses, clothing and other organic material in the Tarim Basin. More than 500 tombs have been excavated in a graveyard there since the early 1970s.

Earlier research on mummies from several Tarim Basin sites, led by Mair, identified a 2,600-year-old individual known as Cherchen Man who wore burgundy trousers probably made of wool. Trousers of Scythian nomads from West Asia date to roughly 2,500 years ago.

Mair suspects that horse riding began about 3,400 years ago and trouser-making came shortly thereafter in wetter regions to the north and west of the Tarim Basin. Ancient trousers from those areas are not likely to have been preserved, Mair says.

Horse riding’s origins are uncertain and could date to at least 4,000 years ago, comments archaeologist Margarita Gleba of University College London. If so, she says, “I would not be surprised if trousers appeared at least that far back.” 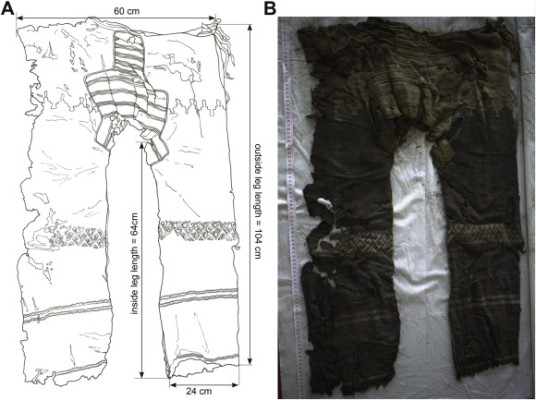 The two trouser-wearing men entombed at Yanghai were roughly 40 years old and had probably been warriors as well as herders, the investigators say. One man was buried with a decorated leather bridle, a wooden horse bit, a battle-ax and a leather bracer for arm protection. Among objects placed with the other body were a whip, a decorated horse tail, a bow sheath and a bow.

Beck and Wagner’s group obtained radiocarbon ages of fibers from both men’s trousers, and of three other items in one of the tombs.

The Yanghai Tombs (also spelled Yang-Hai) are located in the desert Turpan Basin of Shanshan County, Turpan District, in the Xinjiang Autonomous Region of northwest China. Yangshai lies at the base of the Fire or Flaming Mountains (Huoyan Shan) and the foothills of the Heavenly Mountains (Tian Shan), on the edge of the Turpan Oasis, that has drawn people for thousands of years. Yangshai is about 30 km southeast of the main site of Turfan or Gaochang.

The tombs are grouped into three localities: Group 1, Group 2, and Group 3. The localities are really artificial: the cemetery is one big location, measuring some 54,000 square meters (or about 600,000 square feet) in area. The people buried in the tombs were nomadic pastoralists of the Subeixi culture, one of many Steppe Societies who roamed the deserts and steppes of central Eurasia from Ukraine to China.

The Yanghai Tombs were discovered in the early 1970s by local Turpan villagers who were repairing a karez, and the tombs were excavated through the early 21st century.

Much of the publication in English has been focused on the analysis of the hundreds of mummies and thousands of artifacts recovered from the tombs. More than 500 tombs were excavated in 2003 alone, under the direction of E.G. Lu, with support from the Xinjiang Institute of Archaeology and the Bureau of Cultural Relics of Turpan Prefecture.

The trousers were sewn together from three pieces of brown-colored wool cloth, one piece for each leg and an insert for the crotch. The tailoring involved no cutting, but included side slits, strings for fastening at the waist and woven designs on the legs.