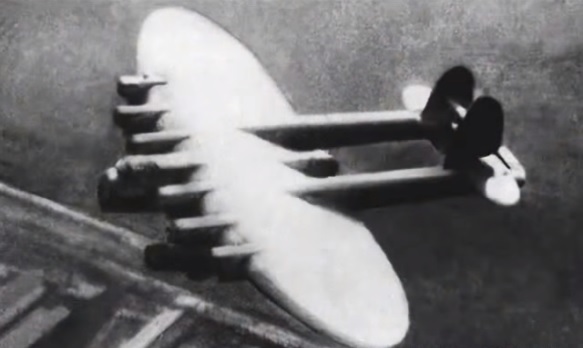 For some reason, the Soviets and the Germans seemed to have thought that big really was beautiful. During WWII Hitler was obsessive about size. Just think of the planned super tank. It would have weighed 1,000 tons and fired a long-distance rocket that could have pounded London or New York into brick dust – but no road could support it. The you have to think of the German railway gun – the Schwerer Gustav. It weighed 1350 tons and took a 250 to assemble the gun in 3 days (54 hours), 2,500 to lay track and dig embankments. 2 Flak battalions to protect the gun from air attack.

The Soviets liked big too. The image below is of the unbelievably massive Lun class ekranoplan. The was a cold war project but the K-7 was a 1930’s project. With a wingspan greater than the B-52 and a much greater wing area, the K-7 was one of the biggest aircraft built before the jet age. It was only one engine short of the B-52 as well, having the curious arrangement of six pulling on the wing leading edge and one pushing at the rear. 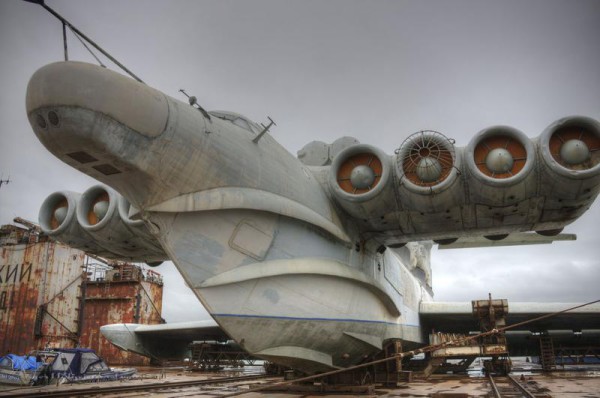 1987 was the year when the first 350 tons ground effect “ship” from the series of Soviet battle missile carriers was produced. It was called Lun after the Russian name for a bird of prey – hen harrier.

The dream of huge transports capable of carrying large numbers of passengers found fertile ground in many countries, but never really bore fruit until after the Second World War. Between the wars-in addition to the dreadful ‘Capronisimo’ – there were a number of big transport aircraft designed in Europe and America, but only a handful were ever built, and none of the really big dreams (100 + passengers) ever actually went into service.

There was Claudius Dornier’s big Do-X of 1929 which could carry 150 passengers, but it took her 10 months to fly from Germany to New York on a demonstration flight in 1930-31. The Pan Am Clippers (built by Martin, Sikorsky and later Boeing) succeeded in conquering the airways on a global scale in the years immediately before World War II, but the biggest of them, the Boeing 314, could carry only 74 passengers.

Among those which were built, there were few stranger than the Kalinin K-7 and the Tupolev Ant-20. It was strange on one hand because of the fact that so ponderous and clumsy aircraft could actually fly, and on the other hand because the big craft were developed in the Soviet Union during the Stalin years. It would seem that within the context of Josef Stalin’s paranoid quest for socialist egalitarianism, so grand a concept as a 120- passenger airliner would have no place. 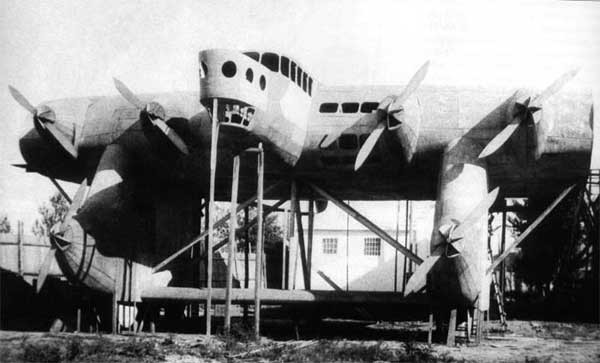 Prototype of the Kalinin K-7, showing its original configuration. Looks like some sort of pre-historic monster. Source 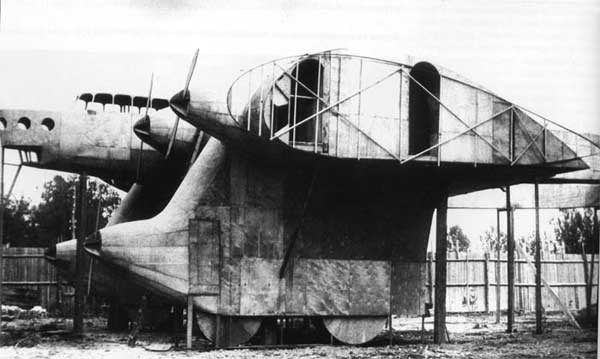 Prototype of the Kalinin K-7 – side view. Source

A: The Kalinin K-7 was one of the first metal monster aircraft with a twin-boom layout. B: The K-7 was said to have had a pilot, 18 crew members and one passenger when it crashed, killing all but five of the crew. C: As originally designed the K- 7, was to have engines in the undercarriage sponsons. When completed, the bomber had gun positions, the bomb load and an internal staircase. D: The K-7’s control surfaces were all deflected by the use of large trim tab surfaces mounted on struts.
Source K-7 – only 30 years after the Wrights. The Kalinin K-7  was a heavy experimental aircraft designed and tested in the Soviet Union in the early 1930s. It was of unusual configuration with twin booms and large underwing pods housing fixed landing gear and machine gun turrets. In the passenger version, seats were arranged inside the 2.3-meter thick (7 ft 7 in) wings. The airframe was welded from KhMA chrome-molybdenum steel. The original design called for six engines in the wing leading edge but when the projected loaded weight was exceeded, two more engines were added to the trailing edges of the wing, one right and one left of the central passenger pod. Nemecek states in his book that at first only one further pusher engine was added.

Designed by World War I and civil war pilot Konstantin Kalinin at the aviation design bureau he headed in Kharkiv, with a wingspan close to that of a B-52 and a much greater wing area, the K-7 was one of the biggest aircraft built before the jet age. It had an unusual arrangement of six tractor engines on the wing leading edge and a single engine in pusher configuration at the rear. 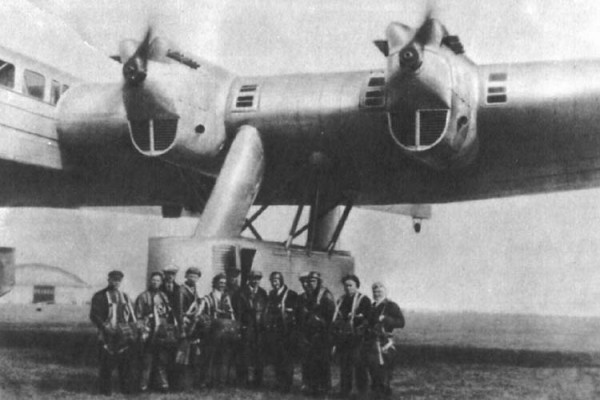 The Kalinin K7 crew posing in front of the Kalinin K-7. Look closely and you’ll see the engines churning away. Source

The K-7 first flew on 11 August 1933. The very brief first flight showed instability and serious vibration caused by the airframe resonating with the engine frequency. The solution to this was thought to be to shorten and strengthen the tail booms, little being known then about the natural frequencies of structures and their response to vibration. The aircraft completed seven test flights before a crash due to structural failure of one of the tail booms on 21 November 1933. The existence of the aircraft had only recently been announced—by Pravda, which declared it was “victory of the utmost political importance,” since it had been built with USSR steel rather than imported steel. The accident killed 14 people aboard and one on the ground.Flight speculated that sabotage was suspected as the investigating committee had representation by the state security organization, the Joint State Political Directorate (OGPU).

However, there appeared recently some speculation in the Russian aviation press about the role of politics and the competing design office of Andrei Tupolev, suggesting possible sabotage. Although two more prototypes were ordered in 1933, the project was cancelled in 1935 before they could be completed. In 1938, Konstantin Kalinin was executed as an enemy of the state during Stalinist purges.