Ever seen Marilyn Monroe riding a Penny Farthing? Look at some of these wacko pictures of ladies on this strange bike

To be honest, “penny farthing”  makes me feel dizzy just by looking at the photo of it, but the daredevils of the yesteryear were not afraid to do so.  There is something weird and beautiful about these huge wheeled bicycles that makes you think of  how much fun these guys had riding  the funny looking high wheel.

The penny-farthing, also known as a high wheel, high wheeler and ordinary, is a type of bicycle with a large front wheel and a much smaller rear wheel. It was popular after the boneshaker until the development of the safety bicycle in the 1880s. It was the first machine to be called a “bicycle.”

Although the name “penny-farthing” is now the most common, it was probably not used until the machines were nearly outdated; the first recorded print reference is from 1891 in Bicycling News. It comes from the British penny and farthing coins, one much larger than the other so that the side view resembles a penny leading a farthing. For most of their reign, they were simply known as “bicycles”. In the late 1890s, the name “ordinary” began to be used, to distinguish them from the emerging safety bicycles; this term and “hi-wheel” (and variants) are preferred by many modern enthusiasts. Source: Vintage Everyday 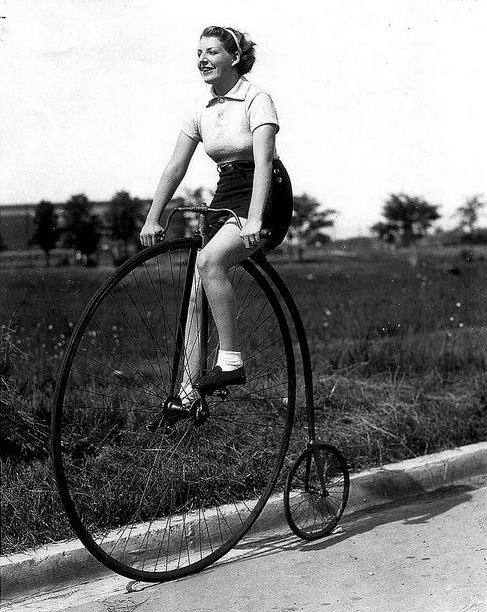 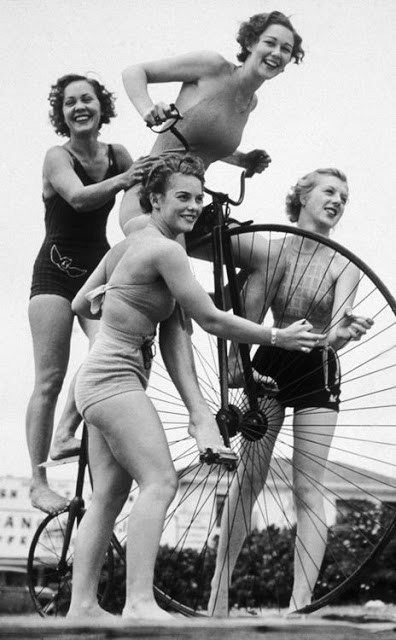 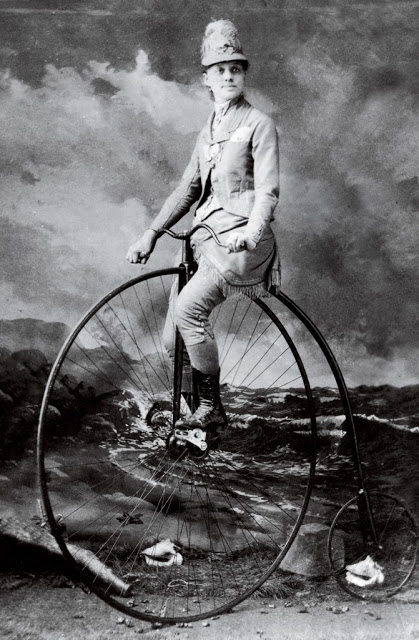 In 1869, Eugène Meyer, a Frenchman, invented the High-Bicycle design and fashioned the wire-spoke tension wheel. Around 1870, English inventor James Starley, described as the father of the bicycle industry, and others, began producing bicycles based on the French boneshaker but with front wheels of increasing size, because larger front wheels, up to 1.5 m (60 in) in diameter, enabled higher speeds on bicycles limited to direct drive.In 1878, Albert Pope began manufacturing the Columbia bicycle outside of Boston, starting their two-decade heyday in America. 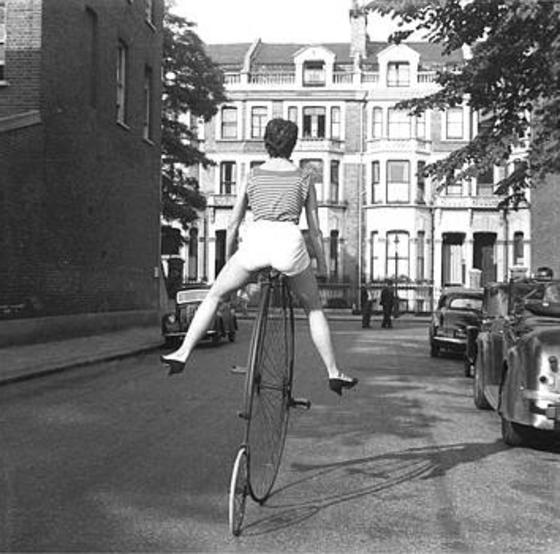 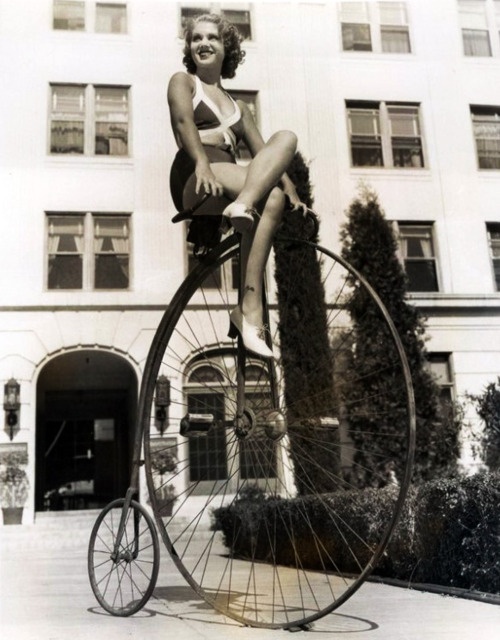 Grace Bradley on her penny farthing 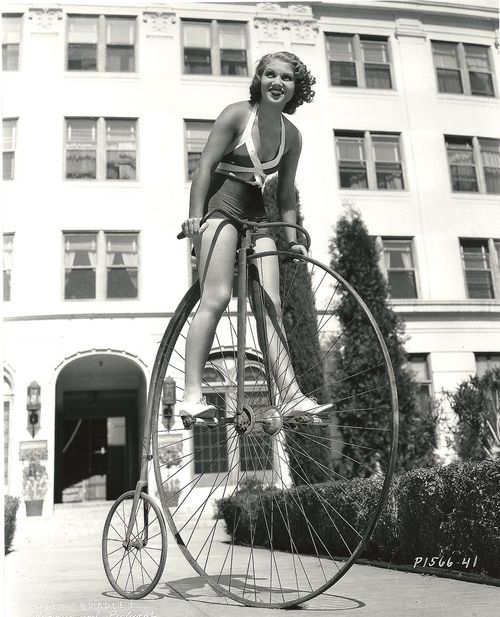 The well-known dangers of the penny-farthing were, for the time of its prominence, outweighed by its strengths. While it was a difficult, dangerous machine, it was simpler, lighter, and faster than the safer velocipedes of the time. Two new developments changed this situation, and led to the rise of the safety bicycle. The first was the chain drive, originally used on tricycles, allowing a gear ratio to be chosen independent of the wheel size. The second was the pneumatic bicycle tire, allowing smaller wheels to provide a smooth ride.

The nephew of one of the men responsible for popularity of the penny-farthing was largely responsible for its demise. James Starley had built the Ariel (spirit of the air) high-wheeler in 1870; but this was a time of innovation, and when chain drives were upgraded so that each link had a small roller, higher and higher speeds became possible without the large wheel. In 1885, Starley’s nephew John Kemp Starley took these new developments to launch the Rover Safety Bicycle, so-called because the rider, seated much lower and farther behind the front wheel contact point, was less prone to a header. 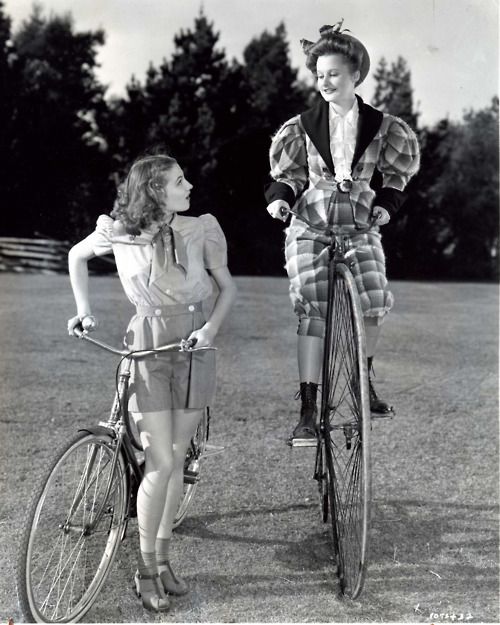 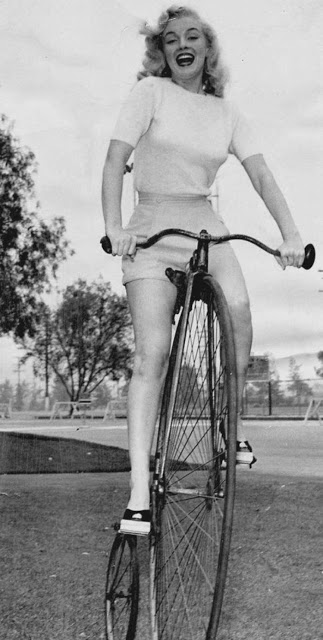 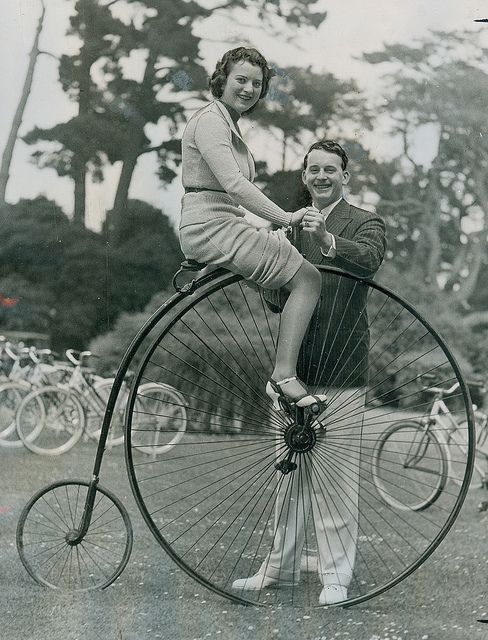 Riding a penny farthing in a skirt and heels, 1930 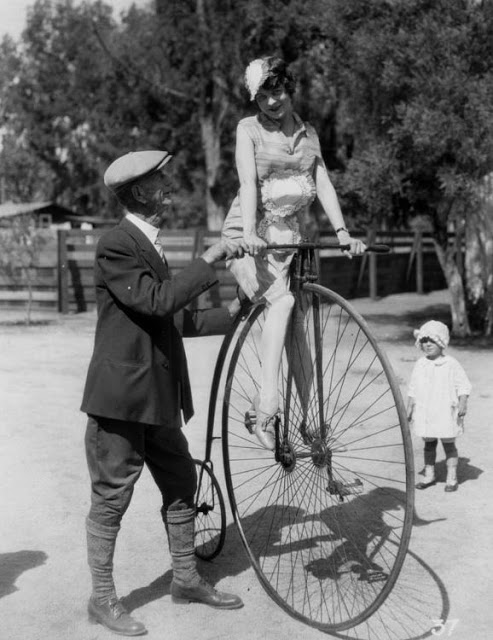 Riding a penny farthing in Hollywood, 1927 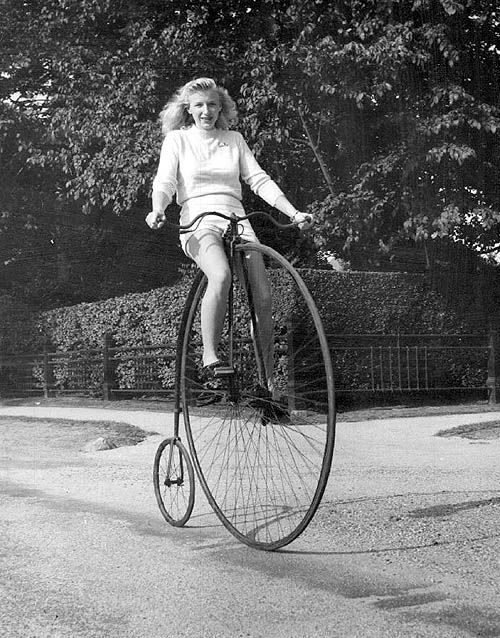 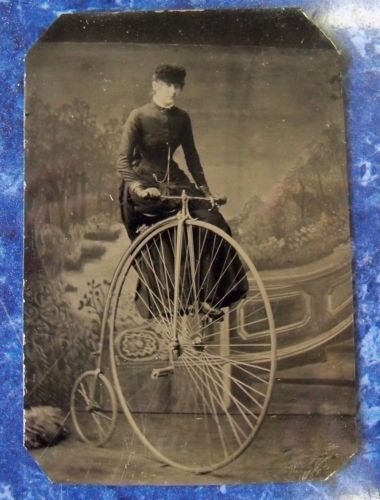