For over 146 years, a mysterious submarine wreck has ‘surfaced’ at low tide every day

Nearly 14 years ago an archeologist and diver, Jim Delgado, found something magnificent.  He was on a ship passing the San Telmo Island in Pearl Archipelago, Panama when it occurred to him that the area was known for a sunken Japanese WWII submarine.  Intrigued by the story and the history behind the possible wreck, Delgado wondered about initiating a mission to find it.  Luckily, from his ship he saw something towering on the island.  It was all rusted out and Delgado felt he had to go investigate. 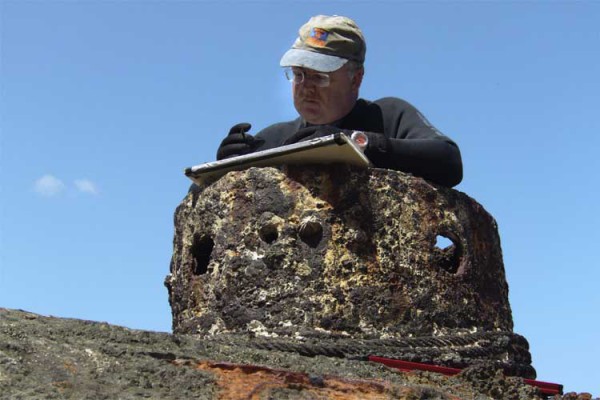 In 2001, after many years of misidentification, the remains of the Sub Marine Explorer piqued the interest of archaeologist James P. Delgado of the Institute of Nautical Archaeology. source

But if the sunken submarine was Kroehl’s, then why would it be in Panama if it was only tested in a New York river? After more research, Delgado found out that the first trial was actually successful; that the submarine was then taken to Panama to be used for collecting pearls.

It is said that the submarine actually lasted a few weeks while collecting pearls, however, something must have gone terribly wrong to leave it rusted out in the middle of an ocean.

The submarine managed to harvest pearls successfully for a while.  In 1869 another New York Times article stated that one of the pearl-harvesting missions brought up almost 10 tons of oysters and pearls which estimated about $2,000.  However, all men who had been on the submarine contacted fever and decompression sickness; the vessel was condemned as harmful to the crewmembers’ health.  A year after the submarine arrived in Panama, Kroehl himself died from decompression sickness from diving in the submarine.  The sub was then taken to the island where it has remained beached ever since.  Delgado found it nearly 130 years later. 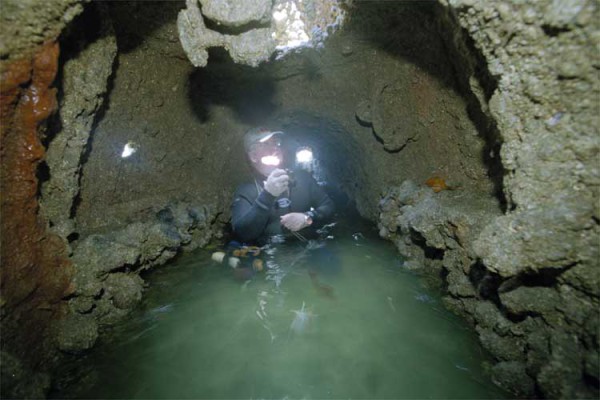 The inside of the wreck. Fewer than 5 subs before 1870 have survived. source

Sub Marine Explorer is a submersible built between 1863 and 1866 by Julius H. Kroehl and Ariel Patterson in Brooklyn, New York for the Pacific Pearl Company. It was hand powered and had an interconnected system of a high-pressure air chamber or compartment, a pressurized working chamber for the crew, and water ballast tanks. Problems with decompression sickness and overfishing of the pearl beds led to the abandonment of Sub Marine Explorer in Panama in 1869 despite publicized plans to shift the craft to the pearl beds of Baja California.

Sub Marine Explorer had an external high air pressure chamber which was filled with compressed air at a pressure of up to 200 pounds per square inch (1,400 kPa) by a steam pump mounted on an external support vessel. Water ballast tanks were flooded to make the vessel submerge.

Pressurized air was then released into the vessel to build up enough pressure so it would be possible to open two hatches on the underside, while keeping water out. This meant that air pressure inside the submarine had to equal water pressure at diving depth, exposing the crew to high pressure, making them susceptible to decompression sickness, which was unknown at the time. To surface, more of the pressurized air was used to empty the ballast tanks of water.

A contemporary (August 1869) newspaper account of dives in Sub Marine Explorer off Panama documents 11 days of diving to 103 feet (31 m), spending four hours per dive, and ascending with a quick release of the pressure to ambient (sea level) pressure. Modern reconstruction of Explorer’s systems suggests an ascension rate of 1 foot per second (0.30 m/s), or a rise to the surface in just under two minutes.

The problems of decompression do not appear to have been clearly understood; the contemporary reference notes that at the conclusion of the dives, “all the men were again down with fever; and, it being impossible to continue working with the same men for some time, it was decided, the experiment having proved a complete success, to lay the machine up in an adjacent cove….”(The New York Times, August 29, 1869)

« The very sad letter that Marilyn Monroe sent to her psychiatrist
Black Knight: This strange object has been orbiting the earth for 50 years »