Ghost ship: Inside the Costa Concordia – a photographer swam out to the vessel to photograph the ghostly interior

Jonathan Danko Kielkowski is a German based photographer and artist. January 13 marked the fourth anniversary of the sinking of the cruise ship Costa Concordia off the Tuscan holiday island of Giglio.

32 people died in the incident and the salvage and scrapping efforts are estimated to total in the range of $2 billion, in addition to the vessel’s $500 million value. It was the most expensive maritime wreck recovery in history.

Kielkowski has just published a book via www.whitepress.com. He swam out to the wreck of the Concordia before the scrapping of her was started.

His book documents moments in time of a destroyed cruiser and destroyed lives. Four years ago, on January 13, 2012, Costa Concordia began to capsize after striking a rock off the coast of the island of Giglio. 32 people died.

Costa Concordia was a Concordia-class cruise ship built in 2004  It was wrecked off the coast of Isola del Giglio in Italy on 13 January 2012. It was declared a total loss and later towed to the port of Genoa where it was scrapped.

On 13 January 2012 at about 9:45 p.m., in calm seas and overcast weather, under command of Captain Francesco Schettino, Costa Concordia struck a rock in the Tyrrhenian Sea just off the eastern shore of Isola del Giglio, on the western coast of Italy about 62 miles northwest of Rome.

This tore a 60 ft gash on the port side of her hull, which soon flooded parts of the engine room resulting in power loss to her propulsion and electrical systems.

With water flooding in and listing, the ship drifted back to Giglio Island where she grounded  550 yards north of the village of Giglio Porto.

Despite the gradual sinking of the ship, its complete loss of power, and its proximity to shore in calm seas, an order to abandon ship was not issued until over an hour after the initial impact.

Although international maritime law requires all passengers to be evacuated within 30 minutes of an order to abandon ship, the evacuation of Costa Concordia took over six hours and not all passengers were evacuated.

Costa Concordia drifted back and grounded near shore, then rolled onto her starboard side, lying in an unsteady position on a rocky underwater ledge.

The captain, Francesco Schettino, ordered evacuation after an hour of drifting, during which the ship had started to list

Almost half of the ship remained above water, but it was in danger of sinking completely into a trough 230 ft deep 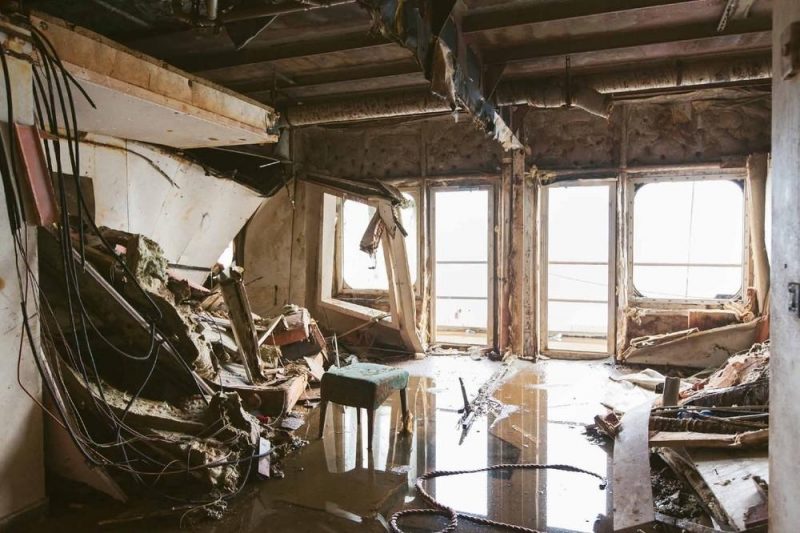 The search for the two still missing continued after the ship was uprighted on 17 September 2013. On 26 September 2013, unidentified remains were found near the central part of the ship, where they were last seen. The remains were to be subjected to DNA testing to determine their identity 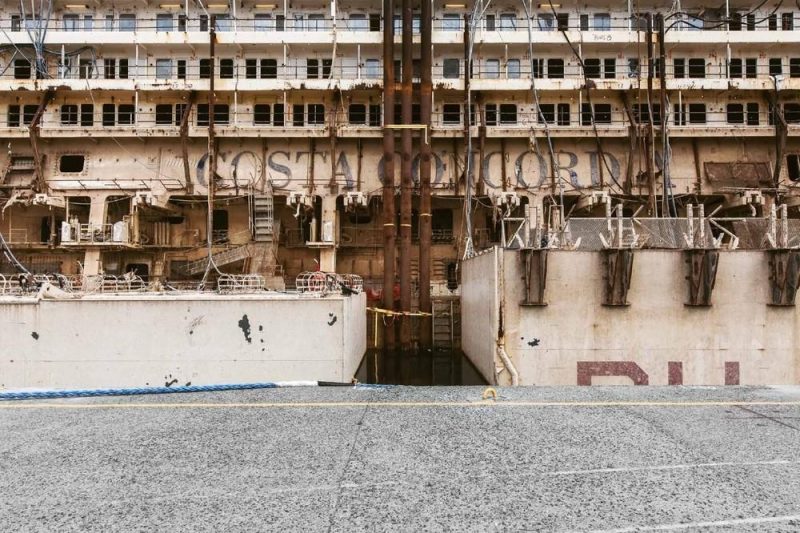 On 15 January 2013, the final two bodies were thought to have been located (those of a female passenger and male crew member), but reportedly could not be recovered, as their location near the stern made recovery inaccessible until the ship could be rotated. However, the companies performing the refloating operation denied any bodies had been found 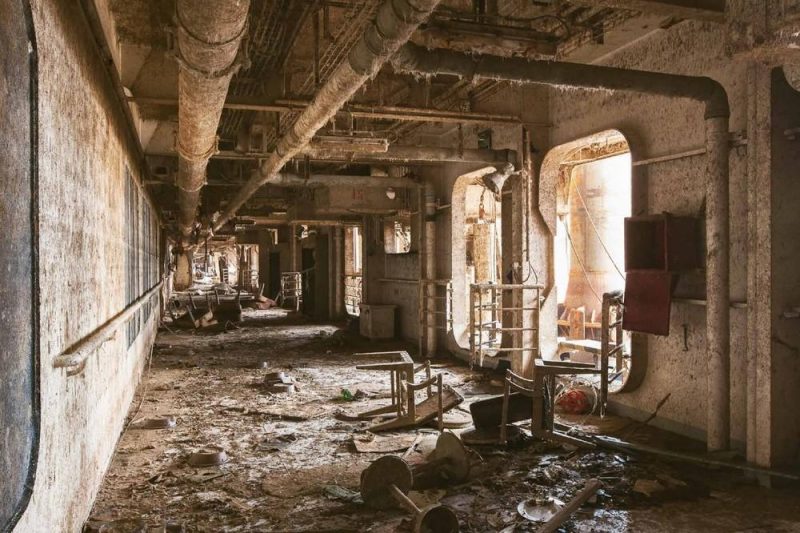 On 28 January, the 17th body, that of a female crew member, was recovered from a submerged part of the vessel 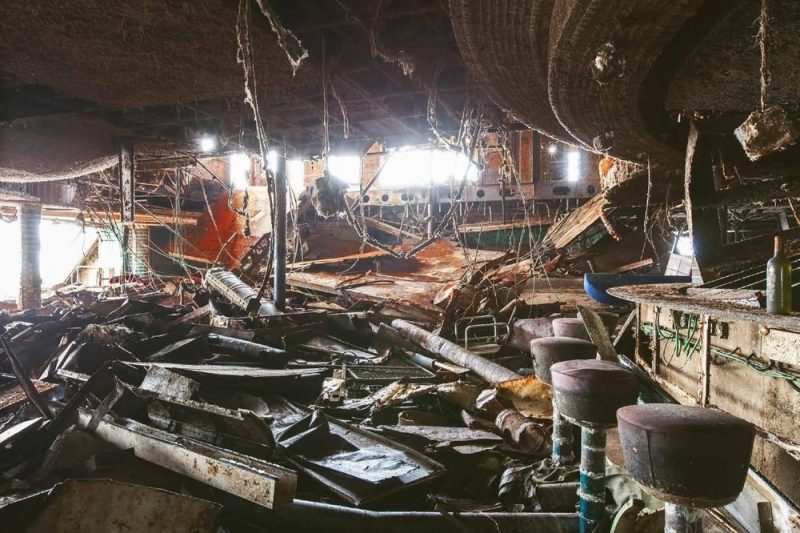 Divers and firefighters continued to search for survivors who might have been trapped in the ship, and rescued a Korean newlywed couple trapped in a cabin two decks above the water line, and the ship’s purser, who had a broken leg 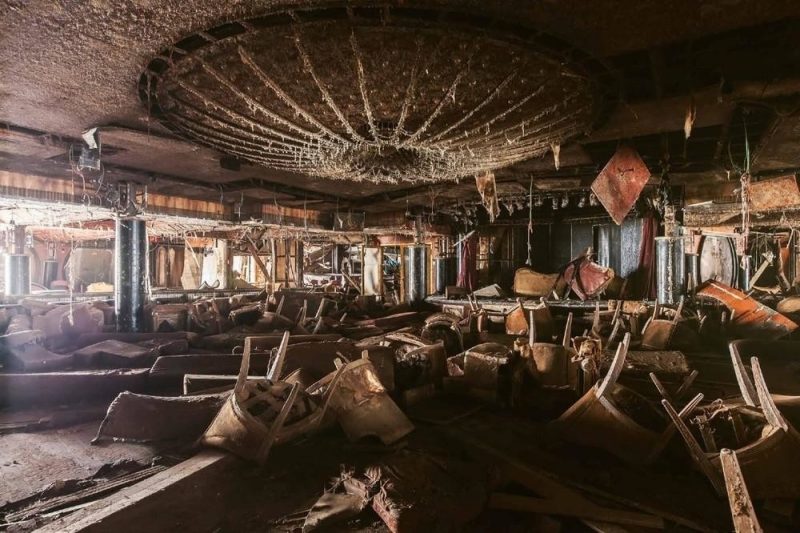 He was later charged with failing to describe to maritime authorities the scope of the disaster and with abandoning incapacitated passengers. Costa Cruises offered compensation to passengers (to a limit of €11,000 a person) to pay for all damages, including the value of the cruise. One-third of the passengers took this offer. The company also at first offered to pay Captain Schettino’s legal costs, but later changed its position 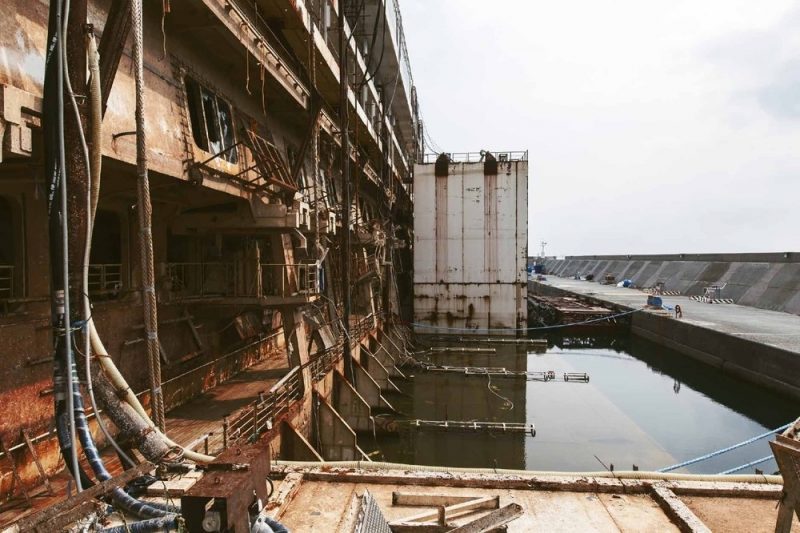 There were immediate fears of an ecological disaster because the partially submerged wreck was in danger of slipping into much deeper water, with a risk of oil pollution that could have devastated the popular tourist zone. 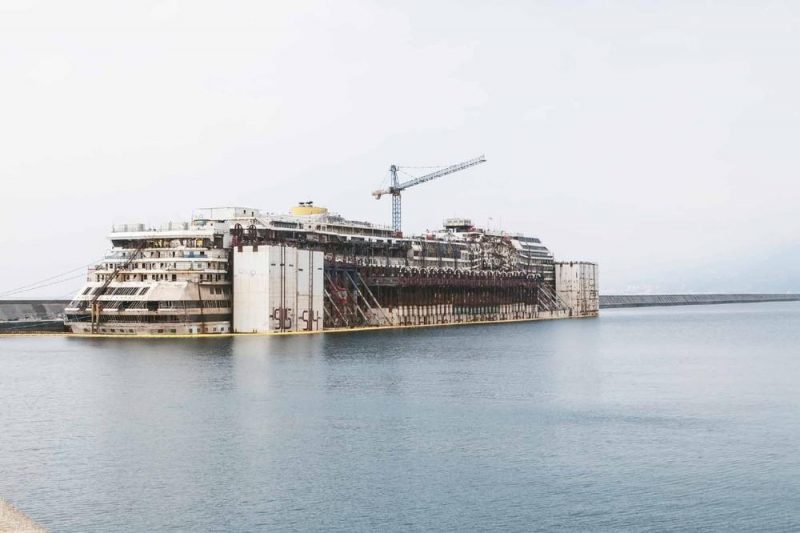 Captain Schettino stated that, before approaching the island, he turned off the alarm system for the ship’s computer navigation system. “I was navigating by sight, because I knew those seabeds well. I had done the move three, four times.” 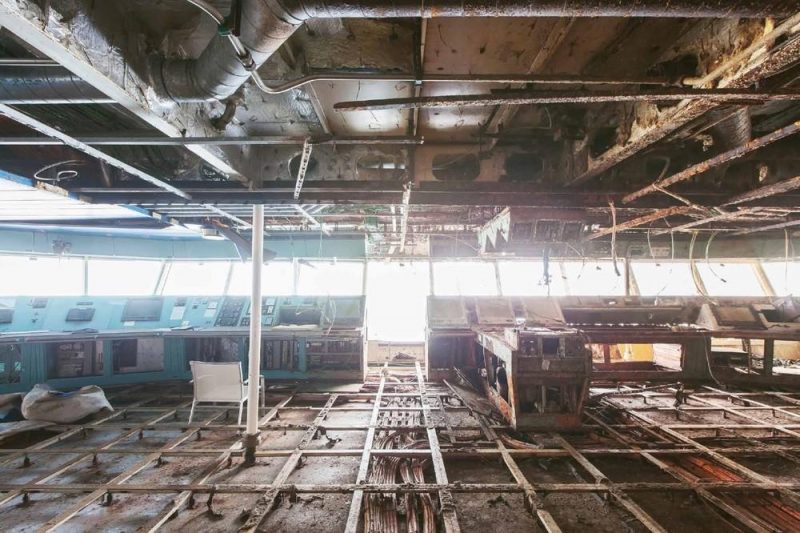 He told investigators that he saw waves breaking on the reef and turned abruptly, swinging the side of the hull into the reef. “I have to take responsibility for the fact that I made a judgment error.””This time I ordered the turn too late.” 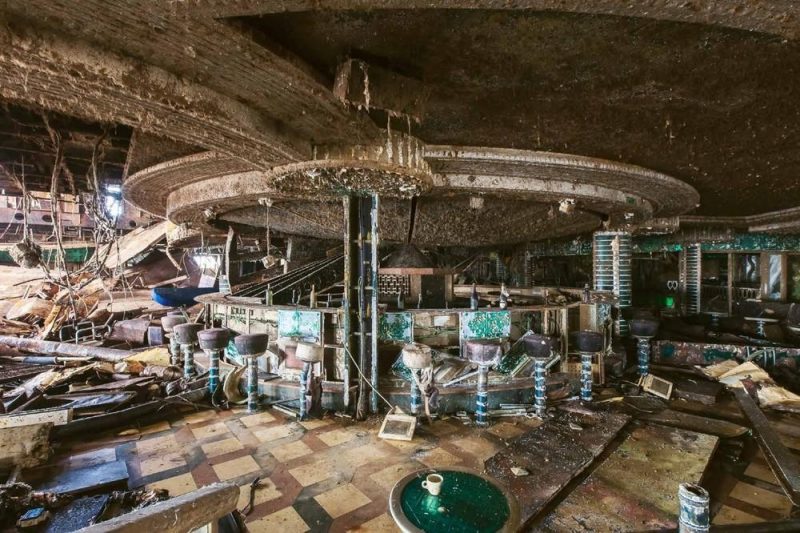 Between 14 and 30 January 2012, rescue divers searched within the ship for missing people. The head of the coast guard diving team described the conditions inside the ship, still perched on a 120 ft ledge, as “disastrous” 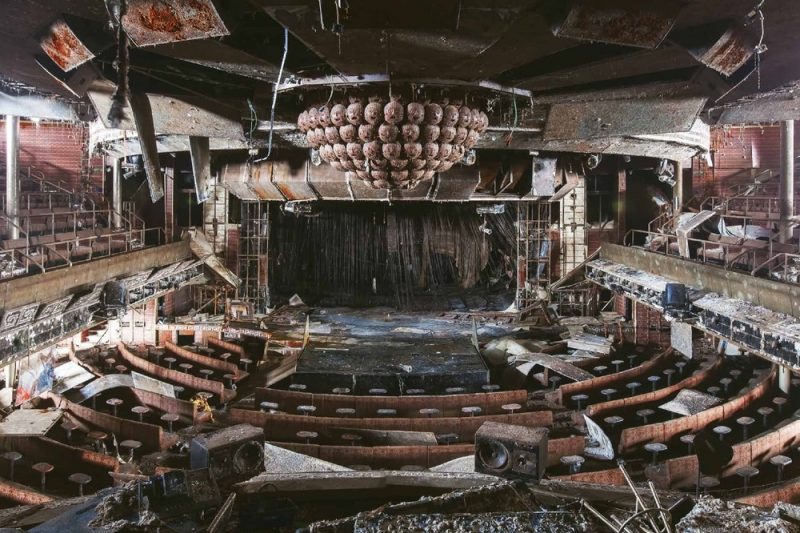 Costa Concordia, is one of the largest ships ever to be abandoned, dominating international media in the days after the disaster. Captain Schettino was arrested on preliminary charges of manslaughter in connection with causing a shipwreck, failing to assist 300 passengers, and failing to be the last to leave the wreck 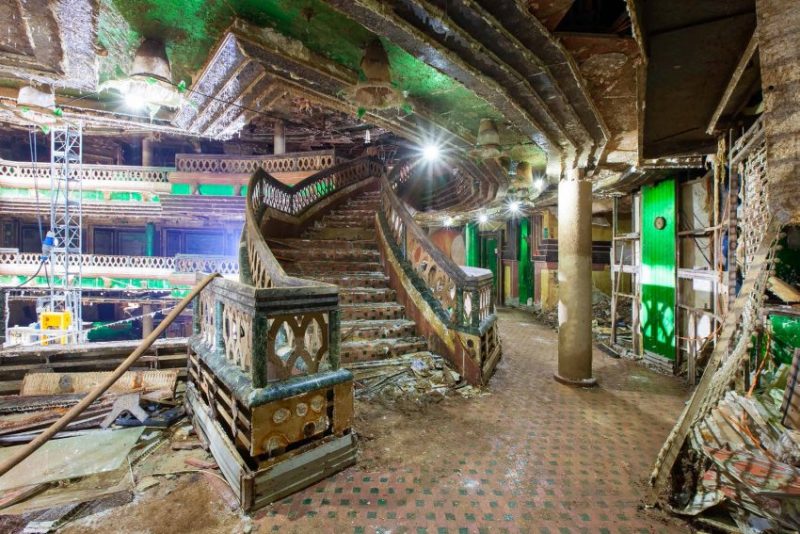 The ship was righted on 17 September 2013, and on 24 October 2013 it was reported that DNA analysis of one body found earlier in the same month confirmed it was the body of missing Italian passenger Maria Grazia Trecarichi. 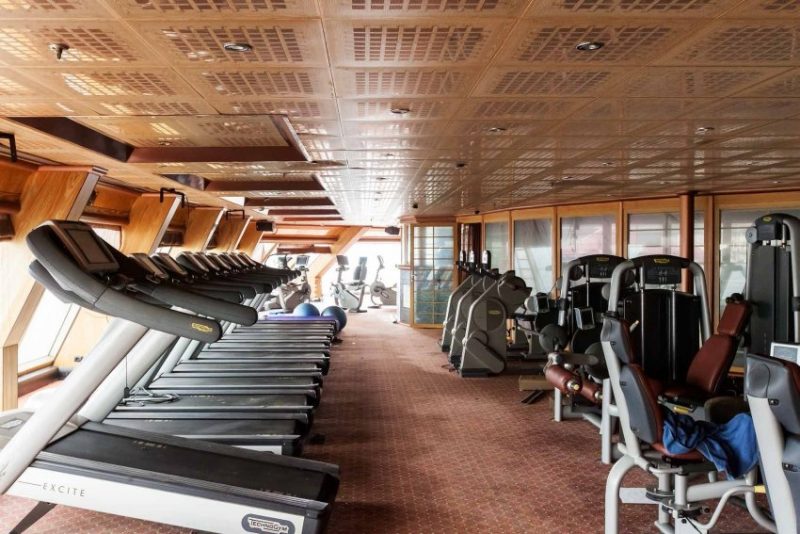 During a six-hour evacuation, most passengers were brought ashore. The search for missing people continued for several months, with all but two being accounted for. 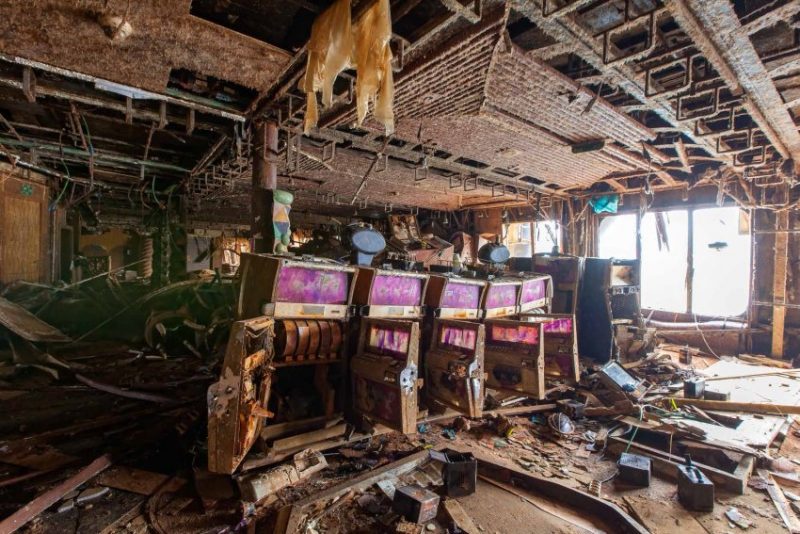 The impact could be heard by passengers on board and caused a temporary power blackout when water flooded the engine room.

Jonathans book is available via www.whitepress.com 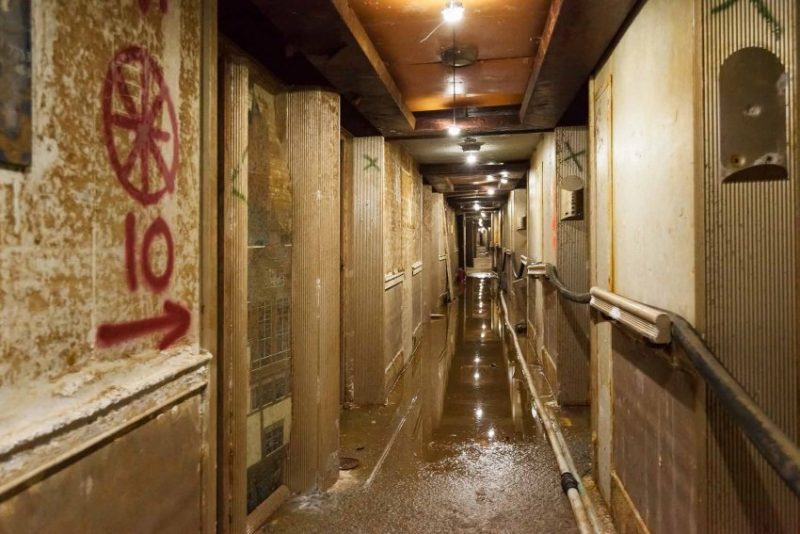 Without power, the ship drifted astern, listing heavily to starboard.

« Christopher Walken read “The Three Little Pigs” & it is total gold
Move over Hollywood: The deadliest gunslingers from the wild west »