A tragic end to such a beautiful ship – the fate of the SS Normandie, world’s greatest passenger liner ever created …

SS Normandie, is one of the relatively few legitimate contenders for the title “Greatest Liner Ever”, was an ocean liner built in Saint-Nazaire, France, for the French Line Compagnie Générale Transatlantique.

The ship would be renamed the USS Lafayette, in honor of the French General who had helped make U.S. independence possible during the revolution. 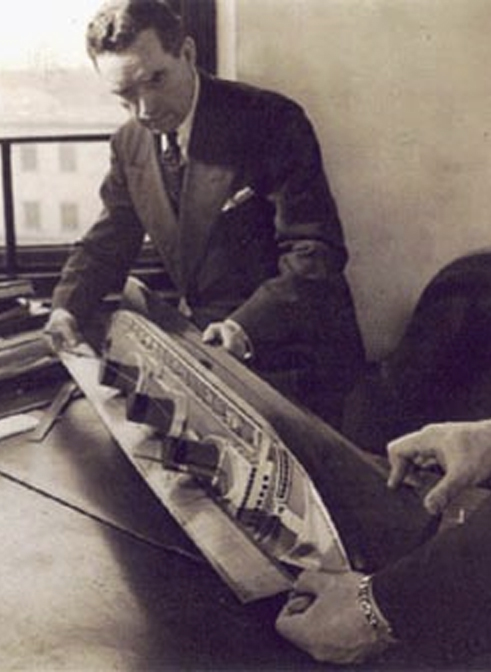 Vladimir Yourkevitch working on the design of SS Normandie. source

The designers intended their superliner to be similar to earlier French Line ships. Then they were approached by Vladimir Yourkevitch, a former naval architect for the Imperial Russian Navy, who had emigrated to France after the revolution.

His ideas included a slanting clipper-like bow and a bulbous forefoot beneath the waterline, in combination with a slim hydrodynamic hull. Yourkevitch’s concepts worked wonderfully in scale models, confirming his design’s performance advantages. The French engineers were impressed and asked Yourkevitch to join their project. 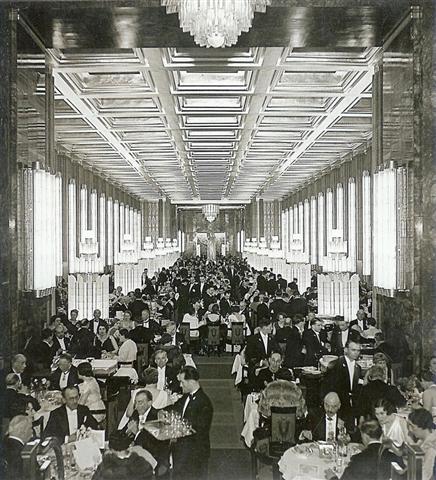 Normandie’s main dining room, decorated with Lalique glass and compared to the Hall of Mirrors at Versailles. source

The luxurious interiors were designed in Art Déco and Streamline Moderne style. Many sculptures and wall paintings made allusions to Normandy, the province of France, after which Normandie was named. 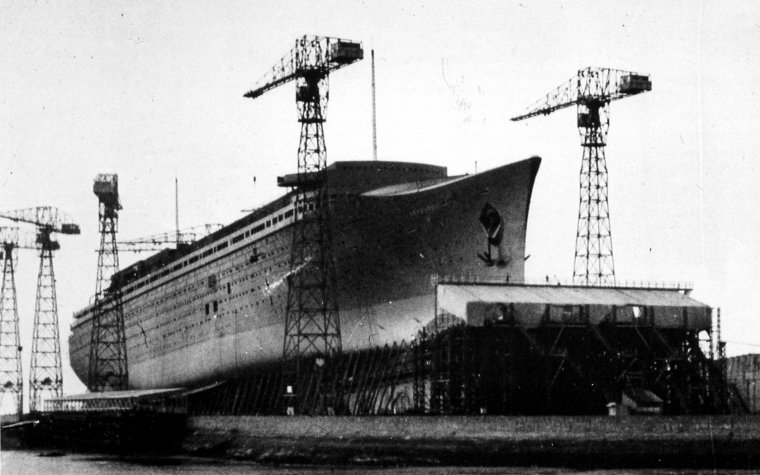 The SS Normandie under construction, prior to her launch. source

On 29 October 1932, Normandie was launched in front of 200,000 spectators. Three years later, in 1935,  she entered service as the largest and fastest passenger ship afloat and she is still the most powerful steam turbo-electric-propelled passenger ship ever built. 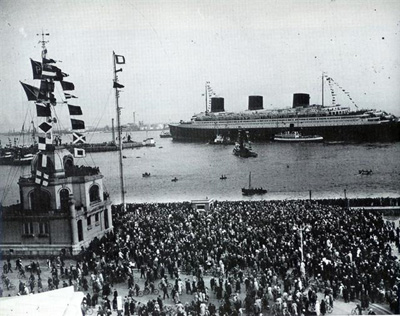 Normandie arrives for the first time at her home port of Le Havre, France, at the start of her record-breaking maiden voyage. source

Normandie’s maiden voyage was on 29 May 1935. Fifty thousand saw her off at Le Havre, on what was hoped would be a record-breaking crossing. Normandie reached New York after four days, three hours and 14 minutes, taking away the Blue Riband (an unofficial accolade given to the passenger liner crossing the Atlantic Ocean westbound in regular service with the record highest speed) from the Italian liner, Rex. 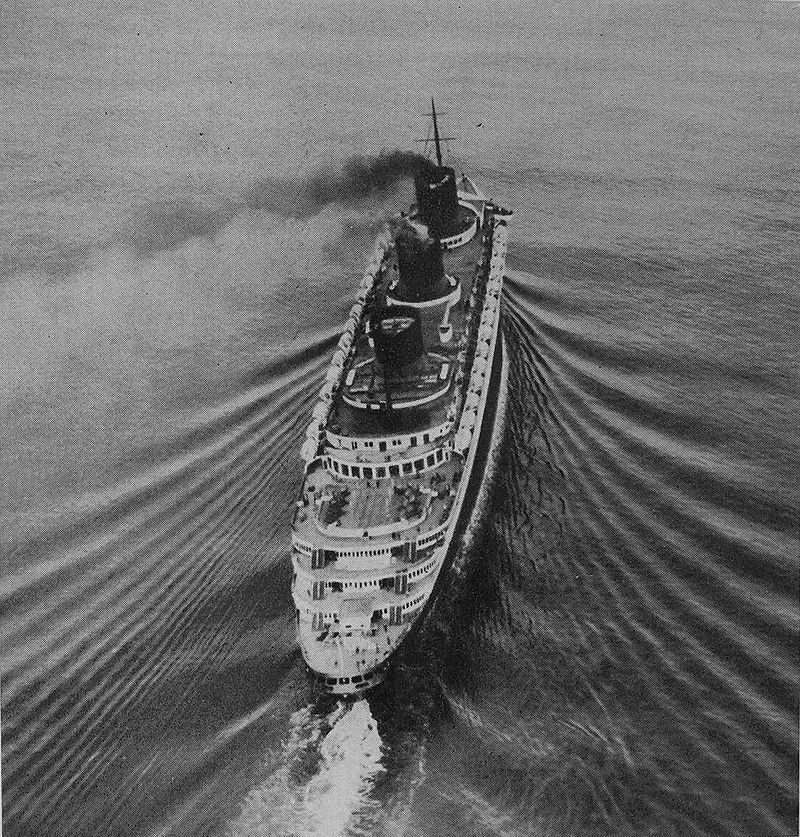 The superiority of Yourkevitch’s hull was visible: hardly a wave was created off the bulbous bow. The ship reached a top speed of 32.125 knots (59.496 km/h) and performed an emergency stop from that speed in 1,700 meters (5,577 ft). source 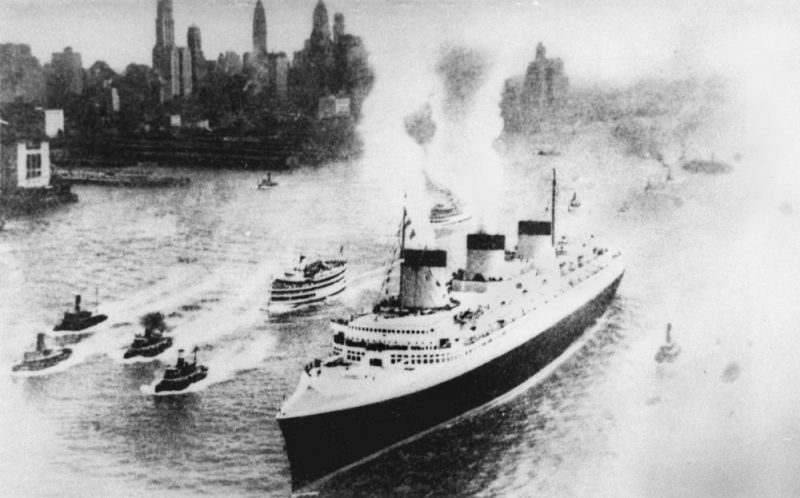 Normandie arriving in New York, at the end of her record – breaking maiden voyage. source 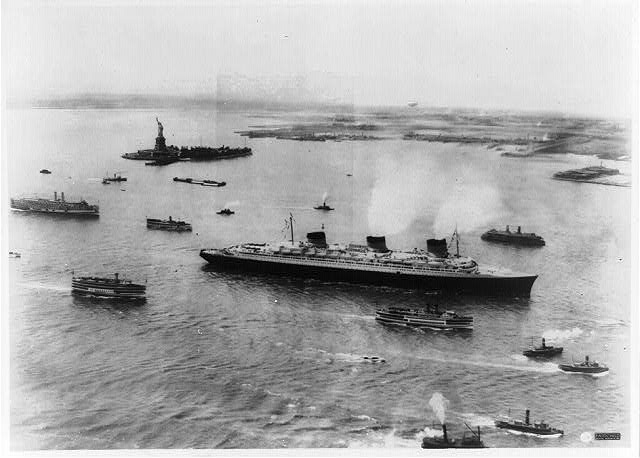 The ship was overhauled during the winter of 1935-36 to correct significant vibration problems which were evident from the time of her maiden voyage.

In the process, her gross tonnage was increased from 79,280 to 83,423. Normandie’s career as a passenger liner was cut short by the outbreak of World War II. At the end of her 139th Atlantic crossing, she arrived in New York on 28 August 1939, and would never sail again. 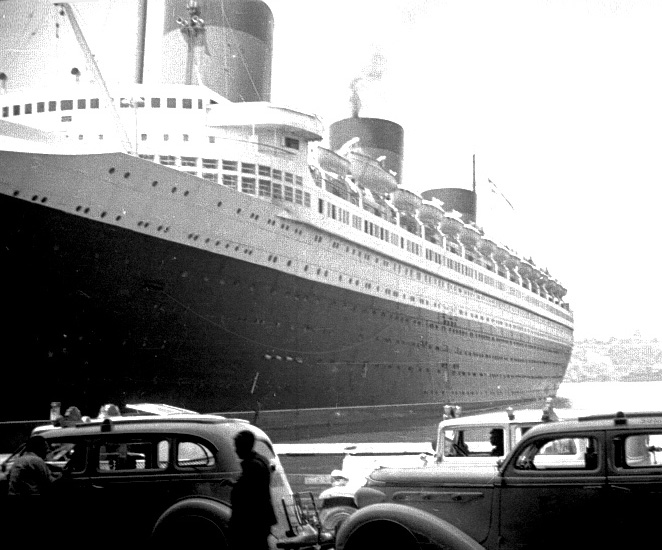 The ship was taken into custody by the U.S. Coast Guard when France was occupied in June 1940, and less than a week after Pearl Harbor, she was taken over by the U.S. Maritime Commission. In January 1942, the U.S. War Department took her over and by 9 February, her conversion into a troopship was nearly completed.

But at 14:30, on 9 February 1942, sparks from a welding torch used by a workman named Clement Derrick ignited a stack of life vests filled with flammable kapok that had been stored in the first-class lounge. The woodwork had not yet been removed, and the fire spread rapidly. The ship had a very efficient fire protection system, but it had been disconnected during the conversion and its internal pumping system was deactivated. 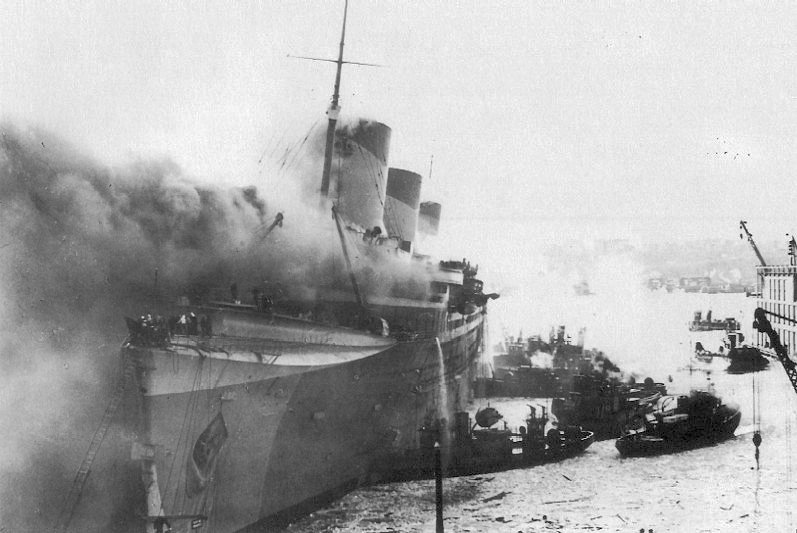 The New York City Fire Department’s hoses did not fit the ship’s French inlets. Before the fire department arrived, approximately 15 minutes after a fire broke out, all on-board crew were using manual means in a vain attempt to stop the blaze.

A strong northwesterly wind blowing over Lafayette’s port quarter swept the blaze forward, eventually involving the three upper decks of the ship within an hour of the start of the conflagration. Capt. Coman, along with Capt. Simmers arrived about 15:25 to see his huge prospective command in flames. 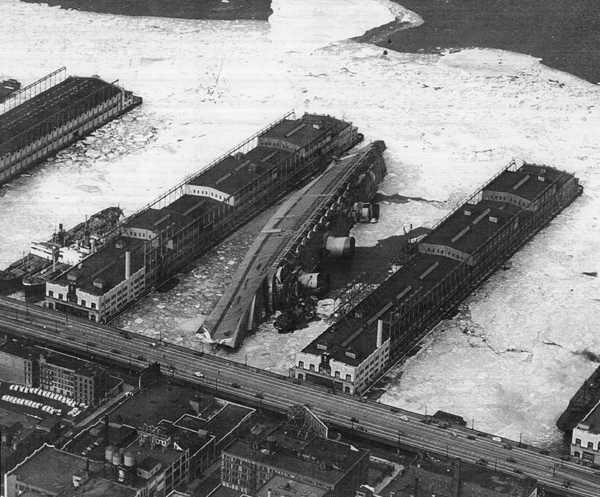 Normandie, renamed USS Lafayette, lies capsized in the frozen mud of her New York Pier the winter of 1942. source

Between 17:45 and 18:00 on 9 February 1942, authorities considered the fire under control, and began winding down operations until 20:00. Shortly after midnight, Rear Adm. Andrews ordered Lafayette abandoned, and the ship continued to list, a process hastened by the 6,000 tons of water that had been hosed on her. New York fire officials were concerned that the fire could spread to the nearby city buildings.

Lafayette eventually capsized during the mid watch (02:45am) on 10 February, nearly crushing a fire boat, and came to rest on her port side at an angle of approximately 80 degrees. 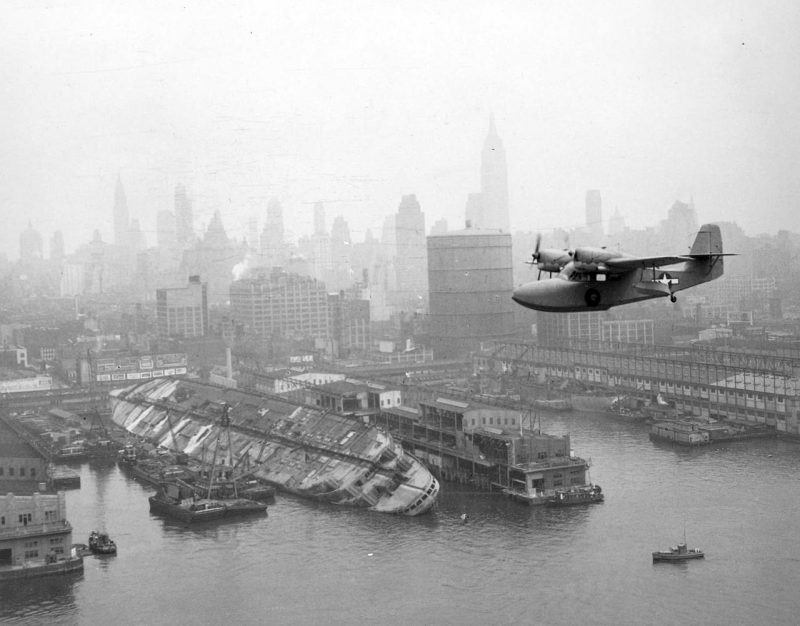 Lafayette was stricken from the Naval Vessel Register on 11 October 1945. President Harry Truman authorized her disposal in an Executive Order on 8 September 1946, and she was sold as scrap on 3 October 1946 to Lipsett, Inc., an American salvage company based in New York City, for US$161,680. 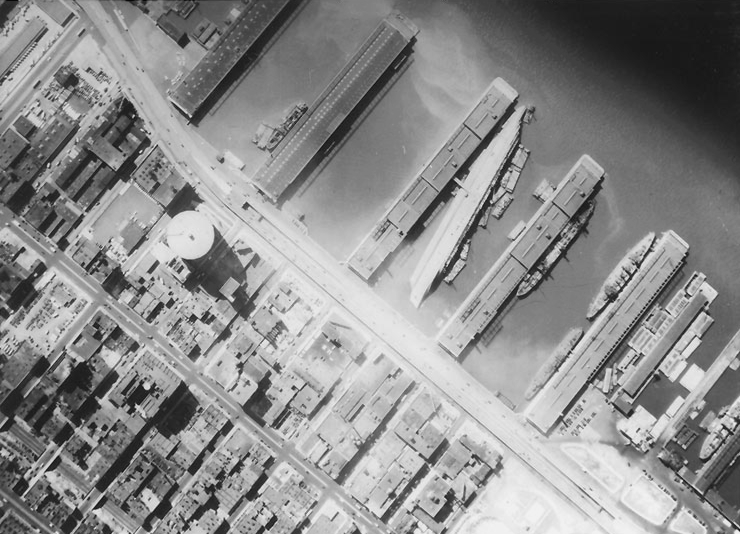 After neither the US Navy nor French Line offered a plan to salvage her, Yourkevitch, the ship’s original designer, proposed to cut the ship down and restore her as a mid-sized liner. This plan also failed to draw backing. She was cut up for scrap beginning in October 1946 at Port Newark, New Jersey, and completely scrapped by 31 December 1948. 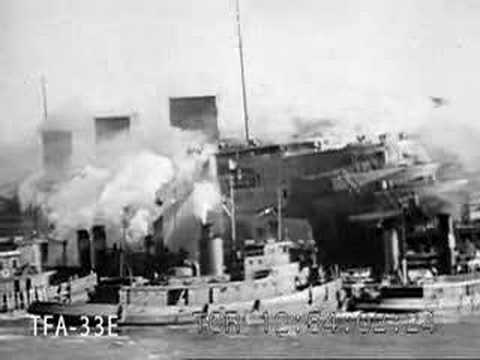