The Mir mine  also called the Mirny mine, is a former open pit diamond mine, now inactive, located in Mirny, Eastern Siberia, Russia. The mine is 525 meters (1,722 ft) deep (4th in the world) and has a diameter of 1,200 m (3,900 ft), and is the second largest excavated hole in the world, after Bingham Canyon Mine.

The diamond-bearing deposits were discovered on June 13, 1955 by Soviet geologists Yuri Khabardin, Ekaterina Elagina and Viktor Avdeenko during the large Amakinsky Expedition in Yakut ASSR. They found traces of the volcanic rock kimberlite, which is usually associated with diamonds. This finding was the second success in the search for kimberlite in Russia, after numerous failed expeditions of the 1940s and 1950s. (The first was Zarnitsa mine, 1954) For this discovery, in 1957 Khabardin was given the Lenin Prize, one of the highest awards in the Soviet Union 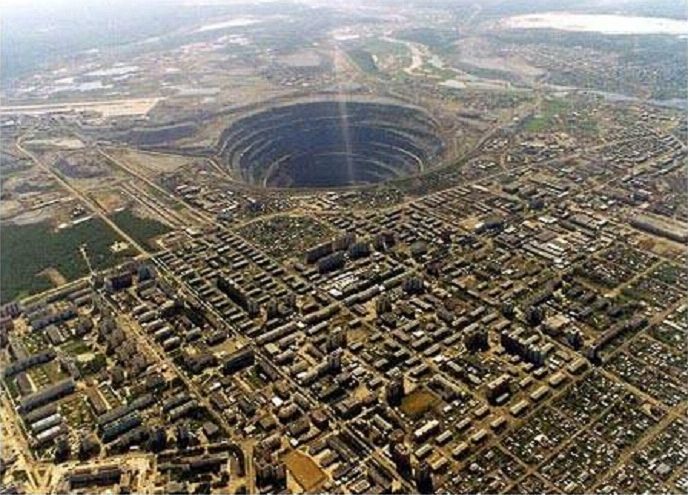 The development of the mine started in 1957, in extremely harsh climate conditions. Seven months of winter per year froze the ground, making it hard to mine. During the brief summer months, the ground turned to slush. Buildings had to be raised on piles, so that they would not sink. The main processing plant had to be built on better ground, found 20 km away from the mine. The winter temperatures were so low that car tires and steel would shatter and oil would freeze. During the winter, workers used jet engines to thaw and dig out the permafrost or blasted it with dynamite to get access to the underlying kimberlite. The entire mine had to be covered at night to prevent the machinery from freezing. 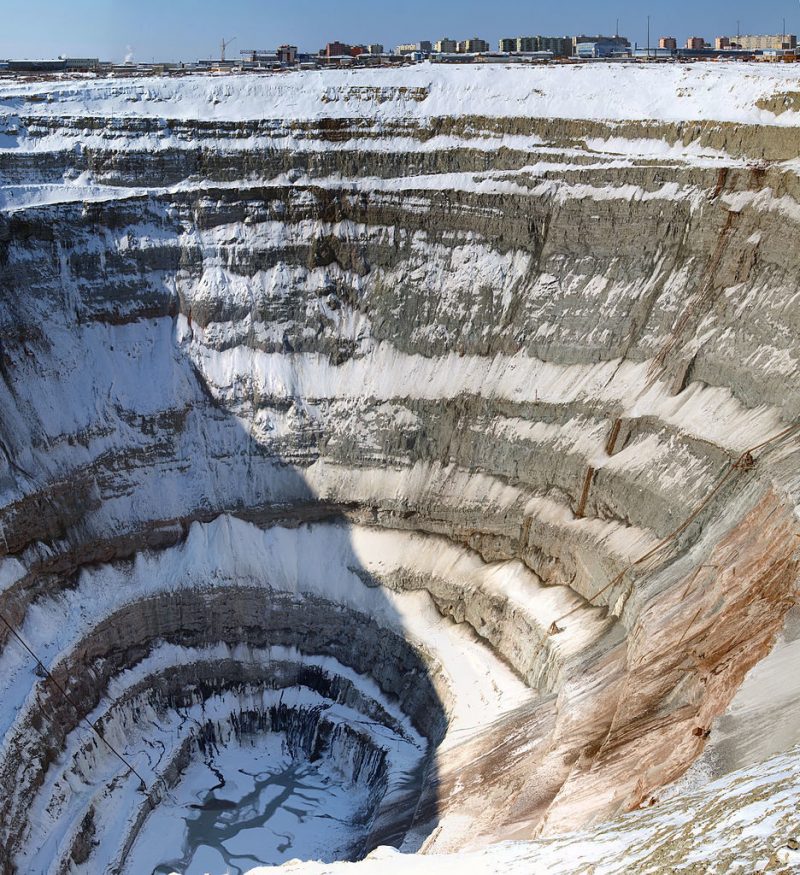 The rapid development of the Mir mine had worried De Beers company, which at that time was distributing most of the world’s diamonds. De Beers had to buy Russian diamonds in order to control the market price, and therefore needed to know as much as possible about the Russian mining developments. In the 1970s, De Beers requested permission to visit the Mir mine. Permission was granted under condition that Russian experts would visit De Beers diamond mines in South Africa. De Beers executive Philip Oppenheimer and chief geologist Barry Hawthorne arrived in Moscow in the summer of 1976. They were intentionally delayed in Moscow by the arrangement of a series of meetings and lavish banquets with Soviet geologists, mineralogists, engineers and mine managers. When Oppenheimer and Hawthorne finally reached the Mir mine, their visas were about to expire, so that they could only have 20 minutes at the Mir mine. Even that short time was sufficient to get some important details. For example, the Russians did not use water during the ore processing at all, which was astonishing to De Beers. The reason was that water would freeze most of the year, and dry crushing was used instead. De Beers also overestimated the size of the mine’s pit. 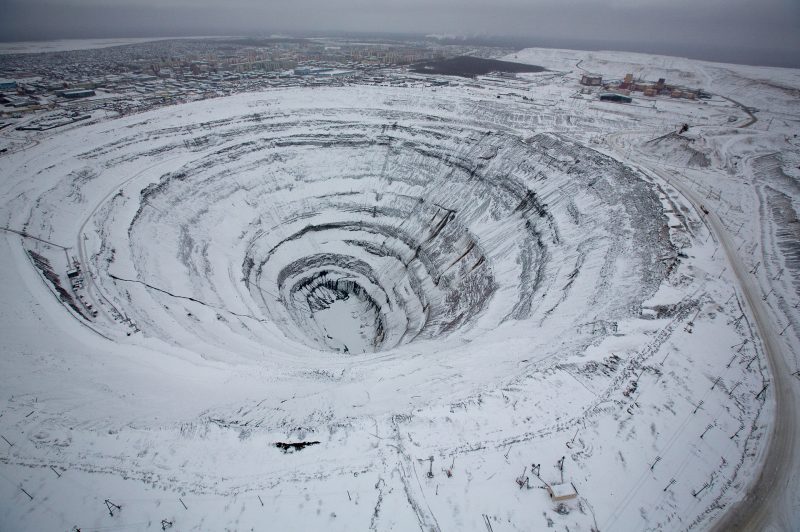 Mirny Mine during winter. Wikimedia Commons

The Mir mine was the first developed and the largest diamond mine in the Soviet Union.Its surface operation lasted 44 years, finally closing in June 2001. After the collapse of the USSR, in the 1990s, the mine was operated by the Sakha diamond company, which reported annual profits in excess of $600 million from diamond sales. 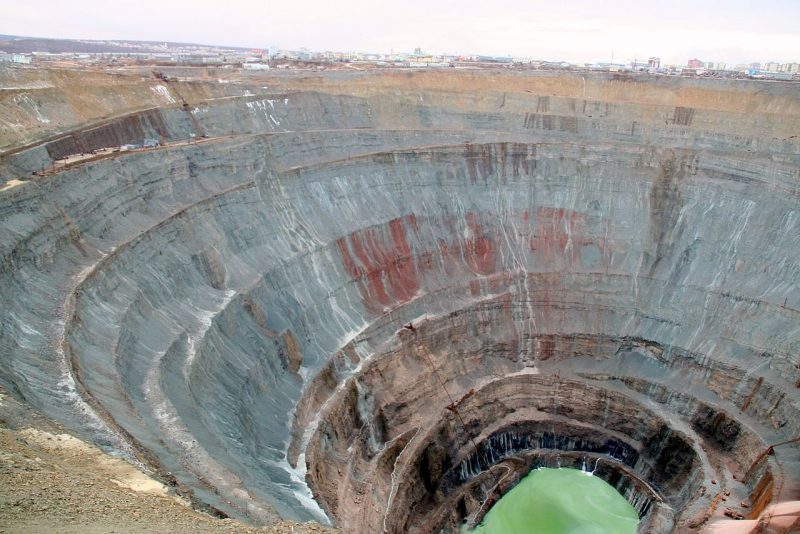 The open pit diamond mine of Mirny in Yakutia. Its depth is 525 meter.

Later, the mine was operated by Alrosa, the largest diamond producing company in Russia, and employed 3,600 workers. It had long been anticipated that the recovery of diamonds by conventional surface mining would end. Therefore, in the 1970s construction of a network of tunnels for underground diamond recovery began. By 1999, the project operated exclusively as an underground mine. In order to stabilize the abandoned surface main pit, its bottom was covered by a rubble layer 45 meters thick. After underground operations began, the project had a mine life estimate of 27 years, based on a drilling exploration program to a depth of 1,220 meters. The Mir mine was permanently closed in 2004

« Medal of Honor: To save his men he went & took on 200 Germans himself & won
World’s first experimental self-propelled vehicle was built in 1769 »