After it was flooded in 1972, the ghost town of Daniels lives as a collection of memories

The original settlement that would become the town of Daniels formed in 1810 when the family of Thomas Ely came to the area and built a textile mill. The community around the mill was known as Elysville. In 1853 the town was purchased by the family of James S. Gary and renamed to Alberton in honor of James’s son Albert. The factory remained with the Gary family until 1940 when the Daniels Company bought the entire village of 500 acres for $65,000 and changed its name to Daniels. The ruins of the Saint Stanislaus Kostka Catholic Church. The church was built in the 1800s and stood until it was struck by fire and burned in September of 1926. Source In 1968, the town’s owner, the C.R. Daniels Company, gave notice to the remaining residents that it would close all housing within a few years. Source

In 1968, the 90 families who resided there for several years were given a notice to move, as the textile mill would be closing and town housing would be terminated. History would prove this decision to be wise. In June of 1972, tropical storm Agnes rolled through the Patapsco River Valley and destroyed most of the remaining empty buildings in Daniels. After it was flooded, the town was completely abandoned.

Now a ghost town of stone ruins and rotting cars left where the flood waters carried them. What was once home to 90 families is now a barren, almost apocalyptic wasteland. On June 21, 1972, Hurricane Agnes struck and washed what remained of Daniels into history. A couple of derelict cars now rot in the churchyard. Source

Most of the town is gone today, but certainly not forgotten. Daniels Mill was added to the National Register of Historic Places in 1979 and the Daniels Band helps preserve the heritage of the town, and each year a Daniels reunion is held to share the memories. 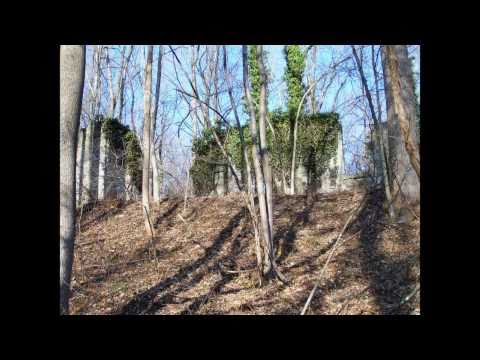