On April the 26th, early in the morning as the sunlight reached the earth,  The Draken Harald Hårfagre, the largest replica Viking longship left her home port in Haugesund, Norway, and sailed off for a great challenge across the North Atlantic Ocean.

The Draken Harald Hårfagre or the  Dragon Harald Fairhair was named after the first King of Norway it is the largest Viking ship built in modern times. The ship brings the seafaring qualities of a warship from the old Norse sagas to life, it is a ship that combines ocean-crossing sailing capabilities with a warship’s use of oars. The aim  of the journey is to explore and relive one of the most mythological sea voyages – the first transatlantic crossing, and the Viking discovery of the New World more than a thousand years ago. So the modern Vikings will retrace the steps of the great explorers Erik the Red  and his son Leif Erikson (the first Europeans to cross the Atlantic Ocean and arrive on the American continent). Construction of the vessel began in 2010, sponsored by the Norwegian businessman Sigurd Aase. The launching of the longship took place in summer 2012. Because no one today has real experience handling a Viking ship of this size, the initial period will be one of exploring how to sail and row the ship, and for experimentation with the rigging along the coast of Norway. In summer 2014 the longship made its first real expedition from Norway to Liverpool’s Victoria Rowing Club. The Dragon Harald Fairhair is 35 metres (115 ft) long with a beam of approximately 8 metres (26 ft) and a displacement of about 95 metric tonnes. The longship is constructed in oak and carries 260 square metres (2,800 sq ft) of sail.In the Viking age, attacks carried out from the ocean was in the form of a “Strandhogg”, i.e. hit and run tactics, being highly mobile. By the High Middle Ages, the ships changed shapes to become larger and heavier with platforms in the front and back. This was done for the sake of sea battles, that made it possible to board ships that lay alongside each other. In the 13th century, this tactic was well known and widely used in Scandinavia. The law of the land in those days included standards that required Norwegian provinces (fylker) to cooperate in supplying 116 such warships of 50 oars size  (25 pairs of oars) for duty in the Norwegian fleet of warships. Copies of Viking ships are usually based on interpretations of the archaeological material. But in the construction of the Dragon Harald Fairhair an alternative method has been used. It was decided to begin with the living tradition of Norwegian boat building, with roots that can be traced directly to the Viking Age.  The foremost Norwegian traditional boat builders are involved in the project. Their knowledge of traditional boatbuilding is supplemented with the results of investigations carried out on the archaeological evidence, source material in  Norse literature, literature from the same period from foreign sources, iconographic material, etc. The goal of the project is to recreate in this manner an oceangoing warship of 50 oars taken right out of the Norse Sagas. The  North Atlantic expedition is very ambitions. A crew of 32-darring and damn hardy men and women were selected from a whopping number of 4,000 applicants. Along with the captain  Björn Ahlander the modern Vikings have embarked on a 6,000 miles voyage   that will take them to  historical Viking settlements at Shetland, Faroe Islands, Iceland and Greenland through the iceberg fields of the North Atlantic to Newfoundland to Quebec City, Toronto and finally via The Great Lakes into The United States. The project will create cross-border meetings and inspire people to go beyond the horizon in a modern Viking saga. Sailing the traditional route, upon reaching the American continent, Expedition America 2016 will visit ports in Canada and  the USA. 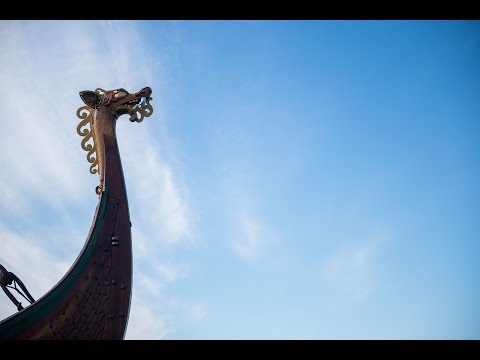 To explore more about their journey  go to their official site or their facebook page.

« Detecting enemy aircraft before the invention of Radar- Weird examples show acoustic locators of the past
A sculptor trained 22 ash trees to grow in a circle, the secret artwork is called “Ash Dome” »