In the Italian-set Roman Holiday (1953), Hepburn had her first starring role as Princess Anne,  but she was not the first choice for the part.

William Wyle had initially considered Elizabeth Taylor and Jean Simmons for this role, but they were both unavailable. Wyler was very excited to find Hepburn, but he didn’t choose her until after a screen test. Wyler wasn’t able to stay and film this himself but told the assistant director to ask the cameraman and the soundman to continue recording after the assistant director said “cut” so that she would be seen in a relaxed state after having performed a dignified, subdued scene from the film.The candid footage won her the role; some of it was later included in the original theatrical trailer for the film, along with additional screen test footage showing Hepburn trying on some of Anya’s costumes and even cutting her own hair (referring to a scene in the film).

Wyler later commented, “She had everything I was looking for: charm, innocence, and talent. She also was very funny. She was absolutely enchanting and we said, ‘That’s the girl!'”

Enchanting she is, indeed! Take a look! 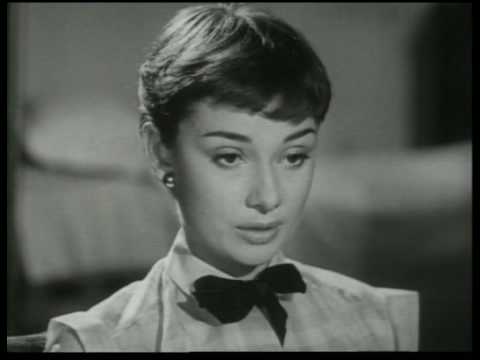 Roman Holiday was not Hepburn’s first American acting job—she appeared on a 1952 CBS Television Workshop production of Rainy Day in Paradise Junction—but it was her first major role, one which introduced her to the general public.

Although she is not precisely a newcomer to films Audrey Hepburn, the British actress who is being starred for the first time as Princess Anne, is a slender, elfin and wistful beauty, alternately regal and childlike in her profound appreciation of newly-found, simple pleasures and love. Although she bravely smiles her acknowledgement of the end of that affair, she remains a pitifully lonely figure facing a stuffy future.

Hepburn was signed to a seven-picture contract with Paramount with 12 months in between films to allow her time for stage work  while spawning what became known as the Audrey Hepburn “look” after her illustration was placed on 7 September 1953 cover of TIME magazine.

Following her success in Roman Holiday, she starred in Billy Wilder’s romantic Cinderella-story comedy Sabrina (1954), in which wealthy brothers (Humphrey Bogart and William Holden) compete for the affections of their chauffeur’s innocent daughter (Hepburn). For her performance, she was nominated for the 1954 Academy Award for Best Actress while winning the BAFTA Award for Best Actress in a Leading Role the same year. Bosley Crowther of The New York Times wrote:

One might guess this is Miss Hepburn’s picture, since she has the title role and has come to it trailing her triumphs from last year’s “Roman Holiday”. And, indeed, she is wonderful in it—a young lady of extraordinary range of sensitive and moving expressions within such a frail and slender frame. She is even more luminous as the daughter and pet of the servants’ hall than she was as a princess last year, and no more than that can be said.

She began another collaboration that year, this time with actor Mel Ferrer, starred in the fantasy play Ondine on Broadway. With her lithe and lean frame, Hepburn made a convincing water spirit named Ondine in this sad story about love found and lost with a human (Ferrer). A New York Times critic commented:

Somehow Miss Hepburn is able to translate [its intangibles] into the language of the theatre without artfulness or precociousness. She gives a pulsing performance that is all grace and enchantment, disciplined by an instinct for the realities of the stage.