Not every bridge is huge, important and famous as the Golden Gate Bridge or the Brooklyn Bridge, but it doesn’t mean that if you are just a small road bridge, you don’t deserve attention. This is a story about the oldest road bridge, and also the oldest stone arch bridge in America. Jason Sherman, a film-maker, felt that it is his obligation to tell it to the people.

It all begins with an Indian trail used long before the European settlers arrived on the continent. Later it became a road on which people like William Penn and George Washington. Today, part of it is a busy asphalt road called Frankford Avenue, but 300 hundred years ago it was known as the King’s Highway.

This is the oldest road in Pennsylvania and its trademark is one of the oldest still-functioning road bridges in the country. Sherman says: “People know about Independence Hall, the signing of the Declaration, and the Liberty Bell, but when I tell them that the ‘oldest this’ or ‘first that’ is here in Northeast Philly, they don’t know about that.”

That is why he started filming “The King’s Highway.” His goal is to change this situation. He wants to bring more attention on the history of Northeast Philly and try to prevent the ongoing demolition of the remaining old structures along the highway. He got interested in the King’s Highway after he read a newspaper article about it. The subject caught his attention and after some research, he was even more fascinated. He decided to spread the story. The base and the arch of the bridge / Source Jack E. Boucher, Library of Congress

The king’s Highway is covering 1,300 miles. It was made between 1650 and 1735 by the order of  Charles II of England. The idea was to offer people faster and better trade route by connecting Charleston, S.C., and Boston

Philadelphia owns about 12 miles of the King’s Highway, but a lot of interesting thighs have happened on this short distance. The King’s Highway in Philadelphia begins where Frankford Avenue meets Delaware Avenue, near SugarHouse Casino, then heads north until it reaches Poquessing Creek, which forms part of the boundary with Bucks County.

A major and important landmark here is the “Frankford Avenue Bridge”, also called “Pennypack Creek Bridge.” This stone road bridge takes Frankford Avenue over Pennypack Creek in the Holmesburg section of the city. The bridge was constructed in 1697 by the request of William Penn. His idea was rather personal; he wanted to connect his mansion (it was located in present-day Falls Township), with the thriving city of Philadelphia. 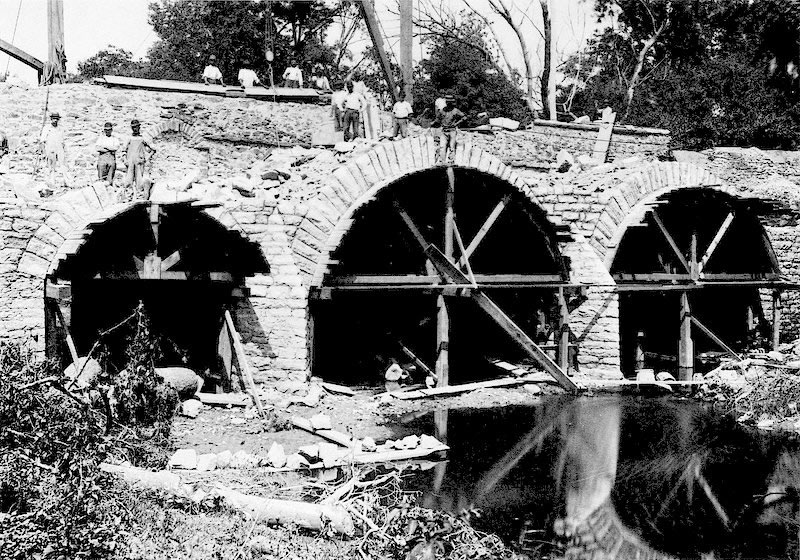 Many important events from early American history are connected with this bridge. In 1774, John Adams and other delegates from Massachusetts were coming to Philadelphia  for the First Continental Congress. On their way, near the bridge (in Frankford), they were met by physician Benjamin Rush and merchant Thomas Mifflin. According to Adams, this was an important meeting that maybe defined the whole policy of the United States.

In another instance, Soldiers of the Continental Army marched across the bridge on their way for the battle of Yorktown. They made a decisive victory against the enemy. Another important figure passed the bridge 1789. Washington crossed it while he was on his way for the first presidential inauguration.

Today, the bridge is used by up to 17.000 cars a day. Fred Moore from the Northeast Philadelphia History Network says that although the bridge is very old, it is still serving the people as it was intended.

According to Moore, Northeast Philadelphia’s rich and amusing history deserves more attention, but the problem is that not a lot of tourists can be attracted because there aren’t many things to look at there. Nobody will come there from Center City just to see a bridge.

Some of the oldest buildings along the King’s Highway are religious institutions. Pennepack Baptist Church in Bustleton, for example, is founded in 1688 and it is the oldest Baptist church in Pennsylvania. Another interesting building is Byberry Friends Meeting House, built in 1683.  Debbie Klak of the Frankford Historical Society said that  the only way of  making this road interesting and alive again is to dig into the things that happen on that road across history. She compares it with a battlefield that maybe looks just like a plain field, but there is a big story behind it, a story which can be very entertaining.

« Taken in 1826, “View from the Window at Le Gras” is the world’s first photograph
The Lewis chessmen – The12th-century chess pieces, discovered in 1831 in Scotland and the enigma behind them »