Taken in 1826, “View from the Window at Le Gras” is the world’s first photograph

Nowadays, when we randomly scroll through photos of people’s lunches in HD quality, it really amazes us to see the oldest surviving photograph made almost 200 years ago.

View from the Window at Le Gras is a heliographic image and the oldest surviving camera photograph. It was created by Nicéphore Niépce in 1826 or 1827 at Saint-Loup-de-Varennes, France, and shows parts of the buildings and surrounding countryside of his estate, Le Gras, as seen from a high window.

Niépce captured the scene with a camera obscura focused onto a 16.2 cm × 20.2 cm (6.4 in × 8.0 in) pewter plate thinly coated with Bitumen of Judea, a naturally occurring asphalt. The bitumen hardened in the brightly lit areas, but in the dimly lit areas it remained soluble and could be washed away with a mixture of oil of lavender and white petroleum.

A very long exposure in the camera was required. Sunlight strikes the buildings on opposite sides, suggesting an exposure that lasted about eight hours, which has become the traditional estimate. A researcher who studied Niépce’s notes and recreated his processes found that the exposure must have continued for several days. In late 1827, Niépce visited England. He showed this and several other specimens of his work to botanical illustrator Francis Bauer. View from the Window at Le Gras was the only example of a camera photograph; the rest were contact-exposed copies of artwork.

Bauer encouraged him to present his “heliography” process to the Royal Society. Niépce wrote and submitted a paper but was unwilling to reveal any specific details in it, so the Royal Society rejected it based on a rule that prohibited presentations about undisclosed secret processes. Before returning to France, Niépce gave his paper and the specimens to Bauer. Niépce died suddenly in 1833. 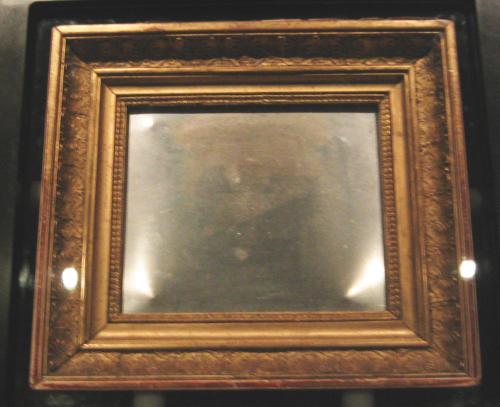 The original plate on display at the Ransom Center in 2004. The visibility of the image depends on the viewing angle, which is far from optimal here, but with the enhanced version as a guide the major elements of the scene can just be discerned.Source

After the pioneering photographic processes of Louis Daguerre and Henry Fox Talbot were publicly announced in January 1839, Bauer championed Niépce’s right to be acknowledged as the first inventor of a process for making permanent photographs. On March 9, 1839, the specimens were finally exhibited at the Royal Society. After Bauer’s death in 1840 they passed through several hands and were occasionally exhibited as historical curiosities. View from the Window at Le Gras was last seen in 1905 and then fell into oblivion.

Historian Helmut Gernsheim tracked down the photograph in 1952 and brought it to prominence, reinforcing the claim that Niépce is the inventor of photography. He had an expert at the Kodak Research Laboratory make a modern photographic copy, but it proved extremely difficult to produce an adequate representation of all that could be seen when inspecting the actual plate.

Gernsheim heavily retouched one of the copy prints to clean it up and make the scene more comprehensible, and until the late 1970s he allowed only that enhanced version to be published. It was apparently at some time after the 1952 copying that the plate acquired disfiguring bumps near three of its corners, causing light to reflect in ways that interfere with the visibility of those areas and of the image as a whole.

During the 1950s and early 1960s, Gernsheim lent the photograph to several exhibitions in continental Europe.In 1963, Harry Ransom purchased most of Gernsheim’s photography collection for the University of Texas at Austin. The Niépce heliograph was not included in the sale, but shortly afterward Gernsheim donated it. Although it has rarely traveled since then, in 2012–13 it visited Mannheim, Germany, as part of an exhibition entitled The Birth of Photography—Highlights of the Helmut Gernsheim Collection. It is normally on display in the main lobby of the Harry Ransom Humanities Research Center in Austin, Texas