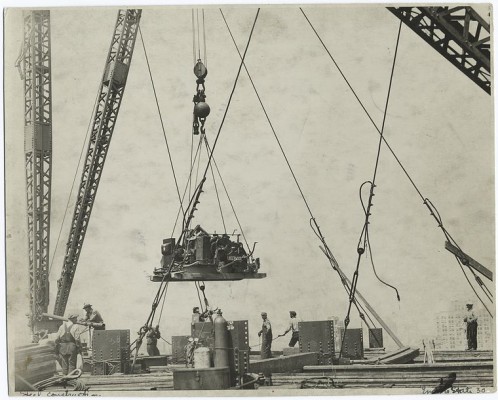 During the incredible building boom of early 20th century, it was said that crew foremen could expect one man to die for every $1million spent on a skyscraper. In these heady early years – when industry barons raced each other to see who could get their towers built first – workers had few protections. They wore no hard hats or safety ropes. But even inches from peril, some men managed to laugh in the face of death. These incredible pictures show construction workers goofing off as they built the Empire State Building

The incredible gallery below was made available by the New York Public Library. It showcases the amazing work of photographer Lewis Wickes Hine (1874-1940), a pioneering social photographer. All of the images below were taken in 1931 during the construction of the Empire State Building. Many of the images may give you chills as the workers traverse steal beams unsecured with no harnesses.

The stunts are no laughing matter. Five men died in accidents during the breakneck construction of the Empire State Building. An estimated 27 workers perished during the construction of the Brooklyn Bridge, which was completed in 1883.  ‘Building skyscrapers is the nearest peace-time equivalent of war. In fact, the analogy is startling, even to the occasional grim reality of a building accident where maimed bodies, and even death, remind us that we are fighting a war of construction against the forces of nature,’ work foreman William Starrette was quoted as saying. 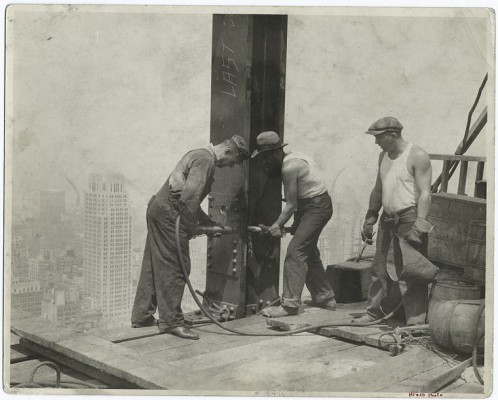 The project involved 3,400 workers, mostly immigrants from Europe, along with hundreds of Mohawk iron workers, many from the Kahnawake reserve near Montreal source According to official accounts, five workers died during the construction source 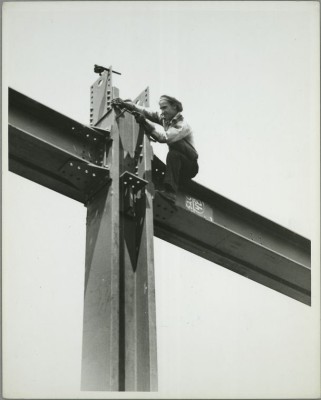 Governor Smith’s grandchildren cut the ribbon on May 1, 1931. Lewis Wickes Hine’s photography of the construction provides not only invaluable documentation of the construction, but also a glimpse into common day life of workers in that era source 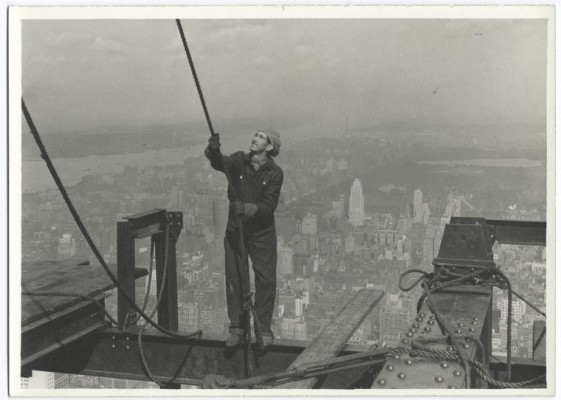 The construction was part of an intense competition in New York for the title of “world’s tallest building”. Two other projects fighting for the title, 40 Wall Street and the Chrysler Building source 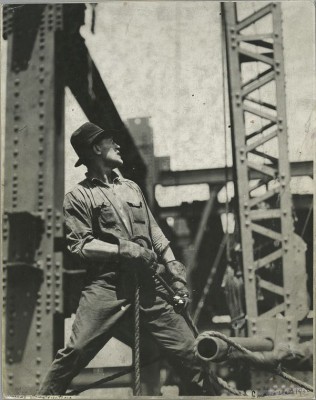 The building was officially opened on May 1, 1931 in dramatic fashion, when United States President Herbert Hoover turned on the building’s lights with the push of a button from Washington source

The Empire State Building is generally thought of as an American cultural icon. It is designed in the distinctive Art Deco style and has been named as one of the Seven Wonders of the Modern World by the American Society of Civil Engineers. The building and its street floor interior are designated landmarks of the New York City Landmarks Preservation Commission, and confirmed by the New York City Board of Estimate. It was designated as a National Historic Landmark in 1986. In 2007, it was ranked number one on the AIA’s List of America’s Favorite Architecture. 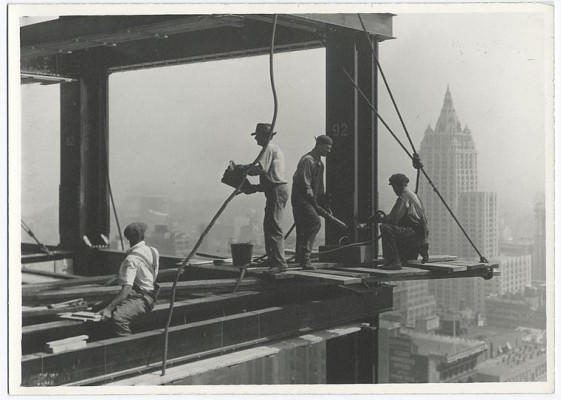 In the riveting gang, the heater fired the rivets in a portable, coal-burning forge until they were red-hot source 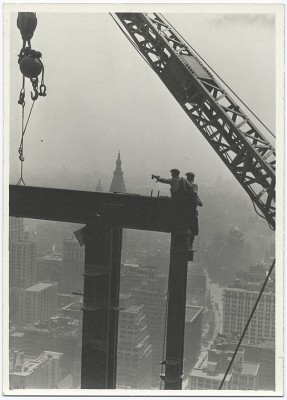 The building’s opening coincided with the Great Depression in the United States, and as a result much of its office space was initially unrented source 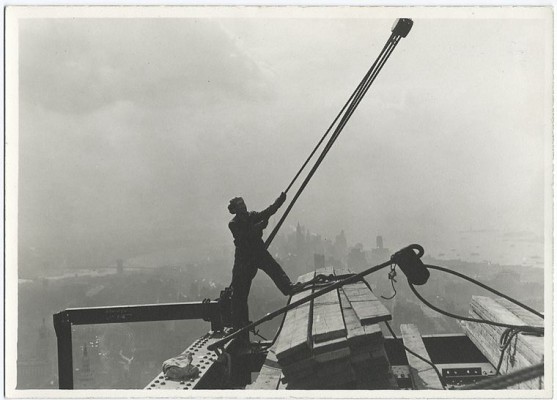 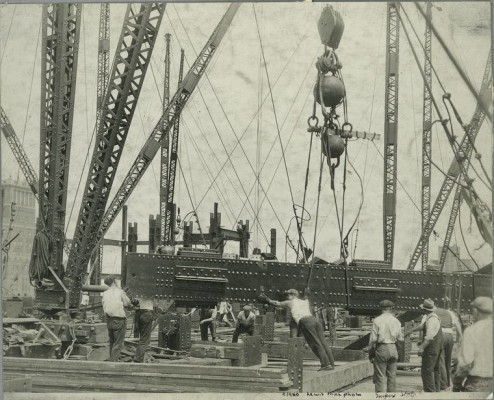 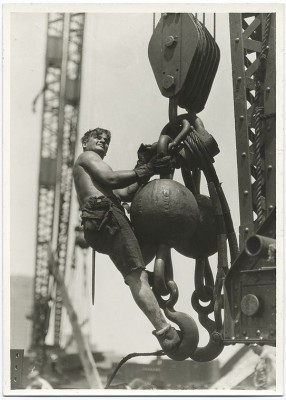 Hanging in: Workmen had near fear of swinging high above the city – with nothing by a few ropes and chains between them and oblivion source

The site of the Empire State Building was first developed as the John Thompson Farm in the late 18th century. At the time, a stream ran across the site, emptying into Sunfish Pond, located a block away. Beginning in the late 19th century, the block was occupied by the Waldorf-Astoria Hotel, frequented by The Four Hundred, the social elite of New York. 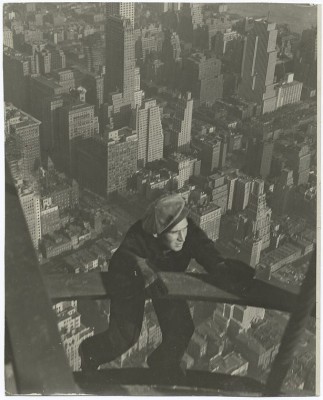 A magazine reporter who wrote about the high-flying construction workers in 1908 – at the start of the skyscraper boom – dubbed the men ‘cowboys of the skies.’ source 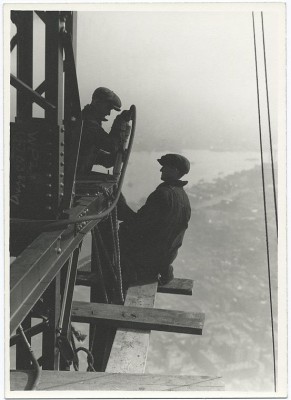 Ernest Poole recalled several examples of men being killed while just going about their daily jobs – being blown off girders by high winds, losing their footing and slipping to their deaths, being smashed by steel as it was being hoisted hundreds of feet into place.source 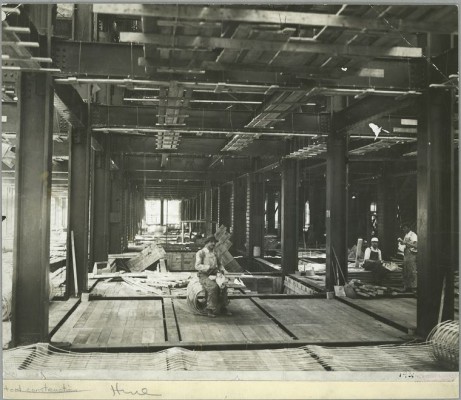 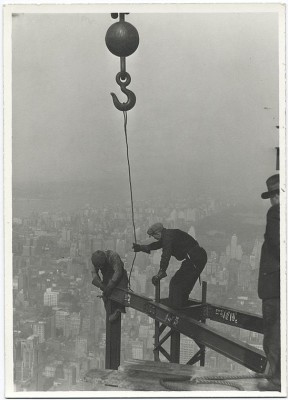 During the early era of skyscraper construction, it was said that one worker died for every $1million spent on the building source 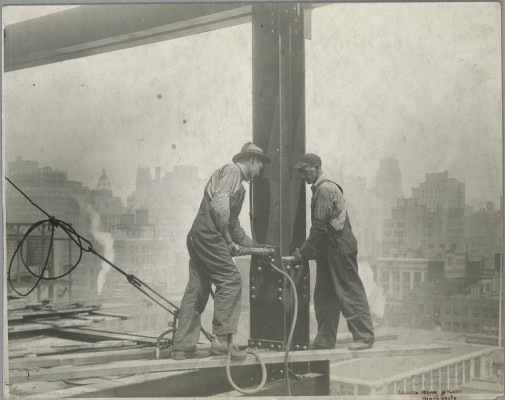 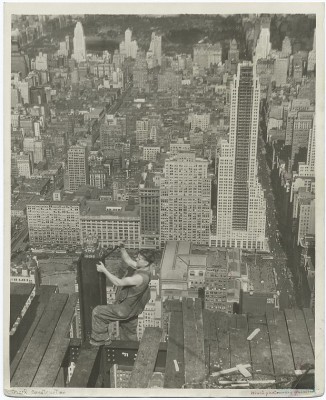 No safety nets or harnesses source 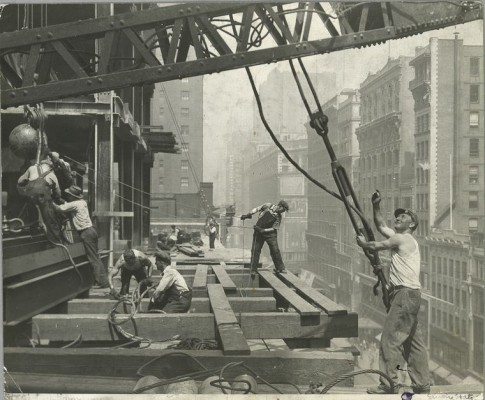 The Empire State Building is generally thought of as an American cultural icon. It is designed in the distinctive Art Deco style and has been named as one of the Seven Wonders of the Modern World source 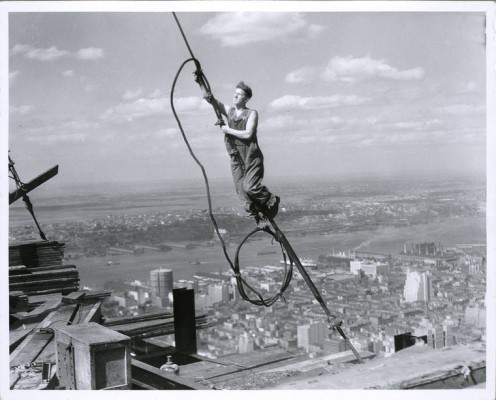 Excavation of the site began on January 22, 1930, and construction on the building itself started on March 17 source 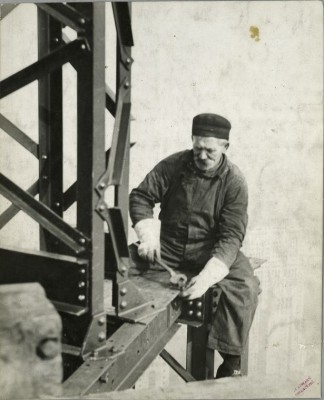 A worker bolts beams during construction; the Chrysler Building can be seen in the background. source