Seikilos epitaph is the oldest surviving complete song in the world

While you live, shine

have no grief at all

life exists only for a short while

and time demands an end.

If you wonder what is this, wonder no more, because what you see above is where it all started, music-wise. It will be redundant to write about where the music industry is right now, we are all aware of it. What we want to talk about is how it all started, and it all started in Ancient Greece. 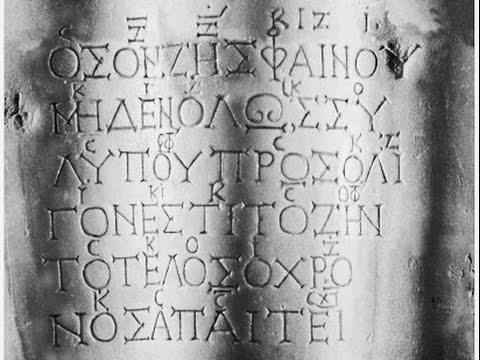 The Seikilos epitaph is the oldest surviving complete musical composition, including musical notation, from anywhere in the world. The epitaph has been dated variously from around 200 BC to around AD 100, but the first century AD is the mostprobable guess. The song, the melody of which is recorded, alongside its lyrics, in the ancient Greek musical notation, was found engraved on a tombstone, a stele, near Aydın, Turkey (not far from Ephesus). It is a Hellenistic Ionic song in either the Phrygian octave species or Iastian tonos. While older music with notation exists (for example the Hurrian songs), all of it is in fragments; the Seikilos epitaph is unique in that it is a complete, though short, composition. The Epitaph was discovered in 1883 by Sir W. M. Ramsay in Tralleis, a small town near Aidin. According to one source the stele was then lost and rediscovered in Smyrna in 1922, at about the end of the Greco-Turkish War of 1919–1922.

According to another source the stele, having first been discovered during the building of the railway next to Aydin, had first remained at the possession of the building firm’s director Edward Purser, where Ramsay found and published about it; in about 1893, as it “was broken at the bottom, its base was sawn off straight so that it could stand and serve as a pedestal for Mrs Purser’s flowerpots”; this caused the loss of one line of text, i.e., while the stele would now stand upright, the grinding had obliterated the last line of the inscription. The stele next passed to Edward Purser’s son-in-law, Mr Young, who kept it in Buca, Smyrna. It remained there until the defeat of the Greeks, having been taken by the Dutch Consul for safe keeping during the war; the Consul’s son-in-law later brought it by way of Constantinople and Stockholm to The Hague; it remained therein until 1966, when it was acquired by the Department of Antiquites of the National Museum of Denmark (Nationalmuseet), a museum situated at Copenhagen.

« Ancient Peruvian priests used drugs to control their followers …
The Library of Trinity College in Dublin: A 300-year-old institution, home to over 200,000 books »