Every day for the past 146 years, a mysterious submarine wreck has ‘surfaced’ at low tide

Nearly 14 years ago an archeologist and diver, Jim Delgado, found something magnificent.  He was on a ship passing the San Telmo Island in Pearl Archipelago, Panama when it occurred to him that the area was known for a sunken Japanese WWII submarine.

Intrigued by the story and the history behind the possible wreck, Delgado wondered about initiating a mission to find it.  Luckily, from his ship he saw something towering on the island.  It was all rusted out and Delgado felt he had to go investigate. 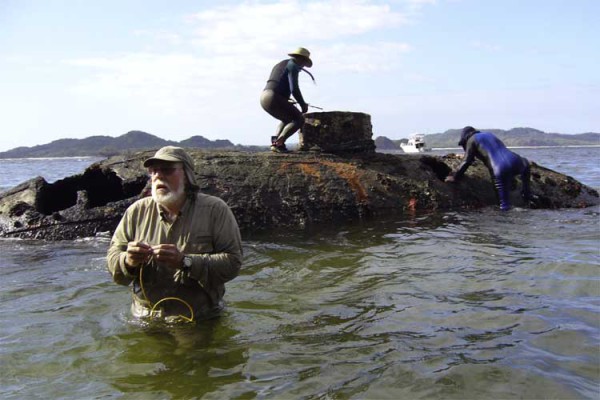 The submarine’s rusting hull was well-known to locals, but they had presumed it to be a remnant of World War II. Youtube

But if the sunken submarine was Kroehl’s, then why would it be in Panama if it was only tested in a New York river? After more research, Delgado found out that the first trial was actually successful; that the submarine was then taken to Panama to be used for collecting pearls.  It is said that the submarine actually lasted a few weeks while collecting pearls, however, something must have gone terribly wrong to leave it rusted out in the middle of an ocean.

The submarine managed to harvest pearls successfully for a while.  In 1869 another New York Times article stated that one of the pearl-harvesting missions brought up almost 10 tons of oysters and pearls which estimated about $2,000.