Water puppetry (Vietnamese: Múa rối nước, litterally: “Making puppets dance on water”) is a Vietnamese tradition that dates back as far as the 11th century and is thought to have developed in the villages of the Red River Delta area of northern Vietnam. For centuries, Vietnamese kids and grown-ups alike have been entertained by this unique kind of puppet show. Dance of the water fairies. Source The themes of play range from day-to-day lives to Vietnamese folk tales and legends that are told by grandparents to their grandchildren. Up to 8 puppeteers stand in chest-deep pool of water, behind a curtain backdrop, and control wooden puppets via poles and strings hidden under the water, making the puppets dance over the water’s surface. The water not only hides the puppet strings and puppeteer movements, it also provides opportunities for effects such as waves and splashes and shimmering lights. The shows are performed in a waist-deep pool. Source Using large rods to support the puppets it appeared as if they were moving across the water with the puppeteers hidden behind a screen. Source The puppets enter from either side of the stage or emerge from the murky depths of the water. Source

The water not only acts as the stage for the puppets but as a symbolic link to the rice harvest as well. The original water puppet festivals were literally held inside a rice paddy, with a pagoda built on top to hide the puppeteers. The puppets are made out of wood and then lacquered. Source They often weigh up to 15 kg. Source

A traditional Vietnamese orchestra provides background music accompaniment. Singers of chèo (a form of opera originating in north Vietnam) sing songs which tell the story being acted out by the puppets. The instrumentation includes vocals, drums, wooden bells, cymbals, horns, Đàn bầu (monochord), gongs, and bamboo flutes. The bamboo flute’s clear, simple notes may accompany royalty while the drums and cymbals may loudly announce a fire-breathing dragon’s entrance. The musicians and the puppets always interact during the performance. The orchestra accompanies the performance with traditional music. Source

Chú Tễu (“chú” means uncle, man, boy or Mr. in Vietnamese) is a recurrent and the most notable character in water puppetry. Tễu means “laugh” in ancient Vietnamese. This character usually introduces the performance and makes humorous actions for the audience. He often wears nothing but a loincloth, sometimes accompanied by a simple open vest. The world-famous Thang Long Water Puppet Theatre is one of the most popular tourist attractions in Hanoi and is considered to be one of the cultural highlights of Northern Vietnam. Puppeteers out on stage for the final act. Source

Today’s performances usually include a number of short sketches rather than one long story, taking the audience on a journey of ancient village life, agricultural harvests and dances of mythical creatures. 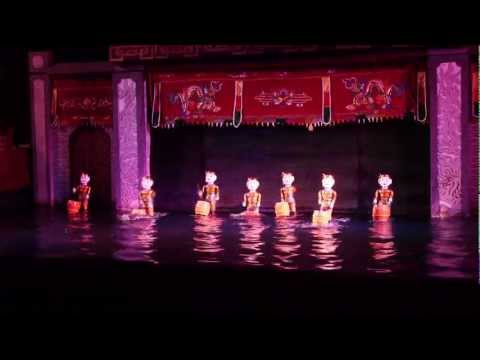