A Balkan World War II-era concentration camp, once occupied by Italian forces under the rule of Benito Mussolini, would become a luxury beachside resort

Mamula is one of the best preserved 19th-century Austro-Hungarian fortresses built on the small uninhabited islet in the Adriatic Sea, within the southwestern Montenegrin municipality of Herceg Novi. The fort was built in 1853 by Austro-Hungarian general Lazar Mamula and takes up about 90% of the island’s surface area. It was part of the Austro-Hungarian Army’s contingency plans for preventing the enemy entrance into Boka Kotorska. Located between Prevlaka and Luštica peninsulas at the entrance to the Boka Kotorska bay. Image: Wikipedia/CC BY 2.5 The fort takes up about 90% of the island’s surface area. By Atraktor Studio/Flickr/CC BY 2.0

The island became most notorious during World War II when the fascist forces of Benito Mussolini’s Kingdom of Italy converted the Mamula fort into a concentration camp. The concentration camp held more than 2,000 people and was known for torture and cruelty to prisoners. Most of the camp’s prisoners came from the neighboring area.

From May 30, 1942, until the end of the war, Benito Mussolini’s forces used Mamula Island to house thousands of prisoners. By Hons084 / Wikimedia Commons, CC BY-SA 4.0 Dozens of prisoners were tortured and killed, while others died of starvation. By Hons084 / Wikimedia Commons, CC BY-SA 4.0

After the closure of the concentration camp, Mamula and the rest of the buildings were left to molder. No one has lived on the island since. The fortress nowadays represents one of the biggest and best preserved Austrian fortifications on the Adriatic, characterized by monumentality, prominent building precision and perfect functionality of form. The rocky isle of Lastavica is of a circular shape and with a diameter of about 200m. By Hons084 / Wikimedia Commons, CC BY-SA 4.0 The government of Montenegro approved a plan to transform this former World War II concentration camp into a luxury beach resort with a nightclub, spa and restaurants. By Hons084 / Wikimedia Commons, CC BY-SA 4.0

Montenegro’s officials have a plan to refurbish the crumbling fort and in early January 2016, the government of Montenegro (over the objections of those who were once imprisoned on the island while it was occupied by Italian forces) approved a plan to convert the site of this former concentration camp into a luxury beach resort by Switzerland-based Orascom Development Holding AG under a 49-year lease deal. The price tag of this venture is an estimated 15 million Euro and the fortress would be scrubbed of its darkness to the point of being unrecognizable. 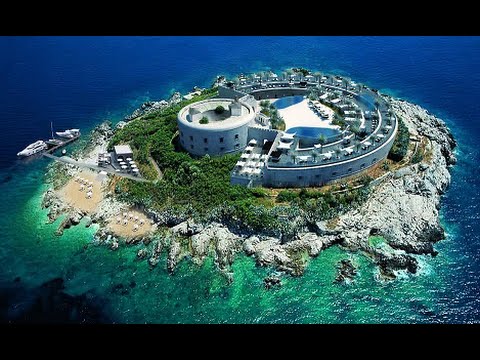