Some were taken over 100 years ago. Think about how we take for granted the modern day image – we have more on our smartphones than ever before. Now take into account the fact that we are used to seeing WWI in black and white so when you see them in colour – they have a major impact. The war seems very ‘real’ all of a sudden. Brings a different dimension to it.

As you may know, we are big fans of the Facebook page WWI Colourised Photos. Not only do they produce beautiful colourised images but they also spend a great deal of time researching each image, which just helps to keep history alive. Again, don’t forget to follow them on Facebook 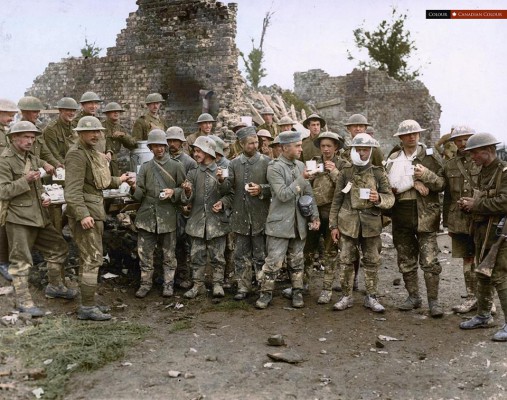 German and Canadian wounded receive hot coffee and biscuits from a YMCA hut near the front lines. November 24, 1917 Source – Photographs and a scrapbook of newspaper cuttings and other records relating to the life and service of Brigadier General W.O.H. Dodds, CMG, DSO, in the Great War of 1914-1918 and extending to his death on 25 August 1934. Brigadier General Dodds joined the Canadian Expeditionary Force in 1914 and was commanding officer of the 5th Canadian Division Artillery and served in France from 1917-1918. (Colourised by Mark at Canadian Colour) https://www.facebook.com/canadiancolour 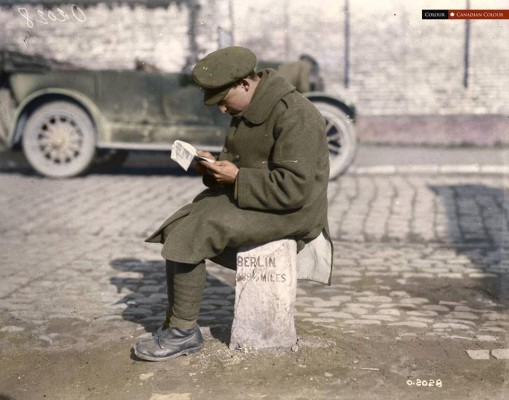 Canadian Corporal Percy Reeves, assistant to Official War Photographer, Lt. William Rider-Rider resting in Flanders 1916. Before the war William Rider-Rider was a photographic journalist living in Westminster and working for the Daily Mirror. He enlisted in the Suffolk Regiment in June 1916, by which time he had moved to the Wild Street estate with his wife and their young son. Because he wore glasses he was not sent to fight but instead became an Army gymnasium instructor. However, the Canadian military forces made an official request for him to be transferred so that he could work for them and take battlefield photographs, replacing a man who had also worked for the Daily Mirror. He was given the honorary rank of lieutenant and had a knack of positioning himself at the centre of the action. He took 2,800 photos and was awarded the MBE for his services to war photography. (Colourised by Mark at Canadian Colour) https://www.facebook.com/canadiancolour 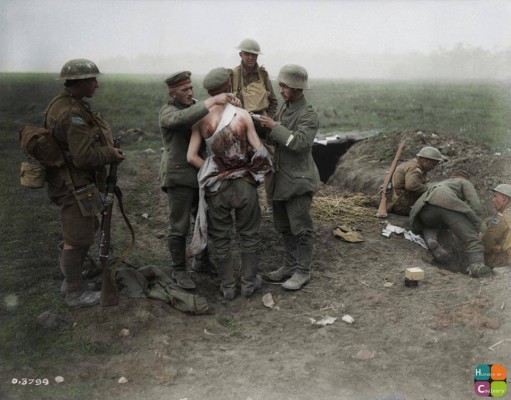 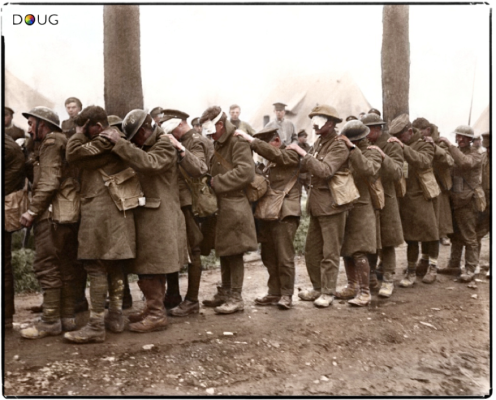 British 55th (West Lancashire) Division troops blinded by a gas attack, await treatment at an Advanced Dressing Station near Bethune during the Battle of Estaires, Nord-Pas-de-Calais on the of 10 April 1918, part of the German offensive in Flanders. The bandages were normally water-soaked to provide a rudimentary form of pain relief to the eyes of casualties before they reached more organized medical help. © IWM (Q 11586) (Colourised by Doug from the UK) https://www.facebook.com/ColouriseHistory?ref=hl 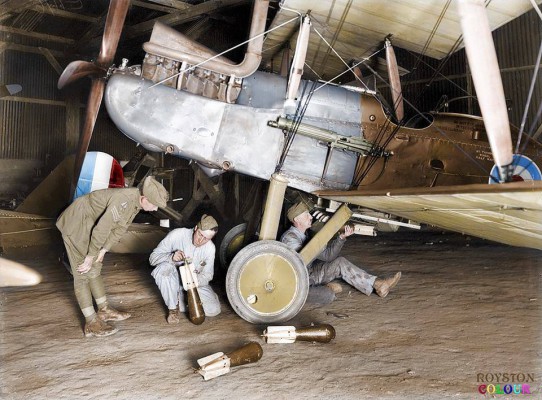 An unidentified member of the 69th Australian Squadron, later designated No. 3 Australian Flying Corps (AFC), fixing incendiary bombs to an R.E.8 aircraft at the AFC airfield north west of Arras. Savy, Nord Pas de Calais, 22nd, October 1917. The entire squadron was operating from Savy (near Arras) on 22 October 1917, having arrived there on 9 September after crossing the channel from the UK. 69 Squadron was temporarily attached to the RFC while they gained experience on the Arras front. They began moving to a more permanent base at Bailleul on 12 November, operating as a full Corps squadron attached to 1 Anzac Corps. The last AFC aircraft and personnel left Savy on 16 November 1917. (Source – Australian War Memorial’s collection – ID Number: E01176 – Maker: James ‘Frank’ Francis Hurley) (Colourised by Royston Leonard from the UK) https://www.facebook.com/pages/Colourized-pictures-of-the-world-wars-and-other-periods-in-time/182158581977012 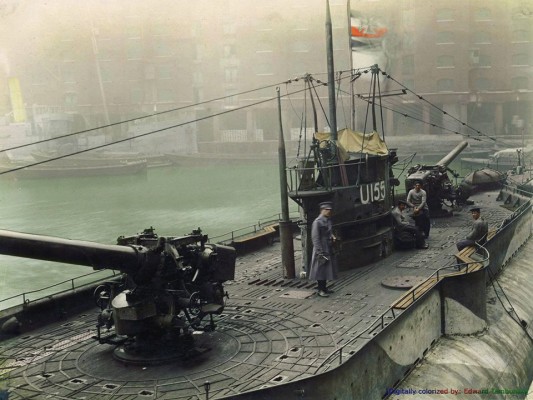 The German submarine U-155 on display in St. Katherine docks, London, England, December 1918. The SM U-155 (formerly merchant submarine “Deutschland”) was a Type U-151 U-Kreuzer of the Kaiserliche Marine during World War I. Built at Flensburger Schiffbau, she was launched on 28 March 1916 as merchant submarine “Deutschland” Deutschland was a blockade-breaking German merchant submarine used during World War I. It was developed with private funds and operated by the North German Lloyd Line. She was one of the first of seven U-151 class U-boats built and one of only two used as unarmed cargo submarines.(Colorized by Edward Tambunan) https://www.facebook.com/kolorierte.unterseeboote.von.edwardtambunan 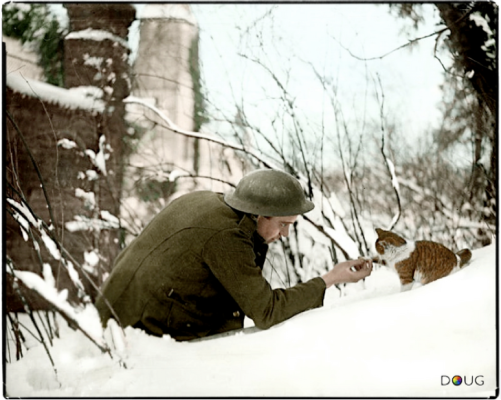 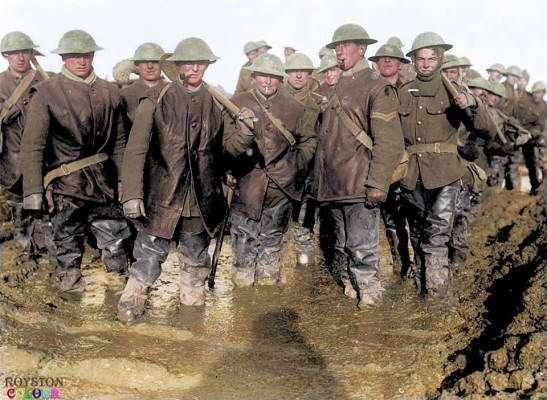 British soldiers standing in mud on the front lines in France. ca. 1917. They all wear the British Army issue black rubber ‘trench waders’. Waders were classified as trench stores and issued to soldiers engaged in duties that required them to work in deep water and mud – especially common in the trenches during the winter months. (Source – National Library of Scotland) (Colourised by Royston Leonard from the UK) https://www.facebook.com/pages/Colourized-pictures-of-the-world-wars-and-other-periods-in-time/182158581977012 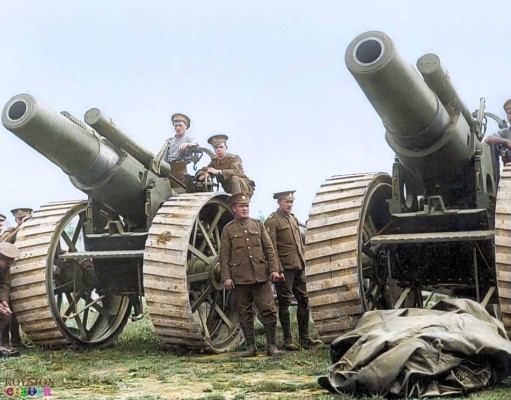 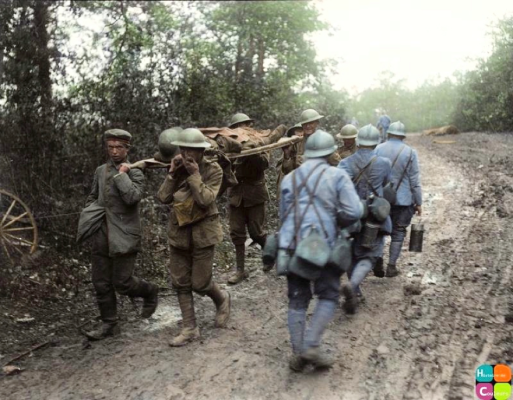 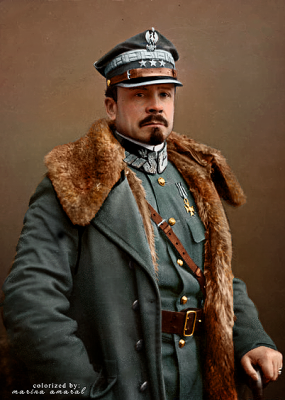 Józef Haller von Hallenburg (August 13, 1873 – June 4, 1960) was a Lieutenant General of the Polish Army, a legionary in the Polish Legions, harcmistrz (the highest Scouting instructor rank in Poland), the President of the Polish Scouting and Guiding Association (ZHP), and a political and social activist. He was the cousin of Stanisław Haller de Hallenburg. (Colorized by Marina Amaral from Brazil) https://www.facebook.com/marinamaralarts?fref=nf 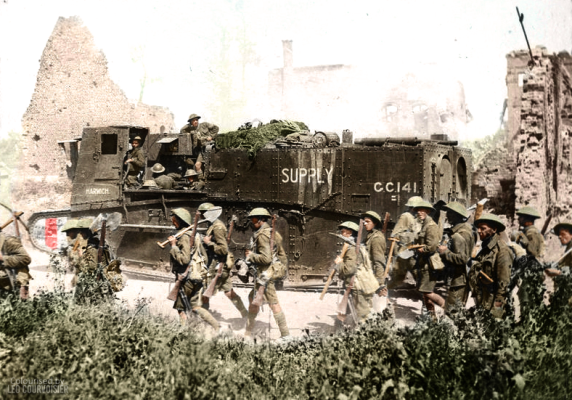 British gun carrier Mk I “Harwich”, serial number GC 141 moving up with supplies to the forward area, August-September 1918. The Gun Carrier was suggested as a companion machine to the Mark I Tank, to carry forward medium artillery and ammunition over shell-torn ground covered with old and new trench systems. Forty-eight Gun Carriers were built (two similar machines were completed as Salvage Tanks), the majority of them by Kitson & Co at Leeds, by July 1917. The camouflage schemes used on Gun & Supply Carriers into two categories: The earliest scheme was a Light Medium Grey overall, but only experimental or training vehicles seems to have been painted in this way. All Gun & Supply Carriers used in action in France appears to have been painted the same way that the Tanks were painted, i.e. Dark Khaki Brown Overall. (Source © IWM Q 48200) Colorised by Leo Courvoisier https://www.facebook.com/pages/Greetings-from-the-trenches/830845900362286?fref=nf 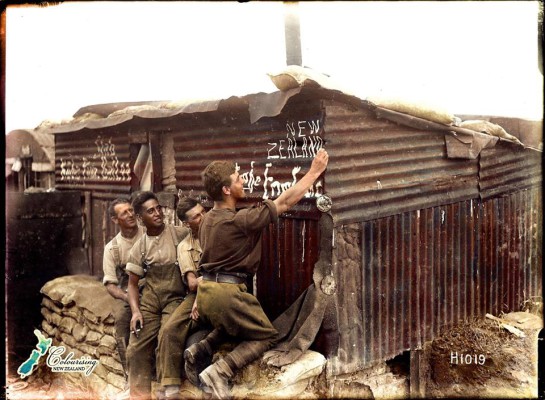 New Zealand soldiers in a captured German dugout, they are possibly engineers of the NZ Pioneer Battalion in the area of Grévillers in August 1918 A New Zealand soldier writes `New Zealand’ on the outside of a corrugated iron building to the enjoyment of the other three soldiers who watch. Taken by Henry Armytage Sanders. Royal New Zealand Returned and Services’ Association New Zealand official negatives, World War 1914-1918. (Source – Alexander Turnbull Library, Ref: 1/2-013585-G http://natlib.govt.nz/records/22307691) (Colourised by Brendan Graham from New Zealand) https://www.facebook.com/ColourisingNZ?fref=nf 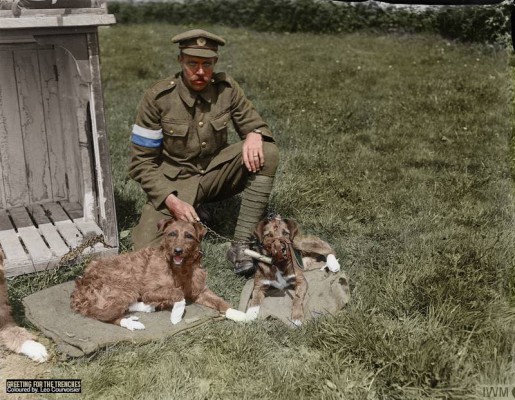 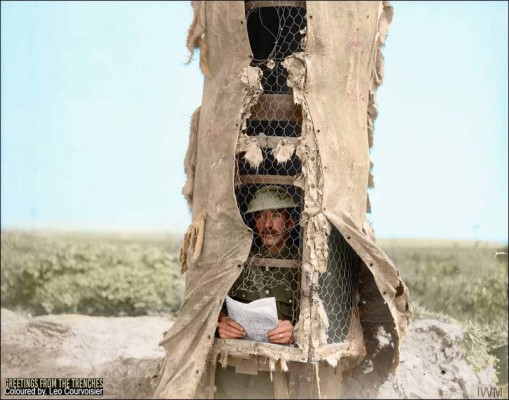 ‘Camouflage Trees’ The back of a canvas and steel tree observation post, near Souchez, Pas-de-Calais, France. 15 May 1918. Trying to hide yourself in No Man’s Land during the war was a risky business. The badly damaged landscape gave no real cover from the watching eyes on either side. Therefore, the ability to spy on the opposite trenches whilst remaining hidden was highly valuable. To achieve this, both sides began to develop Observation Post Trees (O. P. Trees) made of iron, canvass and sheet metal. Designed to replicate the shell splintered trees that existed in No Man’s Land, these observation posts were originally constructed behind the lines. Then, once they were nearing completion, during the darkest nights engineers would cut down or remove existing trees and replace them with the false one. From these fake trees observers and snipers were now able to watch the enemy whilst effectively hiding in plain sight. The British Army used around 45 Observation Post Trees during the conflict with the first being placed near Ypres. (eastsussexww1.org.uk) (Source © IWM Q 10308) McLellan, David (Second Lieutenant) (Photographer) Colorised by Leo Courvoisier https://www.facebook.com/pages/Greetings-from-the-trenches/830845900362286?fref=nf 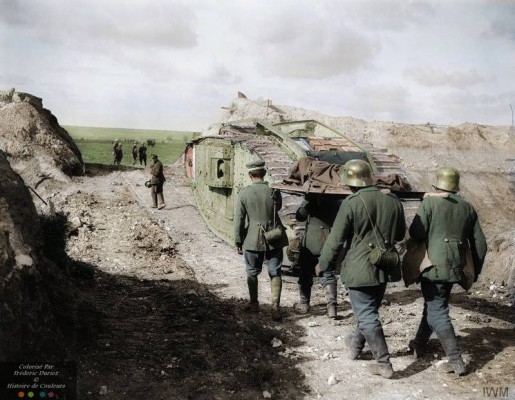 Battle of the Canal du Nord. German prisoners, carrying a wounded man, follow a British Mk.IV tank of ‘A’ Company 7th Battalion, Tank Corps through a cutting made in the bank of the Canal du Nord near Moeuvres, after the capture of Bourlon Wood on 27th September 1918. 7th Battalion were with the 4th Division, Canadian Corp, 1st Army. The Battalion had 16 MKIV tanks in action on 27th September 1918 (Source – IWM – Q 9345) Photographer, Second Lieutenant David McLellan. (Colorised by Frédéric Duriez from France) https://www.facebook.com/pages/Histoire-de-Couleurs/695886770496139 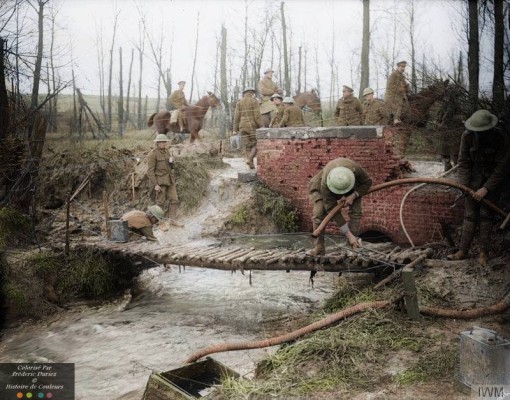 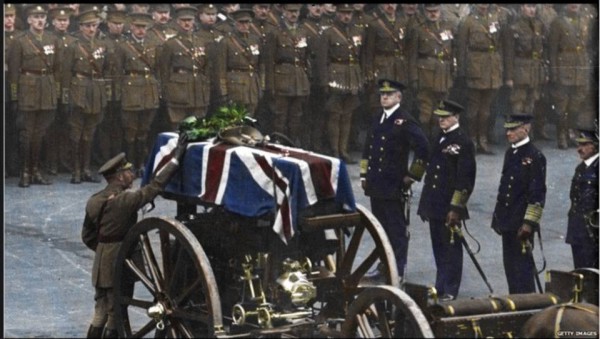 …….the following morning, 11 November 1920, the casket, covered with the Union Flag, on which was placed a steel helmet and side arms, was placed onto a gun carriage of the Royal Horse Artillery drawn by six horses and led by a Firing Party and the Regimental bands of the Brigade of Guards, set off through immense and silent crowds. As the cortege set off, a further Field Marshal’s salute was fired in Hyde Park. The route followed was Hyde Park Corner, The Mall, and to Whitehall where the Cenotaph, a “symbolic empty tomb”, was unveiled by King-Emperor George V. At the Cenotaph, the carriage halted and KingGeorge placed a wreath of roses and bay leaves (the Poppy Appeal did not begin until 1921) on the coffin. 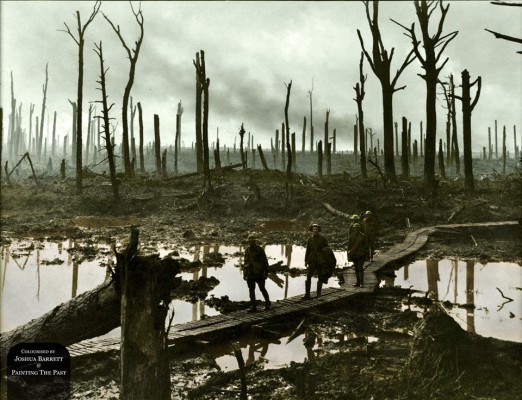 May all those who have fallen in combat and suffered in war rest in peace. And may we learn from the suffering, sacrifices, atrocities and heartache of war so that we may strive for peace and make their sacrifices not in vain. “Soldiers of an Australian 4th Division field artillery brigade on a duckboard track passing through Chateau Wood, near Hooge in the Ypres salient, 29 October 1917. The leading soldier is Gunner James Fulton and the second soldier is Lieutenant Anthony Devine. The men belong to a battery of the 10th Field Artillery Brigade.” AWM E01220 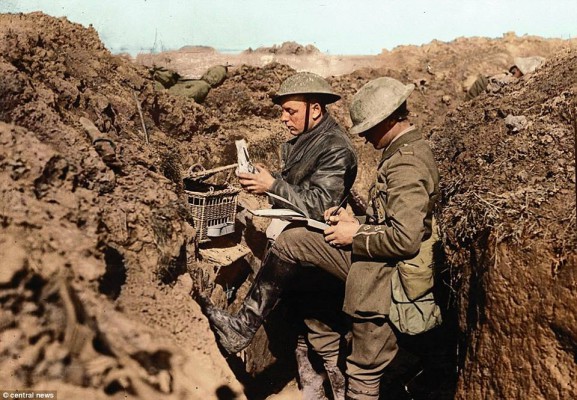 Pigeon post: Pigeons were often used to carry messages from the front line when radio, Morse code and human runners had failed. Here an officer (far right) writes a message as the pigeon’s handler, having removed the bird from its cage, holds it upside down to attach the note. c.1917 (Colourised by Frank Augrandjean from the UK, shared here with his permission) 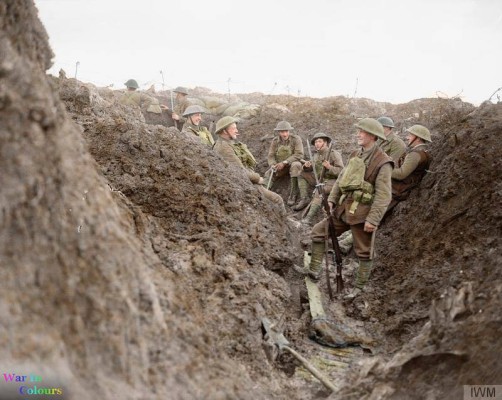 Men of 6th Battalion, York and Lancaster Regiment, 32nd Brigade, share a joke and a cigarette amid mud in a trench at Cambrin, 6 February 1918. The 6th (Service) Battalion was raised at Pontefract in Yorkshire in August 1914. It arrived on the Western Front in July 1916 with 11th (Northern) Division. During the war the York and Lancaster Regiment raised 22 battalions, suffering over 48,000 casualties out of the 57,000 men who served. 8,800 of the latter were killed. (Source – IWM Q8458) (Photographer – Second Lieutenant David McLellan) 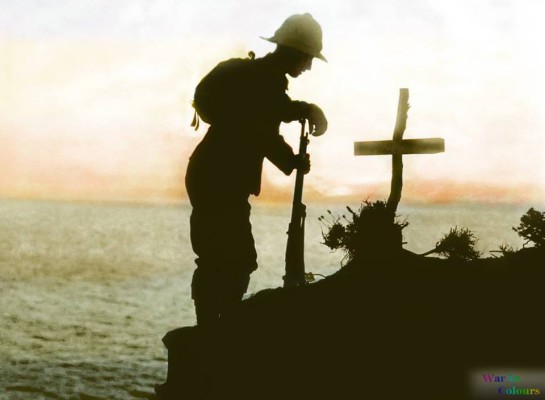 A British soldier visits a comrade’s grave at sunset on the cliffs above Cape Helles, Gallipoli in 1915. (Colorised by Gabriel Bîrsanu from Romania) https://www.facebook.com/War-In-Colours-508317129316864/… 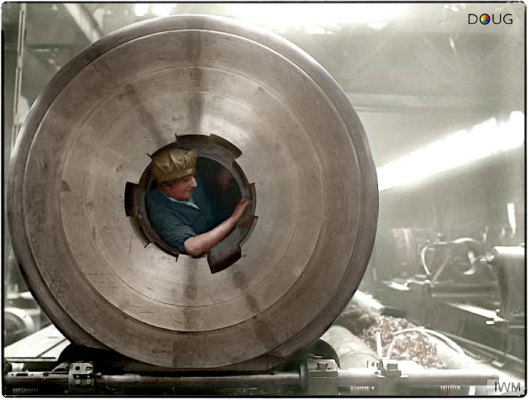 ARMS PRODUCTION IN BRITAIN DURING THE FIRST WORLD WAR A female worker cleans the rifling of a 15-inch gun after being lifted inside the barrel in the Coventry Ordnance Works, Warwickshire during the First World War. (Source -IWM Q 30135) Photographer – Horace Nicholls (Colourised by Doug) 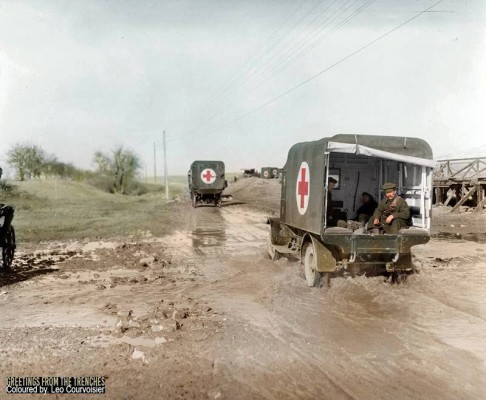 British motor ambulances passing through the bed of a small river in Macedonia, 1916. The Salonika Front is arguably one of the most forgotten in terms of where British and Commonwealth troops served in the Great War. British troops were sent to the region in 1915 to help the Serbians, who were already beaten by the time the first soldier landed. However, a complex relationship with neighbouring Greece lead to thousands of British troops, later joined by French, Italians and Russians, facing the Bulgarian Army, an ally of the Central Powers, on the Salonika front. Again it mirrored the Western Front with an extensive trench system and while there were big battles here, especially in the final phase of operations in 1918, the greatest threat was from disease, especially malaria. By the end of the campaign more than 10,600 British soldiers had died in Salonika, many of disease rather than from bullets or shells. (Source © IWM Q 31652) Colorised by Leo Courvoisier https://www.facebook.com/pages/Greetings-from-the-trenches/830845900362286?fref=nf 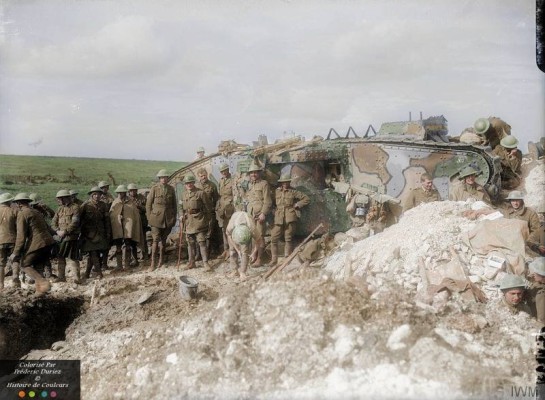 Battle of the Somme. Battle of Flers-Courcelette. A Brigadier and his staff outside Tank 17 of D Company, which was used as his Headquarters. Near Flers, 21st September 1916. Brooks, Ernest (Lieutenant) (Photographer) (Source – IWM Q 2487) (Colourised by Frédéric Duriez from France) https://www.facebook.com/pages/Histoire-de-Couleurs/695886770496139

« The Pirate Cemetery of Madagascar. Ile Sainte-Marie was the off-season home of an estimated 1,000 pirates
The real story behind…A boy left his bike chained to a tree when he went away to war in 1914 »