The eerie ghost fleet at Suisun Bay: A collection of U.S. Navy and merchant reserve vessels that has been in the bay since the end of World War II

This collection of U.S. Navy and merchant reserve vessels, known as the Suisun Bay Reserve Fleet (SBRF) and the Mothball Fleet, was created by the U.S. Maritime Administration following World War II to serve as a pool of potential backups for national defense.

It is located on the northwest side of Suisun Bay (the northern portion of the greater San Francisco Bay estuary). The fleet is within a regulated navigation area that is about 4 1/2 miles long and 1/2 mile wide. Closeup of ships of the US National Defense Reserve Fleet laid-up in Suisun Bay, By USGS/Wikipedia/Public Domain Aerial photograph of ships in Suisun Bay. By jitze/CC BY 2.0 Once most of the ships entered the Reserve Fleet, but they never left. By NOAA’s National Ocean Service/Flickr/CC BY 2.0 Many of these ships were removed for sale as scrap metal during the 1990s, but over 80 ships still remained at anchor in the bay, including the WWII battleship USS Iowa (BB-61) which once served as the transport vessel for President Roosevelt, and fought in the Pacific during both WWII and the Korean War. SS Cape Corda, SS Cape Brenton, and others as they appear today. By Earthpig/CC BY-SA 3.0 SS Cape Breton as she appears today. By Earthpig/CC BY-SA 3.0 A program is in place to tow the rustiest ones away for recycling. By Ingrid Taylar/Flickr/CC BY 2.0 Now greatly reduced in number, soon there will be fewer still. By Earthpig/CC BY-SA 3.0

Throughout the years, these ships have caused a stir with environmentalists. The State of California and several environmental groups have raised concerns about the environmental impacts of the fleet.

Potential environmental concerns include heavy metals and antifouling agents in the paint that is peeling off of the vessels, as well as polychlorinated biphenyl (PCBs) and other hazardous materials that may have been released. USS Vancouver (LPD-2) as she appears today. By Earthpig/CC BY-SA 3.0 All the obsolete ships currently located at the site will be cleaned of flaking paint within 2 years. By Jack Snell/Flickr/CC BY-ND 2.0

The fleet is under surveillance and trespassing is strictly prohibited. In January 2016, the Department of Transportation and MARAD have officially announced the fleet closure in February 2017. All remaining ships currently located at the site will be sold at auction or scrapped. 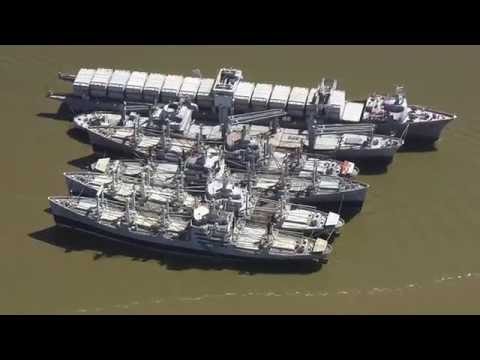 « The act of drinking tea in the UK was introduced in 1662 by a Portuguese queen
There is a church in Rome lined with skeletons and a plaque that reads, “What you are now, we once were; what we are now, you shall be.” »