Fra Mauro, an Italian cartographer who lived in the Republic of Venice, was a monk of the Camaldolese Monastery of St. Michael where he maintained a cartography workshop.

With strong dedication, long before the famous Earthrise photo taken by Apollo astronauts, he created the most detailed and accurate map of the world, the Fra Mauro Map, which is considered the greatest memorial of medieval cartography. It was made around 1450, and it looks like a circular planisphere drawn on parchment and set in a wooden frame that measures over two by two meters. It took several years to complete and was very expensive to produce. Shipes of the world. Image by:  Wikipedia/ Public Domain

The map was not created by Fra Mauro alone, but by a team of cartographers and artists who were led by him. All together, they created the largest extant map from early modern Europe. The map includes Asia, the Indian Ocean, Africa, Europe, and the Atlantic. It was likely influenced by Arabic accounts, as the map is oriented with South at the top because upon close examination of the map, the outline of the Mediterranean Sea, the boot of Italy, and the Black and Caspian Seas are clearly visible. Map of the Near East. Image by: Wikipedia/Public Domain

The map contains hundreds of detailed illustrations and more than 3000 descriptive texts. For the illustrations, Mauro used a range of expensive colors: red, brown, blue, turquoise, green, and black are among the pigments used. The descriptive texts describe the various geographical features on the map as well as related information about them. Chinese ship on the map. Image by: Wikipedia/Public Domain Castles and cities are identified by pictorial glyphs representing turreted castles or walled towns, distinguished in order of their importance. Image by: Wikipedia/Public Domain

At that time, only those who traveled could describe distant lands. Mauro listened to their stories and painted a portrait of our planet. The text on the map mentions many of these travel accounts. One of the primary sources were accounts of the journeys of Italian merchant and traveler Nicolo de Conti and the book of travels of Marco Polo, in particular about East Asia. 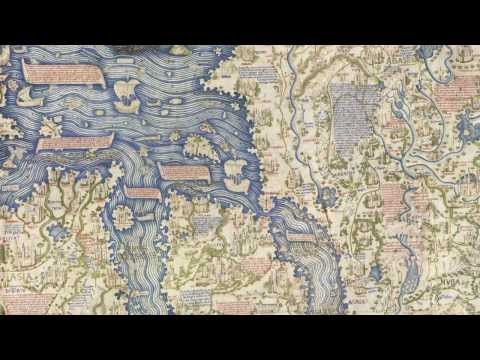 « No Dog Allowed:Lord Byron at Trinity College kept a pet bear instead as there were no rules against having one
Observation balloons – the early ‘drones’ »