The Musée Mécanique is one of the world’s largest privately-owned collections of mechanically operated musical instruments and antique arcade machines, featuring everything from turn of the century hand-cranked music boxes to modern video arcade games, all collected by San Francisco resident Edward Zelinski. Entrance to the Musée Mécanique. By User Piotrus/CC BY-SA 3.0

Zelinsky began acquiring machines at the age of 11. Nowadays his collection contains more than 300 items mechanical entertainment devices, ranging from full mechanical orchestras in which the instruments play themselves to antique slot machines. His games were exhibited in the 1920s at Playland, but in 1972 Playland closed and Musée Mécanique became a part of the Golden Gate National Recreation Area. The museum moved into the basement of the famed Cliff House, just a few blocks north and across the Great Highway from the Playland site. The museum has many rare and historical pieces. A large diorama of a traveling carnival with a Ferris wheel and other rides sits in the center of the museum. The museum owns what is believed to be the only steam-powered motorcycle in the world, built in Sacramento, in 1912. The Royal Court diorama features couples ballroom dancing and was featured in the Panama–Pacific International Exposition. Laffing Sal, which has been described as “famously creepy”, is a 6-foot-tall, laughing automaton and a copy of the original. Some of the most interesting machines are the ones made by prisoners at Alcatraz, including elaborate creations using toothpicks. The museum is now located at Fisherman’s Wharf in San Francisco, California, and run by Dan Zelinsky, the son of the original owner. The museum move instigated protests against the move by San Francisco locals. An online petition was created to protest the closure of the museum, with over 12,000 signatures being collected. Many of the protesters were emotional due to the historical and nostalgic meaning of the museum due to its history at Playland. Many were also unaware of the museum’s for-profit status, and many attempted to donate to the museum to keep it at its current location. Despite the public frustration, Dan Zelinsky remained excited about the move, understanding the historical and emotional connections that San Francisco locals held for the museum: “You have to understand that people grew up with these kind of machines . . . . To the generation before, these were the video games. Many visitors haven’t been here since childhood, but when they walk through that door, they are going back in time.” Original plans were slated to have the museum return to the Recreation Area in 2004, upon completion of construction, however, the museum remains at Fisherman’s Wharf. Despite the locals’ love for the original location, National Public Radio described the original space at the Recreation Area as “cramped, noisy, damp and a little dingy”. 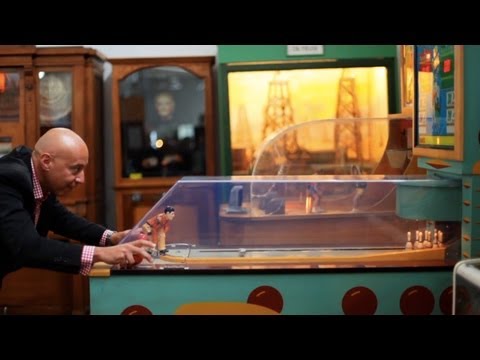 « Clement Vallandigham – A defence lawyer who accidentally shot himself while trying to prove that someone shot himself. He died and the defendant was set free
Windber Trolley Graveyard: An apocalyptic trolley graveyard sitting out deep in the woods of Pennsylvania »