Hon-en-Katedrall (sometimes spelled “Hon-en-Katedral”) was an art installation, created by the Swiss painter and sculptor Jean Tinguely, that was shown at Moderna Museet in Stockholm in 1966. Born in Fribourg, Tinguely grew up in Basel but moved to France in 1952 with his first wife, Swiss artist Eva Aeppli, to pursue a career in art. He belonged to the Parisian avant-garde movement in the mid-twentieth century and was one of the artists who signed the New Realist’s manifesto (Nouveau réalisme) in 1960. It was created in 1964 and shown at Moderna Museet in Stockholm in 1966. Source Tinguely was famous for his sculptural machines or purposeless kinetic artworks, known officially as meta-mechanics in the Dada tradition, which challenged the norms of bourgeoisie high society. The title, “Heureka,” is Ancient Greek for “I’ve got it!” but this is meant to be ironic. His art satirized the mindless overproduction of material goods in advanced industrial society. The kinetic sculpture represents a machine which has no purpose; The machine churns and churns in aimless absurdity. Part of the movement’s ideology was Tinguely was inspired by Dadaism. Source The sculpture stands as an allegory of consumerism in advanced industrial societies. Source Another sculpture, a self-destroying sculpture titled “Homage to New York,” made in 1960, only partially self-destructed at the Museum of Modern Art, New York City. His later work, “Study for an End of the World No. 2” (1962), detonated successfully in front of an audience gathered in the desert outside Las Vegas. Made from everyday objects like scrap metal and junk. Source Heureka was commissioned as an exhibit at the Swiss State Exhibtion in Lausanne in 1964; later bought by an industrialist and donated to the city of Zurich. The sculpture is made from everyday objects like tubes, wheels, forks and other metal details assembled together to create an intricate machine when turned on — or rather, the illusion of one. At 5:00 pm every afternoon his machine comes alive and bursts into useless energy. 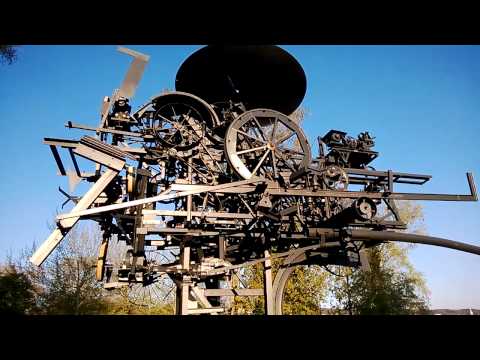 « Formed 60 million years ago, The Moeraki Boulders are unusually large and spherical boulders in New Zeland
Archaeologists believe they found a bone that belonged to the Buddha »