The Laxey Wheel: The largest working waterwheel in the world and a brilliant example of Victorian engineering

The Laxey Wheel (also known as Lady Isabella) is a brilliant example of Victorian engineering and the largest working waterwheel in the world. Built into the hillside above the village of Laxey on the Isle of Man, it is also one of its oldest operational waterwheels. One of the Island’s most dramatic tourist attractions for over 160 years. Photo Credit

It was named “Lady Isabella” after the wife of Charles Hope, who was the island’s governor at that time, and is housed in a distinctive red and white structure emblazoned with the emblem of the Isle of Man – an image of three legs forming a wheel, known as the Triskelion. Built to serve the extensive mines that occupied this part of the Isle of Man. Photo Credit

Designed in 1854 by local engineer Robert Casement, the wheel has a 72-foot-6-inch (22.1 m) diameter, is 6 feet (1.83 m) wide, and turns at approximately three revolutions per minute. It was used to pump 250 gallons of water a minute from the shafts of the Laxey mines some 200 yards away and 1500ft below ground. Most of the wheel is made of wood, but key mechanical parts and important tension and bearing surfaces are metal. The wheel has a whopping 192 wooden buckets, each with a capacity of 91 liters.

The largest surviving wheel of its kind in the world. Photo Credit1 PhotoCredit2 A water-powered wheel was used in lieu of a steam-powered pump due to the logistical issues involved with transporting coal to the site. The mine shaft from which the water was pumped was situated about 450 yards from the great wheel. The power from the wheel was transmitted to the pumping mechanism by a series of rods supported by and running along an imposing masonry viaduct. The mine, which closed in 1929, once employed over 600 miners and produced lead, copper, silver and zinc. In 1965, the wheel was purchased by the Isle of Man Government for £5,000 from the land-owner Edwin Kneale. Restoration work commenced soon after, and in 1989 it was put under the control of Manx National Heritage. It was once again set in motion at a grand re-opening ceremony. It was acquired by a local man who turned it into a tourist attraction. Photo Credit The Wheel has remained a great tourist attraction since and has been renovated by Manx National Heritage. Photo Credit The wheel still turns to entertain visitors before they climb to the top where they are rewarded with breathtaking views across the Glen Mooar Valley. Photo Credit

More than 160 years later, the wheel still turns (although it no longer pumps water) and remains the largest operating water wheel in the world, and one of the Isle of Man’s most popular tourist attractions. 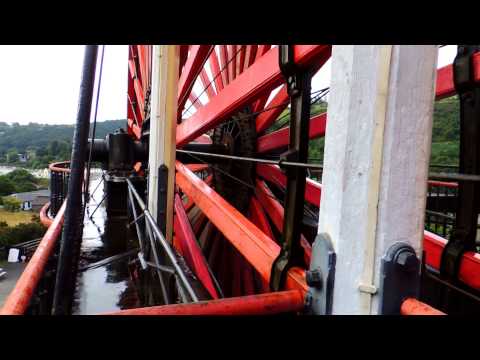 « The cursed Island of Gaiola: those who have lived there have met with a terrible fate
Brazen Bull: The Ancient Greek torture device considered to be one of the most gruesome creations of all time »