The 1939–40 New York World’s Fair was the second most expansive American world’s fair of all time, after St. Louis World’s Fair held in St. Louis, Missouri, in 1904.

While the main purpose of the fair was to lift the spirits of the United States and drive much-needed business to New York City, it was also felt that there should be a cultural or historical association.

It was therefore decided that the fair’s opening would correspond to the 150th anniversary of George Washington’s first inauguration as President of the United States and the WPA painted murals which appeared in the New York Times Magazine. All images New York Public Library Queue for the Futurama attraction Workmen stand amid the buildings of Futurama

The Fair was the Modern advancement of American enlightenment ideals: a democratized promised land, intended to uplift all citizens and serve as a shining example for the rest of the world, promoting the notion that economic prosperity would result for all those who believed. Miss Rosita Royce and the cast of the Crystal Palace show

It was a literal laboratory for a group of industrial designers who considered themselves both artists and social theorists. On April 30th, 1939, a very hot Sunday, the fair had its grand opening, with 206,000 people in attendance.

Many countries around the world participated in it, and over 44 million people attended its exhibits in two seasons. Participants included close to 60 nations, 33 states, and U.S. territories, and over a thousand exhibitors, among them some of the largest corporations in the United States. Frank Buck and his elephants Elephants from Frank Buck’s Jungleland bathing by the Perisphere

The exposition was themed on the “World of Tomorrow”, a theme which makes it all the more fascinating viewing today, more than 75 years later. Exhibits forecasted the houses and cities of tomorrow and presented streamlined trains, modern furnishings, television, and talking robots. Bud Abbott, dressed as Father Time, and Lou Costello as Time of Tomorrow, look at the “Talking Clock.” “Satan“, a 7-year-old Sumatra tiger, leaps through a flaming hoop Artist’s sketch of the American Jubilee A couple getting married on the parachute ride

As the official pamphlet explains:

“The eyes of the Fair are on the future — not in the sense of peering toward the unknown nor attempting to foretell the events of tomorrow and the shape of things to come, but in the sense of presenting a new and clearer view of today in preparation for tomorrow; a view of the forces and ideas that prevail as well as the machines. To its visitors, the Fair will say: “Here are the materials, ideas, and forces at work in our world. These are the tools with which the World of Tomorrow must be made. They are all interesting and much effort has been expended to lay them before you in an interesting way. Familiarity with today is the best preparation for the future.“

Another story from us: The lumberjacks who felled California’s Giant Redwoods

This site examines the social, cultural, and commercial impact of the Fair on the American way of life in the twentieth century. 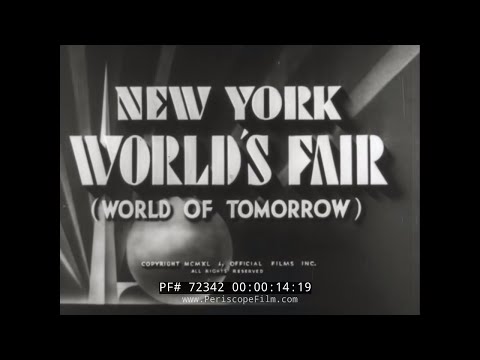 « The Mahabodhi Temple is one of the oldest brick structures in India
The most amazing Woman: Polish midwife risked her life & delivered 3,000 babies in Auschwitz »