Every century has its battle, and battles from different eras have been fought with various weapons. It’s amazing to see how the soldiers’ inventory has evolved over the years.

For instance, the soldiers of the 13th century were heading to battle equipped with a Kettle helmet and battle ax, the troops in the 16th century were using swords and daggers, and throughout World War I hand grenades were a regular part of every British soldier’s kit. The kit includes white cloth with a snip for cutting small items, a leather box of needles and a roll of thread fire steel a flint and tinder for starting a fire.Photo Credit Kit for a soldier in the Battle of Bosworth 1485 Here you can notice the Paldrons – to protect the shoulder; the left one is bigger because the left side was the defensive side. Photo Credit

Thom Atkinson, a UK-based photographer, documents the equipment of British soldiers over the course of 1,000 years. His series, entitled “Soldiers’ Inventories” captures the battle kits from The Battle of Hastings through the Battle of Agincourt in 1415 to the Falkland’s Conflict in 1982.

This is a kit from 1588 and is the first in the series that includes a gun. The kit includes a Cabaset (helmet) with a broad rim which provided good cover to face and back of neck. The helmet has cheek pieces that fold down.Photo Credit Here, you can notice the Matchlock Musket, which used a slow match to fire the main charge. The barrel was four feet long and fired a lead ball weighing 1/12th of a pound. Photo Credit Atkinson said that the vivid colors were to prevent soldier from shooting one of their own.Photo Credit Notice the Straight lasted shoes. The leather was rough side out and as they were straight lasted there was no right or left shoe; soldiers were expected to swop them around to prevent excessive wear on one sidePhoto Credit

During the 1854 Battle Of Alma The neatly organized gear, besides weapons, also included things like cards and checkerboards, which provide a glimpse of how the soldiers killed the boredom and monotony during a war. To gather the gear, the photographer visited living history communities, whose members collect it for such things as war reenactments.

The 9-month-long project was an educational experience for Atkinson: “I’ve never been a soldier. It’s difficult to look in on a subject like this and completely understand it. I wanted it to be about people. Watching everything unfold, I begin to feel that we are the same creatures with the same fundamental needs.” Entrenching tool handle; often the handle was customised with lumps of metal and made into a trench club Photo Credit 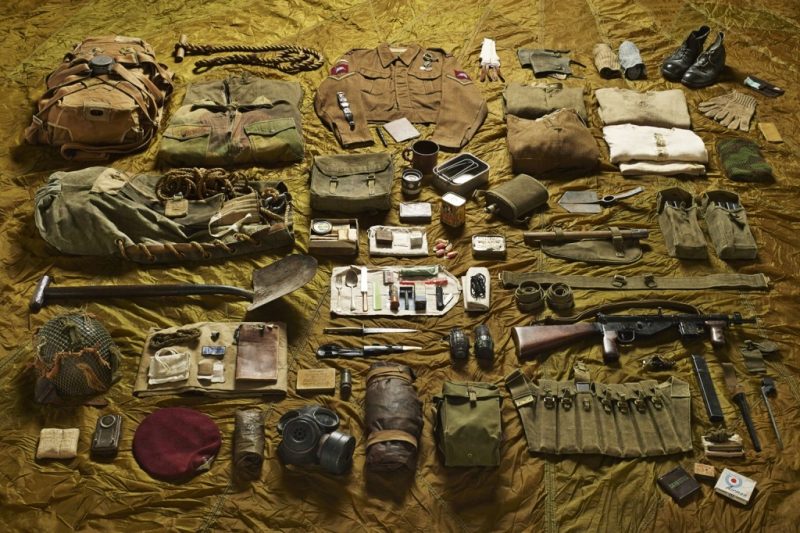 Jump smock camouflage first issued in 1942 (the pattern was only replaced in 1980) and over smock worn when jumping.Photo Credit

Visit this Thom Atkinson page to see more of his work. Here is another interesting story from us: Henry Moseley: an outstanding physicist who annulled enlistment of scientists in military service

The project shows the exceptional similarities and differences between soldier inventory separated by decades and perfectly captures the evolution of military weapon. Swords became guns, helmets became gas masks. While tools and arms have visibly evolved, the necessities remain the same.“The fact that certain objects recur is more fascinating than the ones that evolve,” said Atkinson, referring to the point that there is a spoon in every soldiers gear.

« The Arctic: An odd pinging noise that seems to be coming from the sea floor
Medieval well that was used for sin-washing has been uncovered »