Marie Lafarge was just another girl born in Paris in 1816 who lost her parents in her childhood and was raised by her maternal aunt and her husband, а secretary-general of the Bank of France.

Her aunt wasn’t very fond of Marie and even though she afforded her life in abundance, Marie was constantly reminded of her real place in the social hierarchy. She was schooled at the most expensive schools but had no dowry like that of her friends and colleagues. Now, all her life was about marrying – who is she going to marry?; How wealthy should the husband be, for example, with a dowry of 90,000 francs? Would a rich family accept her?… She already had turned 23 and all these questions remained unanswered, so one of her uncles took responsibility for finding her a husband through a marriage broker, a fact unknown to Marie.

At the same time, Charles Pouch-Lafarge engaged the same marriage broker as Marie’s uncle. Charles indeed had property and wealth inherited from his father, but by 1839 he ended up bankrupt and in debt due to bad business ideas.

Charles considered a good marriage the only way to pay his creditors. So he made a false advertisement, presenting himself as a wealthy iron master with property worth more than 200,000 francs with an annual income of 30,000 from the foundry alone. It was set for Marie and Charles to meet at the opera. Even though Marie found him repulsive, she trusted his claims of possessing estate and the recommendation letters written for him by his priest and local deputy. Their engagement was announced only four days after they met and after getting married, the couple left Paris for Le Glandier to live at the estate. 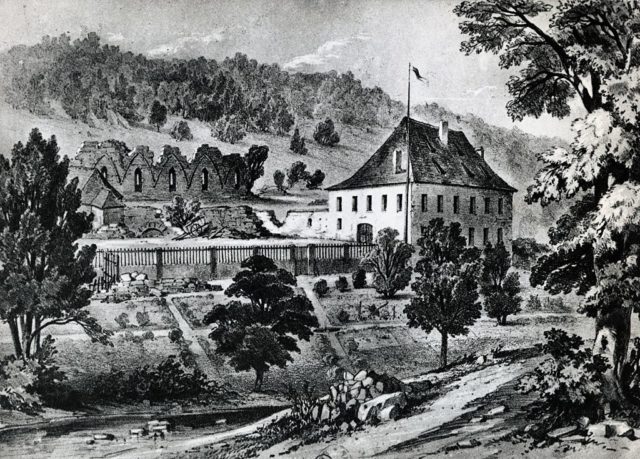 As Marie arrived at the property, a great disappointment encountered her. The house was set within the ruins of a former monastery, it was in disrepair, damp and rat-infested. Instead of noblemen, her in-laws were peasants who immediately disliked her. As soon as she entered her room, Marie locked herself inside it and wrote a letter to her husband imploring him to release her from their marriage, while threatening to take her life with arsenic. In the meantime, Marie’s husband was full of understanding, releasing her from the obligation to act as his wife, and they even developed a certain friendship. Marie lived in poverty but wrote letters to her friends about her supposed happy life on the estate. Only three months after the wedding, Lafarge was supposed to leave on a business trip to Paris, but before he left, she made a will bequeathing to her husband her entire inheritance, with the proviso that he would do the same for her. However, without noting her, he made another will soon, leaving the Le Glandier property to his mother instead.

When he left for Paris, Marie sent Lafarge a cake and a love letter. Only the cake was poisoned with arsenic. Feeling sick, Lafarge returned home soon asking for help. As there was a cholera outbreak in Paris, the doctor assumed that he might have it and started healing him. In meantime, Lafarge’s carrying wife was treating him with teas and soups in which she added arsenic. Lafarge died after a month of illness, and if it weren’t for his relatives who had already suspected Marie of poisoning him, his death would have been marked as cholera. However, Marie was caught and trialed, and her murder trial was so popular that people from all around Europe gathered to follow it. After twelve years in prison, Marie was finally released by Napoleon III. During her years in jail, she wrote memoirs and published them in 1841.

Read another story from us: About the Styrian people who ate Arsenic for breakfast

When released, Marie was already suffering from tuberculosis and died only a few months after her release. She protested her innocence until the very last day. She was buried in the cemetery of Ornolac.

« Alice Roosevelt, daughter of Theodore Roosevelt, made the headlines more than her father
During the “Little Ice Age”, Frost Fairs were held on the thick ice of the River Thames »